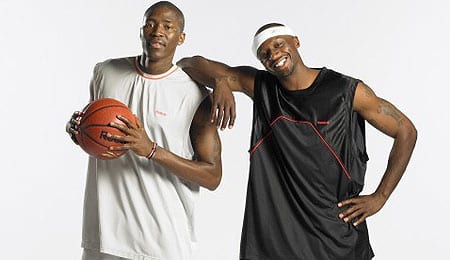 Jamal Crawford (left) could give his buddy Jason Terry a run as the NBA’s top Sixth Man.

The 2009-10 RotoRob NBA Draft Kit rolls on as we churn out yet another team preview. While we wait for the troubled Delonte West to join his teammates, let’s check in on the Atlanta Hawks, who will look to take another leap forward this season.

Once upon a time, the Atlanta Hawks were one of the NBA’s biggest doormats. The sad-sack 2004-05 version won just 13 games, then managed just 56 total victories over the next two campaigns. However, the team’s fortunes turned in the 2007-08 season, as the Hawks earned a playoff berth despite finishing below .500. No such luck was necessary last year, though, as Atlanta powered to 47 wins and a second-place finish in the NBA Southeast Division.

The run continued through the first round of the playoffs, but the clock struck midnight when the powerful Cleveland Cavaliers conquered the Hawks in four straight games. All things considered, though, the ’08-09 season was a wildly successful venture for the once-laughable franchise.

Atlanta addressed a few needs in the offseason, signing sharpshooter guard Jamal Crawford to provide offensive spark off the bench, then inking veteran forward Joe Smith to add depth to its thin (and undersized) frontcourt. This pair’s veteran presence should help to stabilize and augment the Hawks’ core of young talent, and make this an even more dangerous club in 2009-10.

Hawk coach Mike Woodson is optimistic about his team’s chances to not only match last year’s performance, but to make a deeper run come playoff time. Whether that happens remains to be seen, but what is certain is that — for the first time in many years — Hawk fans are actually looking forward to the start of the season.

The team’s starting five is pretty well set, with Crawford and Smith likely to be the first small and big off the bench, respectively. Keep an eye on point guard Mike Bibby’s minutes, though, as Crawford’s arrival will almost certainly affect Bibby in a negative manner.

Johnson flies beneath a lot of Fantasy radars, but Atlanta’s shooting guard logged his fourth consecutive outstanding season in ’08-09. He not only averaged 21.4 PPG last season, he also tossed in 149 treys, grabbed 4.4 boards per game and – here’s the big news – handed out a hefty 5.8 assists per game for the second straight season. That number bested many of the league’s point guards (including teammate Bibby), giving Johnson that extra “something” that lands him in the second tier of Fantasy two-guards.

There is some concern that new acquisition Crawford may erode some of his numbers this season, but Johnson is talented enough to rack up the stats even if he loses a few minutes here and there. He’ll also be an unrestricted free agent after the ’09-10 season, giving him extra motivation to light it up this year.

The aforementioned Bibby is still a starting NBA point guard – with a fresh three-year contract, to boot – but his rather pedestrian total of 5.0 assists per game last season should tell you all you need to know about his minimal Fantasy value.

In fact, the 31-year-old Bibby has eclipsed six dimes per game in only two of his last eight full seasons, and didn’t even lead his own team in assists last year. He’s not much of a scoring threat anymore, and may lose minutes this year to Crawford, Johnson and first-round draft pick Teague.

You might be tempted to pull the trigger on Bibby late in your draft, but be aware that his production figures to be mediocre at best, and his upside is just about nil. Still want to bite that apple, Dearie?

Marvin Williams has never lived up to the massive expectations heaped upon him when he was the No. 2 overall pick back in 2005, but the 23-year-old former North Carolina Tarheel had a very nice run in February and mid-March of last season. A back injury all but ended his season at that point, but the 15.2 PPG and 6.6 boards he averaged in March has renewed many Fantasy owners’ interest.

Williams’ upside is limited, but if he can hold his scoring average above 15 PPG he will pay solid dividends on what is likely to be a late-round draft pick or bargain-basement auction bid.

The Hawks grabbed Wake Forest point guard Jeff Teague with the 19th overall pick in this year’s draft, and some Atlanta fans immediately anointed him as the heir apparent to Bibby. While Teague may indeed one day run the point, remember that the Hawks re-signed Bibby to a three-year contract during the offseason, affirming that the job will stay with the veteran for the time being.

Teague is an excellent shooter, but his rather pedestrian 3.5 assists per game his final year at Wake does not inspire confidence. Two things that are impressive are Teague’s 18.8 points per game and 44.1 per cent shooting touch from beyond the arc. He needs to round out his game, but Teague could be a factor in the Hawk rotation as early as later this season.

Keep an eye on how the backcourt situation shakes out. Neither Crawford nor Johnson is a true point guard, but both have the offensive skills to erode Bibby’s minutes – especially if the veteran gets off to a slow start. Crawford has spent more time at the point than Johnson, so he figures to be the prime pilferer of any run Bibby stands to lose. It would be surprising to see Teague getting a lot of PT this season, but the rookie could be a factor next year – especially if the Hawks lose Johnson to free agency.

Centre Al Horford took a nice step forward in his second season, solidly boosting his blocks, assists and points-per-game averages. The block total is most intriguing, as Horford jumped from 0.9 blocks in his rookie year to 1.4 swats per game last season. One gets the feeling that he has not yet reached his ceiling, so astute Fantasy observers will keep close tabs on the 23-year-old big man’s progress this season.

Forward Josh Smith has been one of the NBA’s best shot blockers since he entered the league in 2004, but the 23-year-old missed a dozen games last year due to a sprained ankle he suffered just four games (and 10 blocks) into the season. J-Smoove just wasn’t the same after he returned, and his per-game average of 1.2 blocks last season was well below both his ’07-08 average of 2.8, and his career standard of 2.4 BPG. Smith’s Fantasy value has taken a significant hit this season, but he appears to be fully healthy and there’s reason to believe that he’ll once again be the Swat Monster that so enthralled Fantasy owners during his first four seasons. If he can move back into the 2-plus territory in blocks, while logging his customary eight boards, 16 points and 1.5 steals per game, he could be a Fantasy steal at his current draft ranking.

By Buck Davidson
This entry was posted on Sunday, October 4th, 2009 at 11:49 am and is filed under 2009-10 RotoRob NBA Draft Kit, BASKETBALL, Buck Davidson, Team report. You can follow any responses to this entry through the RSS 2.0 feed. You can skip to the end and leave a response. Pinging is currently not allowed.