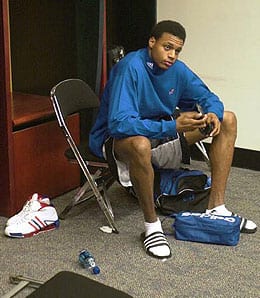 Brandon Rush could surprise a hell of a lot people this season.

We’re back with more of the 2009-10 RotoRob NBA Draft Kit as we delve into the world of sleepers. In this information driven society we live in, are there really any sleepers in Fantasy sports anymore? Back in the day, you had a serious advantage in a draft if you simply did your homework and looked for breakout potential. Nowadays, everyone has that information, by one simple click of the mouse.

What I hope to accomplish here is to just identify some of the guys that could really help your team. I’m talkin’ bout guys that other people may sleep on — whether it is guys who have been injured and are ready to regain their status as league elite, or that former 12th man who will finally get a chance to contribute. My goal for this list is to give you some talent to chew on and hopefully it will allow you to catch your fellow Fantasy mates off guard.

Here are my top 10 guys that will make your buddies envious come December. These are in reverse order of sleepiness, just to build the tension:

10. Brandon Rush, SG, Indiana Pacers: The fact that Rush sits behind Dahntay Jones on the depth chart does not bother me at all. Rush had a decent rookie year and will definitely see more court time this year. D. Jones is an energy guy who does not score with ease, so his impact on the team will be limited. I see Rush being inserted in the game to heat it up from beyond the arc. Also, he will get his fair share of steals and will occasionally get some blocks. I like Rush in his sophomore year to start to contribute on a more consistent basis. I would look to pick him up in the last round or two in a standard 12-team league.

9. Hakim Warrick, PF, Milwaukee Bucks: Warrick falls into the category of guys who will compile stats just because he is on the floor so much. Seriously, the frontcourt in Milwaukee is pretty dreadful. Warrick will be competing with Kurt Thomas, Luc Richard Mbah a Moute, Joe Alexander, Walter Sharpe, Francisco Elson, etc. Sure, there is some experience and talent among those names, but Warrick should have no problem averaging 30 minutes a game. He averaged nearly 12 points, 5 rebounds, 0.5 blocks, and 0.5 steals a game in less than 25 minutes last season, so given a few extra minutes, it stands to reason those numbers will go up accordingly. If Warrick seizes the opportunity, he could step his game up and become a solid Fantasy player.

8. Drew Gooden, C, Dallas Mavericks: I really like the addition of Gooden to the Dallas Mavericks. I expect him to play around 28-to-30 minutes per game while starting at centre. He will play over incumbent Erick Dampier and will eat up minutes formerly consumed by the now exiled Brandon Bass. If Gooden proves his worth early, he could prevent coach Rick Carlisle from running with a small lineup that would include Dirk Nowitzki at centre and Gooden on the bench. I think you can safely pencil in Gooden for 12 points and 8 rebounds a game. He also shoots free throws quite well (84 per cent last year), which is a definite plus from the centre position.

7. Spencer Hawes, C, Sacramento Kings: The third-year centre out of Washington is an intriguing Fantasy player for the upcoming season. At 7’0”, 245 pounds, he is pretty soft and doesn’t get as many rebounds as he should, but he has other dimensions to his game that can help your squad. Last year he averaged 11.4 points, 7.1 rebounds, 1.2 blocks, and 0.5 3-pointers per game. That’s right, a fluffy seven footer hit 40 three pointers last year.  He averaged just under 30 minutes per game last year, and that is sure to rise as he is entering the season as the starter. Hawes competed for playing time much of last year with fellow white guy Brad Miller. Don’t overlook Hawes when it comes to filling in your roster, especially if your team is built to make up his deficiencies on the board. Just please do me a favour and don’t accidentally draft Spencer Pratt.

6. Robin Lopez, C, Phoenix Suns: The exodus of the great Shaq-tus has left a giant void in the desert. The Suns brought in Channing Frye, whom coach Alvin Gentry said is the favourite to start the season on top of the depth charts. This comment does not scare me away from Lopez, who will become a rebound and block machine if he gets court time. He is an offensively challenged player at this point, but he has the size to contribute on the court. I would not mind taking a flier on this big guy, as it could pay dividends if Lopez steps up his game and takes advantage of the opportunity to play.

5. Courtney Lee, SG, New Jersey Nets: See, I am not sure how to classify Lee. I think either people will overvalue him because he was traded (or at least was the key component in the deal) for Vince Carter, or just totally sleep on the fact that he was traded for Vince Carter. I am including him on this sleeper list because I think his average draft position in most leagues will be way too low. Lee is a great defender who I project to finish in the top 10 in steals and finish with over a three pointer made per game. He will score plenty of points and be a great complimentary guard to Devin Harris. I love that backcourt and I think that they will put up some giant numbers this season. Be on C-Lee Watch and if you see reasonable spot to snag him, don’t let the opportunity pass.

4. Jason Thompson, PF, Sacramento Kings: First off, I like Thompson as a Fantasy player more than his teammate Hawes, who is featured on this list as well. Thompson is a second year guy who averaged 11 points, 7.5 rebounds, and nearly 0.75 blocks per game in 28 minutes a contest. This season, he will most likely play around 32-to-35 minutes a game and will see his numbers move upwards. I like Thompson to be a double-double machine this year and hopefully get his blocks per game up to around one. A big problem last year was that the Kings had Thompson guarding small forwards often, which probably fatigued him as he was always running around chasing wings.

3. Louis Williams, PG, Philadelphia 76ers: After playing second fiddle to Andre Miller for a few years, Sweet Lou Williams is ready to assume the role of starting point guard in Sixerland. His stats last season (13 points, 3 assists, 2 rebounds and 1 steal a game) were not very impressive, but you have to realize that he only played 23 minutes a game. Coach Eddie Jordan already came out and said Williams can expect 38 minutes a game. The biggest concern with Williams is his poor shooting percentage, so hopefully that is something he has been working on. If things go according to plan, I could see him averaging 20 points, 5 assists, 3 rebounds, and 1.5 steals per game, which would make him an awesome Fantasy steal. I also expect him to average at least a three pointer made per game, which would make Williams quite the stat stuffer. If you plan on taking him, I would hedge my approach by loading up on big men with high field goal percentages to help offset some potential growing pains.

2. Antonio McDyess, PF, San Antonio Spurs: Laugh now, but once McDyess is averaging a double-double a month or two in the season, you will only feel regret in not snagging this aging vet. McDyess averaged 12 points, 11 rebounds and 1.6 blocks a game in the second half last season with the Pistons. He was signed by the Spurs to be their starting power forward and team up with future HOFer Tim Duncan. The Spurs drafted DeJuan Blair and signed Theo Ratliff, but McDyess was the one brought in to eat up the minutes left by the departure of Fabricio Oberto, Thomas and Gooden. If McDyess holds up health wise, you could have yourself a solid Fantasy contributor, especially in rebounds and blocks.

1. Gilbert Arenas, PG, Washington Wizards: Yes, two years ago he was considered a top 10, even top five player, and now he is on a sleeper list? How is this possible? Well, people are sleeping on Agent Zero’s ability to regain his crown as the prince of Washington D.C. He is not doing a ton of talking, he stopped blogging, and he is back to his gym-rat self. The biggest change in this offseason compared to the past is that he teamed up with legendary trainer Tim Grover to totally rebuild the strength in his injured knee. Arenas is supposedly back to form and as explosive as ever. He’s a sleeper because many people will not touch him in the first two rounds. I am declaring him a top 15 Fantasy player this season. He is somewhat a risky second round pick, but I think he could perform like a first rounder this season. Don’t sleep on the drive Arenas has and the work he puts in to constantly make his game better. In 2006-07, his last full year, he averaged 28 points, 6 assists, 3.5 rebounds, 2 steals, and 2.5 three pointers a game, all while maintaining a great free throw percentage and respectable field goal percentage. These are the numbers I expect from Arenas this season, and his draft position will not correspond to those numbers. I, for one, won’t be sleeping on Gilbert.

By Alex Hardin
This entry was posted on Saturday, October 3rd, 2009 at 1:58 pm and is filed under 2009-10 RotoRob NBA Draft Kit, Alex Hardin, BASKETBALL, Sleepers. You can follow any responses to this entry through the RSS 2.0 feed. Responses are currently closed, but you can trackback from your own site.