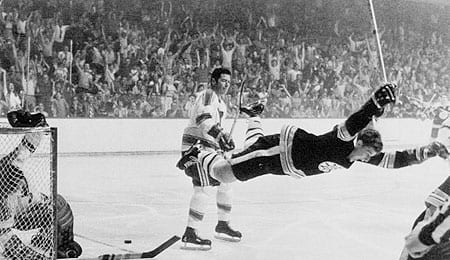 While there may never be another Bobby Orr, Mike Green comes the closest in today’s NHL.

This week’s Roundtable question was designed to challenge conventional wisdom. Is there room for whimsy in Fantasy hockey? I sought to find out by asking the following to this week’s panel: Who do you predict will be the top three scorers this season and the highest scoring defenseman (overall points)?

This is the easiest question that I have answered from the roundtable so far. The consensus top three picks in just about every type of Fantasy league should be Alex Ovechkin, Evgeni Malkin and Sidney Crosby. Barring injury (and Crosby is currently battling a nagging groin injury), there is no reason to think that last season’s top three scorers won’t be this year’s top three scorers again. Other elite scorers like Pavel Datsyuk, Ilya Kovalchuk or Ryan Getzlaf could challenge, but I won’t go out on a limb in making my prediction.

The same goes for last season’s top-scoring defenseman, Mike Green. Although his defensive shortcomings during the playoffs were well-documented, Green is in a class of his own as far as scoring goes. It’s rare to see a defenseman crack the 30-goal or 70-point mark unless their name is Bobby Orr or Paul Coffey, which is why one could justify drafting Green in the first round. Other top-scoring defensemen like Nicklas Lidstrom, Scott Niedermayer and Sergei Gonchar won’t add to their point totals given the stage of their careers, but we may not have seen Green’s best years yet.

Like many hockey observers, I think that Alex Ovechkin, Evgeni Malkin and Sidney Crosby (in that order) will lead the league in points this year. And that consistency is reflected in the Yahoo! Fantasy hockey drafting so far.

But as far as the next three are concerned, there is less agreement. Joe Thornton is a name that has often been associated with the top scorers’ list, but this year his appeal seems to be waning, perhaps due to continued lackluster playoff performances.

Instead, folks seem to be looking at Ryan Getzlaf, Ilya Kovalchuk, and Zach Parise as the number four, five and six scorers.

Of those three, I’d be most wary of Parise. While he’s clearly developed into an elite scorer, it’s unclear how the coaching change in New Jersey will affect Parise and the Devils. Jacques Lemaire is notorious for his defensive style of play. Scoring may take a dip as a result.

For defensemen, I like Mike Green as the top-scoring blueliner. Most other would agree I think.

Again, asking the question of who’s next after Green is perhaps more useful to readers looking for an edge this year.

I like Dion Phaneuf as the next leading defensive scorer. Mike Keenan was not good for the Flames, and I believe that the coaching change will be well received in Calgary. After a significant dip in his numbers last season, I think Phaneuf is hungry for a comeback year, especially with the extra incentive of the impending Olympic team selections.

The general consensus in Fantasy hockey going into this season is Malkin, Ovechkin and Crosby are by far the three top forwards to own in any points league and the same can be said about Green at the D position.

So let’s take a look at four through six, where things are a bit tougher to gauge.

4. Joe Thornton: It wasn’t long ago (2006-07) where Big Joe put up 114 points, second only to Crosby. JT is known for being a one-dimensional player, but in a points-only league where goals and assists are equally weighted I’ll take 90 assists and 10 goals over 60 goals and 20 assists 100 per cent of the time. JT has seen his value drop after a disappointing 86 points last season, but let’s not forget he has averaged 97 points the last four seasons, which is highest average not including the big three. This was all accomplished without an elite winger; factor in the addition of Dany Heatley and you have an easy pick.

5. Ilya Kovalchuk: Scoring 91 points playing with Todd White/Rich Peverly as your centre is quite the feat. This year, Kovalchuk will have Nik Antropov, who — when healthy — is not the best option, but an upgrade nonetheless. Kovalchuk is in a contract year and will most likely be the top UFA next season. Look for him to put up big numbers as he tries to secure a long-term deal.

6. Ryan Getzlaf: A steady progression of 39, 58, 82 and 91 points over his first four years makes Getzlaf a great candidate to hit 95+ this season. The line of Corey Perry-Getzlaf-Bobby Ryan clicked well last year and with a full season of Ryan on the top line, the chemistry should continue. Finding a player who can break the 90-point mark is rare and, at such a young age, Getzlaf has many more successful seasons ahead of him.

Green has a chance to hit the 80-point mark if he doesn’t get injured. After Green, the next best defenceman will be in the 60-point range.

Andrei Markov is the popular choice here, but with a defensive coach and a lot of turnover on their roster, it will take time for the Canadiens to find chemistry and thus I expect a drop in Markov’s points. [Editor’s note: After this was submitted, Markov tore a tendon on opening night, requiring surgery and sidelining him for up to four months.]

Mark Streit: He’s not a popular pick, but the Swiss Captain put up 56 points in 74 games last season on a horrible team. I was under the belief last season that he would not be Fantasy worthy after leaving Montreal, but he proved me wrong. Streit will have John Tavares and hopefully a healthy Kyle Okposo to help improve on his numbers, so 60 points is within reach.

I think I speak for all of us here at RotoRob when I say we love Fantasy hockey because it’s like degenerate gambling, but without the financial implications. It’s not hard to draft based on rankings, but if you want to win your league, you need to take risks. Not that any of my picks are going to be available in your leagues. I just want everyone to make themselves open to the possibility of risk. It’s how I sold financial products for AIG and it’s how I play Fantasy hockey.

Defenseman: Forget Mike Green. Do you know what number he wears? It’s number bullseye. As in, he has a giant bullseye on his back and all anyone cares about is shutting him down. You saw it in the playoffs and you’ll see it this season. Teams know they can’t stop Alex Ovechkin, so they’ll focus on Green, whom they can stop. My top scoring defenseman? The underappreciated Mark Streit. He’ll have some more scoring options this season and solid goaltending, which the Islanders should have, will make a world of difference. Streit actually had to focus on defense last season. I think he’ll have a permanent green light in the offensive zone this season.

By Steven Ovadia
This entry was posted on Saturday, October 3rd, 2009 at 6:08 pm and is filed under HOCKEY, Roundtable, Steven Ovadia. You can follow any responses to this entry through the RSS 2.0 feed. You can skip to the end and leave a response. Pinging is currently not allowed.