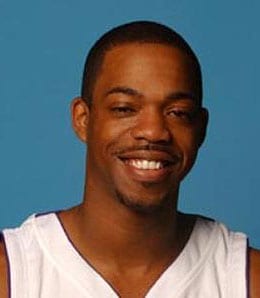 Rafer Alston is no longer smiling now that he’s landed in the Swamp.

The 2009-10 RotoRob NBA Draft Kit continues today with yet another team preview — we’re now halfway through these puppies! And while you’re wondering just where the hell Delonte West is, let’s take a closer look at the New Jersey Nets, a team that could very well hit rock bottom this season.

The 2008-09 New Jersey Nets finished with the exact same amount of wins as they did the previous season, despite an improved offense and slightly better defense. This year, however, having traded their only remaining bona fide star – Vince Carter – to clear cap space for next summer’s free agent bonanza, the Nets may be in for a very long season, unless several young players take monumental leaps forward.

Something needs to give there, because as things stand, long-time starter Skip to my Lou Alston will be coming off the bench, and his summer-long attitude of “I’m just glad to help a young team rebound,” has suddenly morphed into “trade me the fuck out of this swamp now.” Dealing Alston will break up what could have been one of the league’s best PG combos as, playing behind Harris, Alston would have given the team its first true back-up PG in quite some time. But if the Nets can find a taker for Alston and his expiring contact (he wants to go to Miami or New York, both of which could use backcourt help), perhaps they can address their biggest weakness: frontcourt depth.

Starting centre Brook Lopez is coming off a superb rookie season and figures to get even better this year as the team employs him as more of a post player, but at the three and four, the Nets have nothing but question marks. Bobby Simmons is currently slated to start at SF, and he’s never been the same since a serious ankle injury cost him the entire 2006-07 season. He’s a solid perimeter player, but is he capable of handling starter minutes? Jarvis Hayes could factor in here more than you’d like, but neither of these players is what anyone would call an ideal solution.

At the four, Yi Jianlian is still waiting to deliver on his promise, but most reports from this summer are quite favourable. And bear in mind that he won’t turn 22 until next month, so he may still be a serious force. But if he can’t take a big step forward, the Nets don’t have many palatable options behind him, although we can’t completely overlook what a healthy Josh Boone could be capable of.

The trading of VC also signals a new era in Jersey – the time of Devin Harris. This is undeniably his team now, and how capable he is of becoming a true leader is a question that needs answering. That, and the ability of young players like CDR, Yi, T-Will, Lee and Lopez to make major strides this year will go a long way towards determining if this team has any chance whatsoever of approaching last year’s modest win total (34).

The fact that coach Lawrence Frank was retained after two straight poor seasons surprised many. You better believe he’ll be on a short leash this year, and for those of you who like to bet on such things, he’s a great candidate to have the dubious honour of being the first coach fired this season.

Unfortunately, swampland people, all signs point to this being a “take one for the future kind of season.” The good news is that the team has plenty of expiring contracts that will provide it with a ton of cap space heading into the highly-anticipated 2010 free agent period. Expect the Nets to be players in the LeBron James sweepstakes, although the likelihood of them actually luring the King to Jersey is about as great as the team’s chances this year to avoid a third straight season of missing the postseason. This is going to be one of the worst teams in the NBA this season, but on the plus side, that will increase their chances of landing a top young forward like UNC’s Ed Davis or Lithuanian Donatas Motiejunas in next summer’s draft.

And despite the endless questions facing the Nets’ on-court product this season, there still remains the outstanding off-court issues to iron out, namely the ownership bid made by Russian billionaire (those are two words you’ve probably never seen combined before) Mikhael Prokhorov. This is far from a done deal at this point, and the future of a franchise that has reportedly lost US$136.6 million over the past two years hinges on this decision.

Hayes could easily wind up as the starting SF over Simmons, but neither of them should be on your draft list. Whoever winds up gaining the advantage here might emerge as a decent waiver wire pick, but Simmons’ days as a useful Fantasy option are in the past, while Hayes has never really been of much use. I’m also curious to see how much PT Williams can steal from Lee at the two. Each of these players is a potential impact guard – Lee as a big-time scorer, and Williams as an across-the-board contributor (although his FT shooting needs improvement).

Harris immediately became a major part of the Jersey offense since arriving in the Swamp, and now that VC is gone, he’ll be asked to do even more. It wouldn’t shock me if he again struggles with his FG percentage and has plenty of “volume scoring” nights, but the points and dimes will definitely be there. And if he can ever develop a more potent perimeter game, look out. Harris has reportedly put on weight this offseason, and hopefully that will help him stay healthy given the amount of minutes he’s going to be asked to log.

Alston is currently third on the Net depth chart at PG, so if you thought he saw less PT down the stretch in Orlando than he did in Houston, you ain’t seen nothing yet. Until he gets moved somewhere where he’ll see at least 25 MPG, Alston is going to have a real tough time being Fantasy-relevant.

Jianlian is going to be given every opportunity – mostly for lack of better options – to prove he deserved to go sixth overall in the 2007 draft. He’s definitely shown plenty of flashes of stardom, but he’s struggled badly with inconsistency, and that’s been really hard to swallow for Fantasy owners. The team plans to increase his involvement in the offense this year, deploying him as a post presence – something that should see his FG percentage, scoring and rebounding all head north.

I’m also expecting a massive leap forward from Lee this season. He could be the second or third scoring option, so look for 15 PPG, a couple of treys per game and some nice steal totals.

All eyes will be on T-Will, who wowed so many people with his summer exploits. He certainly doesn’t lack confidence, recently posting an image on Twitter showing him as Rookie of the Year. An extraordinarily athletic two-guard, Williams has an excellent understanding of the game, so don’t count him out as a legitimate Fantasy option this season – especially if the Nets are successful in sending Alston elsewhere.

When or if Alston gets dealt, how do the rest of the backcourt minutes in Jersey get dispersed? Is Yi ready to be a legitimate NBA force on a consistent basis? Can Harris handle being The Man? Given a larger role, will Lee step forward offensively and take pressure of his backcourt mate?

By RotoRob
This entry was posted on Thursday, October 1st, 2009 at 12:43 pm and is filed under 2009-10 RotoRob NBA Draft Kit, BASKETBALL, RotoRob, Team report. You can follow any responses to this entry through the RSS 2.0 feed. You can leave a response, or trackback from your own site.