Russia: The New Land of the Free for Hockey Players? 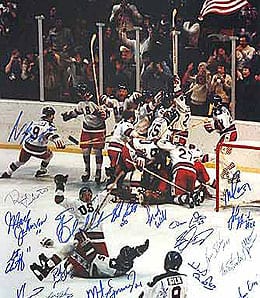 The hockey landscape — politically and economically — sure has changed since the Americans pulled off the Miracle on Ice.

The year was 1980 and the United States had just beaten the Soviet Union to win the Olympic gold medal in one of the biggest upsets in sports history. All hockey fans know the story. The underdog group of young Americans managed to beat the powerful, skilled and experienced Soviets, thought to be a team destined to win gold.

This was also the year that free-market capitalist Ronald Reagan was elected President of the United States. Throughout the ‘80s, Reagan worked to set the United States on course to some of the most prolific years in that nation’s history through tax cuts and an overall reduction in the size and control of government. In sharp contrast, the ‘80s were dark years in Russia’s history. The Soviet Union, as it was then known, faced a stagnant economy and steep unemployment, leading the near bankrupt government to raise tax rates in an attempt to keep itself afloat, only to collapse in 1991.

Throughout that time, the NHL was experiencing a European invasion of young, fresh, highly-skilled, motivated players. The athletes came to the North America from the Soviet Union, Czech Republic, Germany, and other European nations to not only play hockey in the most notable league in the world, but in many situations, to avoid oppression from their governments, to safely make a living for their families, and exploit their God-given talents.

Now, just 30 years later, a role-reversal is beginning to occur. Talent is beginning to leave North America, finding home in a league operated under a government that once drove players from their own nation to North America’s premier hockey league, the NHL. A new Russian-based hockey league, the Kontinental Hockey League (KHL), was created in the post-Soviet Union nations in the fall of 2008. The league has attracted some fine talent, including youngsters trying to break into the NHL as well as former stars trying to regain some of their past glory. But this is not the only caliber of player moving to Russia to play in the KHL.

Some of the world’s top Russian talent has been leaving the NHL to play in the KHL, despite having potentially many years left to play in the NHL. These players include Sergei Fedorov, Sergei Zubov, Dmitri Kalinin, Viktor Kozlov and Alexei Zhitnik. However, these departures are not surprising to most because of the opportunity for Russian players to return to their own nations to earn similar salaries that they could have abroad.

What could have drawn such a big number of high caliber former NHL players from around the world to a newly established league? It’s especially puzzling considering the number of players complaining of poor playing conditions and traveling arrangements, difficulty adjusting to a new Russian culture and language, and rumours of payment problems on top of requirements that Russian teams have a maximum of five non-Russian players. Why would any player suffer through conditions in the KHL when the hallowed NHL still has room for players like Jagr and Fedorov? The answer, of course, is money.

Many former NHL players are transferring to the KHL for lucrative, big dollar contracts, bringing instant recognition and publicity to the new league. Many NHL supporters are not concerned about this sudden drain, believing that the problem will balance itself out. They feel that such a young league can not continue to outspend a better established, better organized, higher quality, and better marketed league.

The thought is that the KHL will either go bankrupt, or will have to choose between a rock and a hard place: either spending all of their money on a few high caliber players or spending their money prudently by creating a more balanced team, made up of players that can’t make the NHL. These are all good points, but the overarching problem is not that simple.

A major factor that NHL supporters who dismiss this seemingly temporary shift in the tide have been neglecting is the government and its role in the United States. The Russian government has learned many valuable economic lessons from the fall of the Soviet Union, including the need to maintain low tax rates in order to promote long-term economic growth.

In response to the same set of events, the United States government has slowly made our nation less competitive in the global marketplace by maintaining high business and individual tax rates, in turn dramatically affecting all parts of the economy, now including the NHL and its stars.

Further, states like New York and California charge another 10 per cent on top of the federal rate, with even some cities (like New York City) having even more income taxes.

In contrast, after Russia’s 2001 Tax Reform, the Federal Income Tax Rate for 2009 is 13 per cent for an individual that is a Russian resident. That’s an across the board, flat tax rate, no matter how much you make. Non-resident Russians are taxed at a Federal Income Tax Rate of 30 per cent, still lower than the top American tax burden.

The difference between the two tax rates is astonishing when applied to hockey players’ salaries. Jagr is reportedly making US$10 million annually in the KHL. After taxes, he will be charged US$1.3 million dollars annually in tax. If playing in the NHL under the same salary, Jagr would be charged at least an additional US$1.7 million in tax, plus possible additional income taxes from his state and/or city.

Where would you play? Could you deal with a slightly less luxurious locker room or hotel room over the course of a season for at least an additional US$1.7 million dollars? The reality is that many NHL players, all of whom have limited careers, would take the tradeoff to make the jump to the KHL.

You are likely used to seeing franchises deal with tax implications by doing things like shopping around for the best location for their stadiums based on tax breaks and the like. Unfortunately, the tax burden on players is a heavy one that isn’t possible to avoid. A new factor in top hockey players’ decision-matrix about to where to play is now what the nations’ tax policies are and how they will affect their income.

As for the leagues themselves, although the NHL is not to be operated for profit, it is subject to the United States Federal Corporate Tax Rate of 35 per cent, lowered to that rate by Reagan in the ‘80s and unchanged since, despite nations around the world seeing the advantages of low corporate tax rates.

On top of the federal rate, the NHL, LP is registered in my home state, New York, a state which since 1977 has had the dubious distinction of having the highest or second highest state/local corporate tax burden in the nation. While in sharp contrast, the KHL is subject to the standard Russian Corporate Profit Tax in 2009 of 20 per cent and local tax rates based on property ownership. Companies also may pay a 9 per cent tax on dividend income.

Over the years, Americans have been getting used to seeing the best players in the world and with good reason, as we pay a high premium for our entertainment. But seeing the best players in the world play hockey is an even higher priority for Russians. As the Russian economy continues to grow and high tax rates continue to put the NHL and its teams at a competitive disadvantage, NHL players will continue to realize a greater draw to play in the KHL.

As a result, National Hockey League fans are in jeopardy of losing the best players in the world to leagues that can better compete in the global marketplace for players because of their nations’ lower tax rates.

So yes, politics is now involved in every aspect of our lives, but if you care about the NHL or your franchise, you’ll begin to get involved in politics to work to keep the top players here in the NHL. The same problem will also occur in other sports, as various leagues around the world begin to take advantage of their built-in government benefit of a hospitable money-making climate for businesses and individuals.

As the world continues to “shrink,” it becomes more and more essential to maintain low income tax rates to attract the best talent. If the government fails to make significant changes, the departure of top quality players from the NHL will continue to happen until none are left.

By RotoRob
Tags: Russia
This entry was posted on Wednesday, September 16th, 2009 at 12:32 pm and is filed under HOCKEY, RotoRob correspondent report. You can follow any responses to this entry through the RSS 2.0 feed. Both comments and pings are currently closed.