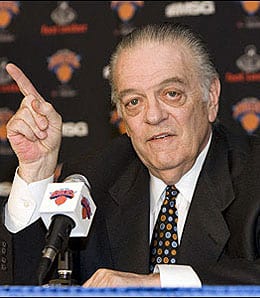 Is Donnie Walsh pointing to the only direction the Knicks have to go or what pick they’re gunning for in next year’s draft?

The 2009-10 RotoRob NBA Draft Kit rages on with yet another team preview.

The Knicks were bad last season. They were trainwreck bad. They were so awful and so ill-conceived, that I would watch games just for the sheer comedy of it all. What’s not to love about a slow, plodding team with no shooters playing an uptempo offense and very little defense?

Still, everyone had big dreams for the Knicks in the offseason. The thought was that there was some talent available that would improve the team while keeping them under the cap for 2010 cap, the season that the Knicks can make a serious run at LeBron James, if he’s available.

But the Knicks couldn’t find a way to upgrade while maintaining their cap space. So they basically did nothing and are hoping some existing players decide to step up. You have to love that kind of optimism. In fact, you can’t help but picture Knick President Donnie Walsh in the ocean, surrounded by sharks, saying ‘Don’t worry. I’m sure they’re not here to eat me. They probably just want to rescue me and maybe loan me some money.’

The Knicks are startling thin in the backcourt, especially given how important guards are in coach Mike D’Antoni’s system. The only battle will be between Duhon and exhaustion.

One of the big forward battles will occur off the court; can the Knicks get Lee signed before training camp? Lee, a restricted free agent, has refused to sign anything, even as every other NBA team has shown no interest in the double-double man who has zero impact on the game.

Gallinari, coming off back surgery, will fight for a starting spot, and could push Chandler into a guard spot.

Knicks fans want to believe the newly healthy Curry will be able to move up and down the court without getting winded, but if he can’t, Milicic could step in, looking, as always, to erase the dud reputation that follows him like a bad smell.

Chandler finished last season very strong and seems to be improving very quickly. That’s saying something, given he’s come up in the volatile Knick organization. Entering his third NBA season, Chandler is getting bigger, smarter and better. He’s one of the few genuine bright spots in blue and orange.

Nate Robinson, like Lee an unsigned restricted free agent, will get a one-year deal from the Knicks, but the team seems pretty done with him. He picks up technicals on the court. Off the court, this summer he was arrested for driving without a license. There’s just nothing about Robinson that guys like D’Antoni or Walsh like.

Expect Duhon to once again wilt under a massive workload. He’s a fine point guard, but he’s not a starter. And he’s not a starter in a system with no backups. Duhon will be crushed unless someone helps out or the Knicks figure out a way to bring in help.

If Gallinari is healthy, this could be the season he shows the NBA what he’s capable of. He’s got moves and he’s got grit. Gallinari is a huge Fantasy risk, but on a team devoid of talent, a guy like him can really put up numbers.

The Knicks have always done better with lower, throwaway picks than with high ones. Having said that, Hill, the eighth pick overall, is a big man who shoots well, something that D’Antoni is a fan of. If Curry and Milicic don’t pan out, it’s not inconceivable to imagine Hill as an undersized centre.

The big, immediate Fantasy story will be if the Knicks can get Lee and his double-double self signed. Lee isn’t good for much help for a team, but you have to love his numbers in a Fantasy league.

Curry will also be worth watching. Last year was an embarrassment and he could be looking to show everyone up. He came to Summer League in incredible shape. Let’s see if he can maintain that into the start of the season.

By Steven Ovadia
This entry was posted on Tuesday, September 15th, 2009 at 12:20 pm and is filed under 2009-10 RotoRob NBA Draft Kit, BASKETBALL, Steven Ovadia, Team report. You can follow any responses to this entry through the RSS 2.0 feed. You can leave a response, or trackback from your own site.