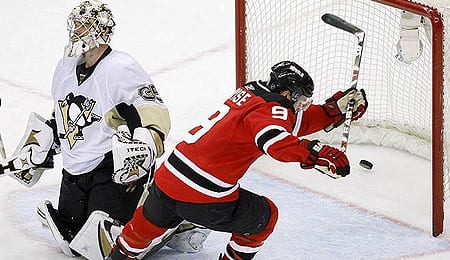 Can Zach Parise build on his huge season, or will Jacques Lemaire’s system bring him back to earth?

We’re back with more of the 2009-10 RotoRob NHL Draft Kit with the release of another cheat sheet. Here are the top 20 left wingers in Fantasy hockey.

When it comes to left wing, you’ll find that depth usually disappears after the top 10 guys or so. To make things even more difficult, different forwards are listed in different positions based on the Fantasy site you’re using. In some cases, sites will list them as two positions, thus allowing you to be more flexible with your games played.

In our case, this list is using the positions listed on Yahoo! Fantasy Hockey and is compiled based on stats, age, team, and other trends.

Ranking from last season are in parenthesis. Note that Patrick Marleau (also listed in our Centre Rankings) may play left wing or centre this season and is eligible for both in some leagues (he was last year in Yahoo!).

1. Alexander Ovechkin, Washington Capitals (1): I should have made him No. 2 just to see what sort of reaction I’d get. This doesn’t need any explanation, does it?

2. Ilya Kovalchuk, Atlanta Thrashers (3): Two words — contract year. Just starting the physical prime of his career, Kovalchuk has the opportunity to show the world that he’s worth big, big money. The Thrasher star will probably mix and match linemates again, but the early indication is that he’ll be playing with Nik Antropov. Here’s a better indicator: it took the Thrashers about half the season to figure out John Anderson’s system, and Kovalchuk scored more goals in the second half than the first.

3. Zach Parise, New Jersey Devils (NR): Parise’s just entering the prime of his career. With that in mind, look at his goal totals since his rookie year — 14, 31, 32, 45. Will he hit the mid 40s again this year? There’s no reason why not, and if your league counts shots on goal, you’ll love Parise. He increased his shot total by around 100 last year, and since his shooting percentage remained the same, his goal total spiked. Yeah, I think he figured it out…but the biggest concern is how his offensive instincts will be muted under Jacques Lemaire.

4. Rick Nash, Columbus Blue Jackets (6): People are going to point to Nash’s relatively low assist factor as a detriment, but let’s see how the Columbus captain does with a full year of Derrick Brassard at centre. Also, while Nash’s shots on goal dropped last year (his shooting percentage went way up, though), he’s become a shorthanded threat ever since Ken Hitchcock challenged him to become a penalty killer.

5. Thomas Vanek, Buffalo Sabres (9): Remember when we all scoffed at the ginormous offer sheet Kevin Lowe gave Vanek? All he does is score goals, especially on the power play where he got 20 of his 40. The Sabres are offensively challenged outside of Vanek (and hope that Jason Pominville or Derek Roy stay consistent), which explains the assist total. If the Sabres’ young core takes a collective step forward, Vanek’s overall totals should go up.

6. Dany Heatley, San Jose Sharks (4): Love him or hate him (and mostly everyone hates him right now), you can’t deny the fact that Heatley’s a lock for 35 goals with an upside of 50+ goals. It’s more likely he’ll be on the upper part of that with Joe Thornton passing him the puck, but we’ll see if there’s any lingering fallout from Heatley’s summer of discontent.

7. Brenden Morrow, Dallas Stars (NR): Assuming Morrow is totally recovered from surgery, he’s a virtual lock for 30 goals, 70 points and 100 PIMs. You can’t really go wrong with that, though the other question is how Morrow will perform under Marc Crawford’s new system.

8. Patrick Marleau, San Jose Sharks (NR): Injuries marred a great season from Marleau, but it remains to be seen how he’ll react to having his captaincy stripped. The last time a coach threw him under the bus, he had one of his worst seasons ever. His relationship with Todd McLellan seems to be much better, and he’s matured as a player, so don’t look for too much of a dip from Marleau even as he plays with Ryane Clowe and Joe Pavelski on the second line (both guys with potential for 60-70 points). Bonus points here for his shorthanded presence.

9. Daniel Sedin, Vancouver Canucks (5): In the past four years, Daniel (you know, the better looking one) saw his point totals go from 71 to 84 to 74 and then 82. That would make this year’s projection to be about 76, wouldn’t it? The Canucks have a stronger, more offensively-oriented blueline, which should help Sedin’s power play totals. His power play numbers actually dropped last year despite his points going up, so if those can go back to previous levels, you’ll see his totals go even further.

10. Alex Tanguay, Tampa Bay Lightning (10): There’s plenty of reason to be healthily skeptical of a Tanguay resurgence, but here are two reasons why he should have a great year — Vincent Lecavalier and Martin St. Louis. Already dubbed the Next French Connection by Tampa fans, it remains to be seen how the trio will mesh. However, St. Louis and Lecavalier (now healthy after a mediocre season affected by shoulder surgery) are already dynamic as it is; adding a third skilled player should push them even further.

11. Scott Hartnell, Philadelphia Flyers (NR): Move Hartnell up a few spots if your league rewards PIMs. Though Hartnell will never be in the top 10 in scoring, he offers a pretty unique combination of toughness (100+ PIMs), scoring (30 goals), and special teams (both power play and penalty killing). And that hair…really, can we argue with that?

12. Simon Gagne, Philadelphia Flyers (NR): Based on pure skill, Gagne shouldn’t be lower than teammate Hartnell. Call me a cynic, but the fact that Gagne hurt his hip and groin (two injuries that usually linger all season) at Olympic orientation tells me that he won’t play a complete season. I expect total numbers similar to Hartnell’s (around 65 points), but without the PIMs or the number of games played, which also lowers shots on goal.

13. Alexander Frolov, Los Angeles Kings (8): Will this be the year for the LA Kings to break through with their young core? I hope so, because I’m really tired of asking that question every year. Frolov’s point totals have dropped in the past three years (71, 67, 59) — but the drop was much more noticable in his assists. Teammate Anze Kopitar’s numbers also dropped last season, but both should progress forward together, and that should take Frolov’s assists back up.

14. Patrik Elias, New Jersey Devils (15): After two bad years, Elias returned to point-per-game form. However, I suspect that having Lemaire in the fold will deflate Elias’s point totals, but having said that, there’s no real indicator about their history together, as Elias was in the early stages of his career during Lemaire’s first tenure.

15. Ray Whitney, Carolina Hurricanes (11): At some point, Whitney has to slow down. Seriously. The dude is a few years shy of 40 and yet he remains close to the point-per-game range. But the bulk of these are assists, and Whitney’s primary trigger-man, Eric Staal, should match his 40-goal output from last year.

16. Mike Cammalleri, Montreal Canadiens (NR): I’m not totally sold on Cammalleri as a consistent 80-point guy. He usually gets around half of his points on the power play, and it remains to be seen how the revamped Montreal attack will gel. The only real certainty on the Montreal power play is blueliner Andrei Markov. The rest of it reminds me of Glen Sather’s cut-and-paste approach to assembling a lineup, which will make for an interesting chemistry experiment. I’m sure the Montreal media won’t be critical at all.

17. David Booth, Florida Panthers (NR): In his third full NHL season, Booth broke the 30-goal mark. With the ghost of Olli Jokinen gone from South Florida, all eyes are on Booth to be the Panthers’ go-to guy. Peter DeBoer has already stated that he’ll be looking at playing Booth with Stephen Weiss (61 points in 78 games) and Nathan Horton (45 points in 67 games); together, the trio should be able to elevate each others’ games.

18. Loui Eriksson, Dallas Stars (NR): Eriksson’s rapid emergence is reminiscent of Detroit’s Johan Franzen. With key Dallas forwards back in the lineup (Morrow and Brad Richards), Eriksson should see his numbers bump up. While his goal upside should be around 45, the bigger increase will be in his assist totals should his teammates stay healthy.

19. Paul Kariya, St. Louis Blues (NR): Most people will forget about Kariya after his injury-riddled 2008-09 season (only 11 games played — but 15 points). Kariya claims that both of his hips are healthy, and if that’s the case, it’s a safe bet that he’ll put up at least 65 points with an upside of 80. Look for most of those to be assists, though.

20. Milan Lucic, Boston Bruins (NR): In his third year, Lucic should eclipse the 20-goal and 50-point marks while still keeping up 100+ PIMs. The potential for a bigger breakout looks to be 30 goals, 65 points. That might be a bit high as power forwards tend to evolve a little slower than pure scorers, but look for Lucic’s power play totals and shots on goal to increase this season too.

By Mike Chen
Tags: 2009-10 NHL Draft Kit
This entry was posted on Monday, September 14th, 2009 at 3:58 pm and is filed under 2009-10 RotoRob NHL Draft Kit, Cheat sheets, HOCKEY, Mike Chen. You can follow any responses to this entry through the RSS 2.0 feed. Both comments and pings are currently closed.