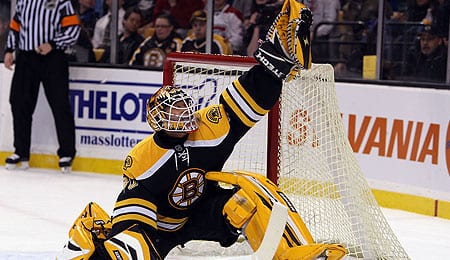 Tim Thomas may not be the third goalie taken in your draft, but he deserves to be.

Here are your top 20 Fantasy goalies. Any debate means I have done my job. Enjoy.

Last season’s rankings are in parenthesis.

1. Roberto Luongo, Vancouver Canucks (5): Luongo, over a 70-starts or more season, just produces more points in leagues where wins and shutouts are essential. In his last two full years, he produced a 2.31 GAA and a .920 save percentage with 11 shutouts and 82 wins. Then, in just 54 starts last year, he had nine shutouts and 33 wins. Project those numbers over a 72-start season and you have 44 wins and 12 shutouts…that is nasty! This season, Luongo may not quite get 12 shutouts. I am thinking somewhere in the neighborhood of 10 shutouts and 44 wins with a 2.29 GAA and a .923 save percentage. He is going to be pretty well automatic this year as far as Fantasy goalies.

2. Martin Brodeur, New Jersey Devils (2): I don’t know…16 shutouts, 92 wins, and a 2.17 GAA to go along with a .921 save percentage is just too good to pass up in Fantasy leagues. Brodeur usually gets drafted as the No. 1 goalie based on reputation alone. Even at 37, he is still that good, when most goalies are slowing down. I have a feeling that last year left a sour taste in his mouth, so expect Brodeur to be nominated for the Vezina Trophy once again. His numbers will be around 41-43 wins, a 2.35 GAA and a .921 save percentage. Toss in eight or nine shutouts and people will forget all about that nightmare that was the 2008-2009 season.

3. Tim Thomas, Boston Bruins (NR): Thomas is a very solid goalie that can be downright brilliant and is not afraid to take a leadership role on the ice. Sure, he is 35, but that Boston defense is just about tops in the league even without a guy like Steve Montador. The numbers do not lie: last year, Thomas put up a 2.10 GAA, .933 save percentage and five shutouts along with 36 wins. Even if he gets 10-12 more starts which is almost certain, the numbers will still be up there. The bottom line is Thomas will not be the third goalie taken in most Fantasy drafts, but he should be. I’m expecting these kinds of numbers from the Flint, Michigan native: 40-42 wins with a 2.24 GAA and a .923 save percentage. Add in five or six shutouts for good measure.

4. Niklas Backstrom, Minnesota Wild (11): His numbers will suit him well in whatever system he plays. Still in his early 30s, Backstrom has — get this — room for improvement still. That’s a scary thought for all teams that face him this year. However, it might be bad news that he did get a shiny new contract that he will have to play up to, but not many foresee that as a major problem. Backstrom may actually get a few more wins with a slight uptick in offense. Interestingly enough, the signing of Greg Zanon (from Nashville) may help Backstrom have a better season than 2008-09. This season, I am expecting a 2.27 GAA and a .924 save percentage from Backstrom. He may even get nominated for the Vezina again when all is said and done.

5. Miikka Kiprusoff, Calgary Flames (7): We kind of expect Kipper to start off a bit slow again, but not with the outrageous GAA. As the team gels in Calgary, he will get on a roll. Then. look out from there! What can be expected this year? Well, about 43-45 wins, a 2.45 GAA and a .918 save percentage with at least six or seven shutouts. Yes, they do look a lot like his numbers from three years ago, but I think Brent Sutter brings in a defensive accountability and faith in his netminder that Mike Keenan clearly did not have.

6. Henrik Lundqvist, New York Rangers (4): Winning at least 30 games in each of your first four seasons will get you more than noticed. Lundqvist is also on the cover of…oh, never mind no one cares about that. The bottom line is he is solid in net and behind a team that kills penalties very well and plays close to the vest, so expect that 2.43 GAA to come back down a hair this year. Likely, Lundqvist will have more than three shutouts as well (he did go 35 straight games without one during the ’08-09 season). It’s tough to predict this sort of thing because of the team he plays in front of, but expect Lundqvist to have at least 35 wins and probably close to 40. I’m going to say 39 wins with a 2.35 GAA and a .919 save percentage. Throw in seven or eight shutouts and you can see why it was tough to place him as low as No. 6 on this illustrious list.

7. Evgeni Nabokov, San Jose Sharks (1): He wins, and that’s bottom line — 41 in total last year with some pretty good numbers along the way. Some will say that Nabokov benefits greatly from goal support that is second to very few, if any. Since the lockout, he has been kind of up and down, so expect a little more of an up year from the 34-year-old Russian, who, let’s face it, is playing for some serious coin this year. Here is the deal: Nabokov will win at least 40 games and probably closer to 45 if he stays healthy. If you can put up with the relatively low save percentage compared to almost all of this list, he is a great second starting goalie. I’m expecting a GAA of around 2.35 and a save percentage of about .912 with seven or eight shutouts from Nabokov.

8. Cam Ward, Carolina Hurricanes (15): Carolina is a team on the rise and the appearance in last year’s Conference Finals may be a sign of things to come. This could be the year that Ward breaks the 40-win plateau at last; a 40-42 win season is what we are calling for. He will have around a 2.40 to 2.45 GAA and close to a .920 save percentage with six or seven shutouts thrown in. A solid backup in Michael Leighton will give Ward the proper rest he needs to be at his best late in the regular season or your Fantasy playoffs — just some food for thought considering how hot he was last year down the stretch.

9. Steve Mason, Columbus Blue Jackets (NR): Mason’s win total should improve just because if he stays healthy he will play more than 61 games. He is a perfect No. 2 to have on your Fantasy team because most nights it’s a 2-1 or 3-2 game. Mason’s 33-20-7 record with 10 shutouts won him the Calder. And let’s not forget that 2.29 GAA…that was nice. I will take some heat for this as well. Mason is barely a top 10 goalie in Fantasy leagues, but because this seems to be the year of 1a and 1b again, he will benefit greatly. About 36-38 wins, a 2.32 GAA and a .917 save percentage along with seven or eight shutouts would not be a surprise for Mason.

10. Ryan Miller, Buffalo Sabres (10): Simply look at how well he was playing before he got hurt. Thanks, Scott Gomez. Remember that Miller had 34 wins in only 59 games last year; he likely would have topped 40 wins with around a 2.50 GAA and maybe seven shutouts had he been healthy. However, we will never know. Well, for this season, 38-40 wins for Miller is about right. Add in the 2.45 to 2.50 GAA and a save percentage close to .920 and you have a guy that should sneak in under the radar in some Fantasy leagues. Sometimes, the veteran gets it over the young guns.

11. Pekka Rinne, Nashville Predators (NR): Last year was no fluke and he will prove it. The Pred goalie should be expected to help your Fantasy team even with a funny first and last name. Rinne’s expected 36-38 wins with a nice GAA and save percentage will make you say Dan Ellias and Tomas Vokoun who?

12. Jonas Hiller, Anaheim Ducks (NR): Hiller will be the No. 1 in Anaheim and rack up numbers. He is set up for a very nice season. Anaheim has gotten younger and without the Chris Pronger trade distraction, the only thing left is J.S. Giguere, and you can expect him to get traded during the season. Hiller is a good goalie to take a bit later.

13. Nikolai Khabibulin, Edmonton Oilers (NR): He will be better than Cristobal Huet this year, however, not by much. Khabibulin does like playing on a team with fast tempo (Chicago and Tampa). The numbers will be good — maybe even better than Chicago — because he knows he will be the No. 1, but still has the pressure.

14. Cristobal Huet, Chicago Blackhawks (NR): With that offense, he should be up here. Even missing Marian Hossa for a month or two, Chicago will score. And Patrick Kane, even with the distraction, will still produce. So even with global warming, Huet will produce. You get the idea…draft him late.

15. Marc Andre-Fleury, Pittsburgh Penguins (6): Expect a hangover, yes, but a better second half. Fleury is more inconsistent than the Devils defensive corps, yet he won a Stanley Cup last year. Go figure! It really comes down to the fact that this is a guy that plays better later in the year. Maybe even stash him as your third goalie, if possible.

16. Tomas Vokoun, Florida Panthers (14): He still puts up solid numbers, but has little support. The other wrinkle is Scott Clemmensen — will he help or hurt Vokoun? That is a big question. Clemmensen helped spell a goalie like Brodeur, but Vokoun is no Brodeur. Maybe someone should go Distant Early Warning and signal red alert!

17. Chris Mason, St. Louis Blues (NR): Which C. Mason will we see? He is a lot like a bipolar person; you do not know which goalie you will get or if he will stay healthy. If Mason stays on top of his game, he is worthy of this list. If not, seek other options immediately and run to your waiver wire. This is a buyer beware situation, and it would help if the Blues can stay a bit more healthy as well. Send medikits.

18. Chris Osgood, Detroit Red Wings (12): Osgood will have a better regular season; he almost has to. Sure, we know he’s getting older, but Detroit is a good regular season team and Osgood knows he is under the microscope — fairly or unfairly. We’d recommend that early in the season you just keep the waiver wire on speed dial just in case.

19. Jon Quick, Los Angeles Kings (NR): Quick is an up and comer that could be in the top 10 soon. Expect a nice rise and more starts out of Mr. Quick. He plays in a pretty good defensive system and should get a bit more support this season and that spells trouble for Fantasy owners that do not draft this guy as a nice No. 3 goalie.

20. Craig Anderson, Colorado Avalanche: (NR): Anderson could put up some nice numbers; he is The Matrix, after all. Great reflexes, little respect, and little support have characterized Mr. Anderson’s career. Let’s see what he can do as a No. 1 in Colorado. This will be quite the test for a netminder starting to enter into his prime beef years.

21. Simeon Varlamov, Washington Capitals (NR): Takes the bull by the Caps’ horns.
22. Marty Turco, Dallas Stars (3): Has to have a better year for Dallas.
23. Ray Emery, Philadelphia Flyers (NR): We had to put him on here somewhere.
24. Jonas Gustafsson, Toronto Maple Leafs (NR): I can see the monster doing pretty well.
25. Carey Price, Montreal Canadiens (13): Because it cannot get much worse than last year.

By Chris Wassel
Tags: 2009-10 NHL Draft Kit
This entry was posted on Thursday, September 10th, 2009 at 1:31 pm and is filed under 2009-10 RotoRob NHL Draft Kit, Cheat sheets, Chris Wassel, HOCKEY. You can follow any responses to this entry through the RSS 2.0 feed. Both comments and pings are currently closed.