The Wire Troll: The End is Near 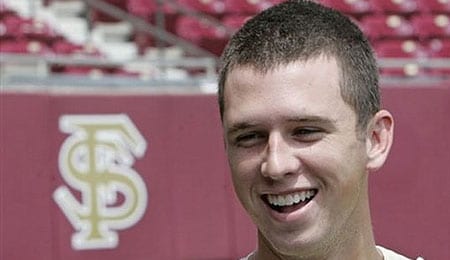 As another long season of baseball winds down, I just wanted to thank our readers for your support this past season. Twenty-two Wire Troll articles later with over 250 player reviews and it’s time for a much needed vacation. Good fortunes to you and your Fantasy squad in that crucial stretch run and we’ll catch you back in the spring, ready for another season of trolling the wire.

Jake Fox, 3B/OF, Chicago Cubs: It seems that the ailing left knee currently being suffered by Alfonso Soriano will prematurely bring an end to his season creating an opportunity for Fox to find additional at-bats in September. (By the way, the Cubbies actually make me proud to admit I’m a Maple Leaf fan.) In 177 at-bats, Fox has hit 10 homers, driven in 39 and is currently sporting a .282 BA. If a boost in the power numbers down the stretch meets your needs, Fox makes for a great addition.

Buster Posey, C, San Francisco: The playing time is probably not going to be there, but you have to love this kid heading into 2010. Posey moved from Single-A to Triple-A this season and didn’t skip a beat. His combined numbers down on the farm in 422 at-bats, were 18 dingers, 80 RBI and an outstanding .325 BA. The future is looking awful solid for this 22-year-old phenom, especially with Bengie Molina on the final year of his contract. If Posey is not locked up in your keeper league, resolve this one right smartly.

Brett Myers, SP, Philadelphia Phillies: Saturday night against the Astros we saw Brad Lidge at his finest. A line of 2/3 IP, two hits, two walks, two earned runs and a 10th blown save is not going to cut the mustard for division-leading Philadelphia. Myers, seeing his first action since returning from the DL, pitched a scoreless eighth inning. I congratulate the Phillies on their loyalty to incumbent Lidge, but enough is enough. A repeat of the World Series is not happening unless they can sort out their bullpen woes, and now is the time, not the ninth inning of Game Seven of the NLCS. Myers does have history on his side with those 21 saves back in 2007, and makes for a great addition if you need a push in saves down the stretch.

Brandon McCarthy, SP, Texas Rangers: In his first start since coming off the DL after a stress fracture in his right shoulder blade, McCarthy enjoyed a solid outing against the woeful Jays. In 6 1/3 IP he allowed only three hits, two walks and one earned run in gaining the victory. He is scheduled for two starts this week, with the injury-depleted Indians and the Mariners on the agenda. If the need for streaming pitchers is part of your plan for that final push to get you over the top, McCarthy is a fine addition in all formats.

Michael Brantley, OF, Cleveland Indians: Now that the Indians have finally shut down Grady Sizemore for the season, there should be no shortage of at-bats for the 22-year-old Brantley. What he brings to the table is speed, speed and more speed. At Triple-A Columbus, he was 46-for-51 in the stolen base department and equally as important were those 59 base-on-balls and only 48 strikeouts. It would appear that this kid has a solid knowledge of the strike zone. If your need is speed down the stretch find a spot on your roster for Brantley immediately.

Daniel Hudson, SP, Chicago White Sox: Hudson is a possible spot-starter down the stretch for those looking to gain last minute pitching stats.

Chris Perez, RP, Cleveland Indians: He hasn’t allowed an earned run since July 7 and the scoreless streak has now reached 20 2/3 IP. For those that questioned the Mark DeRosa trade the answers are starting to look very positive for the Tribe.

Cameron Maybin, OF, Florida Marlins: The injury to Jeremy Hermida should generate at-bats for Maybin down the stretch

Carlos Guillen, 1B/3B/OF, Detroit Tigers: Three long-balls in the past week with position flex makes Guillen a solid addition in all formats.

Tyler Flowers, C, Chicago White Sox: Temper your expectations for 2009, but lock him up in keeper formats.

Freddy Sanchez, 2B, San Francisco Giants: Sanchez is scheduled to return from the DL Monday. Middle infielders that hit for average can be of assistance over those last couple of weeks.

By Tim McLeod
This entry was posted on Sunday, September 6th, 2009 at 11:36 am and is filed under BASEBALL, The Wire Troll, Tim McLeod. You can follow any responses to this entry through the RSS 2.0 feed. You can skip to the end and leave a response. Pinging is currently not allowed.