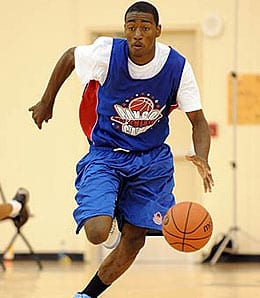 The Kings are projected to get Kentucky’s John Wall in the 2010 draft, assuming they don’t screw up in the lottery again.

Welcome to the 2009-10 RotoRob NBA Draft Kit. Over the next several weeks, we’ll be previewing every team while also releasing a bevy of goodies such as cheat sheets, sleepers, busts, rookies and perhaps a mock draft or two. Sit back and enjoy the ride as you start gearing up for the upcoming hoops season.

The Sacramento Kings, once the model small-market franchise, showed improvement in 2007-08, but absolutely bottomed out last season.

Worse yet, the NBA’s worst team in 2008-09 couldn’t even get it right at the Draft Lottery.

The Kings had a 25 per cent chance of landing the top overall pick and earning the right to draft impact rookie Blake Griffin, but they dropped all the way to fourth overall – the worst possible slot they could pick from. It appears even Lady Luck doesn’t like the Kings, and that’s why it won’t surprise anyone if they once again finish dead last in the NBA in 2009-10.

Maybe this time they’ll get it right, and land themselves Kentucky PG John Wall, expected to be the No. 1 overall pick in next year’s draft.

Either way, one thing seems set in stone: it’s going to be another long season in Cowtown. At least eight Western Conference teams will have to be abducted by aliens for the Kings to avoid missing the playoffs for a fourth straight season.

With the fourth overall pick, the Kings landed Tyreke Evans, and there’s already talk that he could take over the PG duties in Sacramento, but that might be unwise. He’s not a true one-guard, needs major work on his decision making and is best suited as a two-guard, or perhaps as a combo. But the problem is that the Kings’ best player and only bona fide scorer – Kevin Martin – mans the two guard spot.

Admittedly, the injury-prone and maddeningly inconsistent Beno Udrih is no one’s idea of a perfect solution, but his assists-to-turnover ratio is vastly superior to what Evans displayed in college, so don’t expect Evans to see much time at PG other than as a last resort. Of course, the fact that Udrih already got hurt this summer in the FIBA is not a good sign, but he’s expected to be good to go when training camp starts later this month.

Another big bonus for the Kings is that Martin should be healthy after missing 31 games last season. The hole he left in the King lineup forced the team to employ Rashad McCants (still an unsigned free agent) in a much larger role than anyone anticipated. It made for an ugly scenario – especially away from Arco Arena where the Kings only managed a half dozen wins, earning victories in just four of their final 34 road tilts. You don’t need me to tell you that ain’t gunna get it done.

Despite the fact that they were under the salary cap as of last month, the Kings didn’t exactly make huge waves this offseason. They traded for PG Sergio Rodriguez, a player I have always been high on and one who could be a serious sleeper if he can get his act together and overtake Udrih.

Sean May, the WebMD poster boy, was also brought in on a one-year deal, and if he can ever avoid eating 72-ounce steaks for breakfast, get into game shape and stick around the lineup for more than 10 games at a time, he could be a big bonus. But I’m not holding my breath.

After the Reggie Theus experiment ended poorly, the club hired Paul Westphal as its new head coach. The last time he was head coach in the NBA was 2000. Uh, yeah. Way to reach for the stars, guys!

Nocioni and Garcia will slug it out at SF, but a busted finger at the FIBA Americas Championship will slow Garcia. Regardless of whether he’s starting or coming off the bench, as long as Garcia is healthy he’ll have Fantasy value because of his across-the-board production and ability to back up multiple positions. Green (who will also see time at the four, and might even play some two-guard in a pinch – he’s incredibly versatile) and rookie Omri Casspi also need PT at the three, so the Kings will have some juggling to do here.

Although his shooting left something to be desired last season, Martin has continued to show progress in every one of his five NBA seasons – especially as a threat from downtown. He generated more scoring from the line and is poised for his first 25 PPG season should he avoid the injury bug.

Udrih’s propensity for getting hurt, combined with the need to work Evans into the lineup, makes him a very dangerous Fantasy play.

Thompson’s solid rookie effort was lost in a sea of tremendous freshman performances across the NBA in 2008-09. But don’t overlook the fact that this kid averaged over 14 points, 10 rebounds and 1.3 blocks per game in April. Thompson should log over 30 MPG, making him an interesting Fantasy play as he continues to develop his game. Hawes is also poised for a big improvement, although after last season, no one will be sleeping on him.

Evans is destined to see a hell of a lot of time on this team, regardless of whether he’s starting or coming off the bench. One of his key attributes is an ability to get to the line, so expect him to pile up nice scoring totals for a rook, and the fact that he’s got great speed as a defender and a tremendous work ethic means that he’s going to get enough PT to make him a Fantasy worthy freshman.

Casspi, the first ever Israeli taken in the first round, is definitely a name to tuck away, but I don’t see him as an impact player this season. He showed good toughness in Summer League and even displayed a propensity for rebounding, a skill he never really exhibited in Europe. He’ll have to earn his PT, and won’t likely get enough minutes to be Fantasy worthy, but this 21-year-old has great offensive potential.

Can Udrih stay healthy? And how will Rodriguez react to extra PT once Udrih does get hurt? More importantly, can Evans usurp them both and prove the critics wrong by being able to handle the point? Is Hawes, who pissed the team off by blowing off Summer League, ready to become an elite Fantasy centre? Can May resurrect his career, or will he go down in a ball of flaming fat?