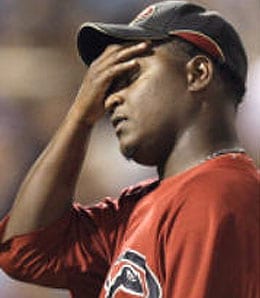 Juan Gutierrez struggled in his first taste of the bigs, but is now the D-Back closer.

On Sunday, closer Chad Qualls went down with a dislocated knee cap (ouch). It’s uncertain if there is any other damage, but Qualls is scheduled for surgery Thursday and will miss the rest of the season. With Jon Rauch traded to the Twins just a couple of days earlier, it remains to be seen just how the D-Back pen shakes down. But out of the blue, Juan Gutierrez, who just moved into a set-up role, has now taken over from Qualls as the closer. He’s been more hittable lately and has an ERA of 4.10, so he may not last long in a pressure role, but as things stand Gutierrez needs to be added in all formats. I’d like to see Arizona give rookie Clay Zavada (someone RotoRob touted back in June) a shot simply because in the one picture I’ve seen of the guy he has this really cool looking Rollie Fingers mustache. Trust in the ‘stache! Zavada has done some closing in the minors so it wouldn’t be a completely new role for him, although I’d like to see him improve his control a bit. Also in the closing mix could be right-hander Esmerling Vasquez. A flyball pitcher, Vasquez endured some early season struggles but he’s pitched better since June, lowering his ERA from 6.91 to 3.35.

Rafel Soriano got past his rough spot and a sore shoulder and is back to being a dominant force in the Brave pen again (although he has been scored on in his last two outings). He’s knocked down four saves in his last seven outings and looked good in the two of the last three no-save situations he was brought into with seven strikeouts in three innings of work. Soriano earned his 21st save on Tuesday, but it was not without its drama as he surrendered another homer — something that’s been a bit of a problem for him this season.

We’re two weeks into the Carlos Marmol era and he hasn’t walked himself out of the job yet. The wild child has been all over the place this year as evidenced by his enormous base on balls total (almost one per inning). Still, Sweet Lou Pinella has given him the ball in the ninth inning and told him to do his thing. Marmol now has eight saves on the year, nailing down his latest Wednesday night to finish off a shutout for Chicago. With the Cubs clinging to their playoff lives, Marmol has little room for error. Kevin Gregg (who has looked flawless since losing the job) is still waiting in the wings as are Angel Guzman and John Grabow. Many think Guzman should have been given the closing job instead of Marmol, but there’s also the possibility that Guzman will get a chance to start next year. The lefty Grabow, meanwhile, continues to be lights out since arriving in Chicago, having tossed 16 scoreless outings now. A free agent to be, Grabow’s performance must be giving his agent a serious woody.

Leo Nunez has maintained the Marlin closer job despite the return of Matt Lindstrom. Nunez had saves in five of his last six appearances before blowing one Tuesday, and looked solid doing it by limiting baserunners. Meanwhile, Lindstrom has looked good lately, lowering his ERA from over 6.50 to the low 5s. It won’t win him the Cy Young, but it’s progress. If Nunez falters (and he did blow the save Tuesday, although earned the win as the Marlins battled back), the Marlins won’t have any problem letting Lindstrom be the man again. In fact, I’d be watching Nunez’s next outing very closely before deciding who will be the man in Florida this month.

Jonathan Broxton hasn’t allowed an earned run in his last 10 appearances, giving up a mere six hits during this run. His toe doesn’t seem to be giving him any trouble as his control has been good and he’s still making batters miss. In fact, he’s reached 30 saves for the first time, and check out his K/9 — 13.5. Now, that’s dominance. I wouldn’t go dumping lefty George Sherrill just yet (at least not in any NL-only leagues), but you Broxton owners can now breathe a little easier.

Trevor Hoffman was placed on waivers last week and the Giants claimed him, but don’t worry; he’s not going anywhere. Looks like a simple case of the Brewers seeing if they could slip Hoffman past waivers but it didn’t work. There were no negotiations to speak of so it looks like the Giants were just trying to block any potential trade. The all-time saves leader has had a resurgence this season and is pitching as good as ever. With the waiver nonsense behind him he can go out keep racking up saves.

How come it’s news when Brad Lidge actually pitches well? Probably because he’s sucked so bad to this point in the season. In six of his last seven outings Lidge hasn’t allowed an earned run.  That’s progress I guess. But the jury remains out on whether he’s ready to be the man come playoff time. After all, he did have an ugly outing on August 25 when he allowed three earned runs without recording an out to keep his imperfect record at 0-6. Despite two flawless saves since then, his ERA is still over 7.00. Ugly, ugly, ugly.

Apparently, the Cards like the job Ryan Franklin has done this year since they just signed him to a two-year extension. It’s money well earned for Franklin, who has had an incredible season. He’s leading the league in saves (37 in 39 chances), has a miniscule ERA and WHIP and has been everything the Cards have needed out of a closer. Franklin has been one of the top closers in the game this year and possibly the best in the National League (although Heath Bell and Broxton might have something to say about that).

Out of the ashes, Mike MacDougal has saved the National bullpen and resurrected his career. While he can be a wild and crazy guy at times he kept his walks under control in August and racked up eight saves in the process. His first September outing — albeit, it was in a non-save situation — was ugly, so I wouldn’t say he’s a sure thing for next year. There’s no telling if Jim Riggleman will be back as manager next year so bullpen roles might shift with a new skipper. Still, the Nats have to be thankful that MacDougal fell into their lap this year as he stopped a lousy season from becoming much worse.

By Todd Habiger
Tags: Leo Nunez
This entry was posted on Thursday, September 3rd, 2009 at 1:35 pm and is filed under BASEBALL, Saving Grace, Todd Habiger. You can follow any responses to this entry through the RSS 2.0 feed. Both comments and pings are currently closed.