The Wire Troll: The Rosters Expand 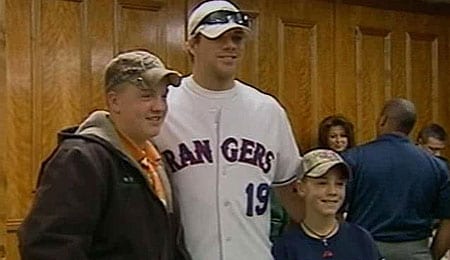 Can Chris Davis win himself some new fans this time around?

Ah, there’s nothing like the September roster increases to start a steady stream of player influx into the majors and onto our Fantasy rosters. Yes, these callups can and will be of importance to many Fantasy teams but don’t forget about the veteran players. Playing time is always the issue and make sure before you commit to players in redraft leagues that those opportunities will be there.

Chris Davis, 1B, Texas Rangers: In 165 at-bats down on the farm, Davis managed an outstanding .327 BA, six homers and 30 RBI. He also accumulated 25 walks, and while the strikeouts were still a bit on the high side (39), he’s definitely trending in the right direction. The stint at Triple-A Oklahoma City seems to have righted the ship for Davis somewhat, but it is important to remember that he is only 23 and has tremendous potential heading into the future. With the struggling Hank Blalock currently banished to the bench, Davis is going to get the lion’s share of opportunities in September and should be rostered in all formats.

Chris Young, OF, Arizona Diamondbacks: There is nothing like a stint down on the farm to get one’s head back into the game. Young was recalled Saturday by the Diamondbacks after posting great numbers in the minors. In 54 at-bats at Triple-A Reno, he managed three homers, nine RBI, and scored 17 runs. He was tearing the cover off the ball to the tune of a .370 BA and what is even more impressive is that he managed nine walks. Young should get regular playing time down the stretch. Next year, could he be the 2009 version of Mark Reynolds?

Andy Marte, 1B/3B, Cleveland Indians: Anyone who managed to see this one coming has to be in the fortune telling racket. At Triple-A Columbus in 300 at-bats, the 25-year-old former top prospect hit 18 homers and drove in 66 runs with a .327 BA. When the Indians traded Ryan Garko to the Giants at the end of July, Marte moved into the first base gig and hasn’t looked back. In his past 10 games, he is hitting .417 with three homers and 12 RBI. Get him rostered in all formats while he’s currently on a tear.

Brian Duensing, SP, Minnesota Twins: The Twin starting rotation is in disarray and if they have any hope of winning their division, the 26-year-old southpaw is going to have to play a major role. Since being inserted into the rotation August 22 against the Royals, Duensing has responded in fine form winning both of his starts. He was particularly brilliant on Friday, shutting down the Rangers with a nifty three-hitter while fanning eight. Heading into September, Duensing is a decent option for both the Twins and your Fantasy squad.

Eric Young, Jr., OF, Colorado Rockies: The 24-year-old converted second baseman got the call to replace the injured Dexter Fowler and Carlos Gonzalez. Young put together a solid season for Triple-A Colorado Springs with seven long balls, 43 RBI and 58 stolen bases. In five games since being called up, he’s managed five hits while being caught stealing twice. The name of the game for Young is speed so he has to step it up quickly or he could very well find himself riding the pine as the Rockies are in the thick of a playoff race and patience will not be one of their strong suits. He should be added in all keeper formats and is at least worthy of a look-see in deeper leagues if you need speed down the stretch.

Milton Bradley, OF, Chicago Cubs: He’s currently on fire and earning that big payday he received this past offseason. In the past six games, Bradley is killing the ball to the tune of a .583 BA, with two homers, six RBI, and 10 runs scored. Nice of you to finally show up, Milton, being that the Cubbies are only nine games back of the front running Cardinals heading into September. Better late than never I suppose. And given that he is out there in many 10- and 12-team leagues, grab him while he’s both hot and not on the DL or in Lou Pinella’s doghouse.

Alex Gonzalez, SS, Boston Red Sox: Theo Epstein made another in a series of shrewd moves in acquiring Gonzalez for Kristopher Negron back on August 14. Gonzalez has been hitting for both average and power since being acquired by Boston and is very quickly making the Red Sox faithful forget about both Nick Green and Jed Lowrie. In his past 10 games, Gonzo has hit three homers, driven in six runs and scored another six, very solid production out of a bottom-of-the-order type bat and something that definitely warrants attention in AL-only and deeper formats.

Sergio Mitre, SP, New York Yankees: 6 1/3 IP of one-hit ball Saturday against the White Sox should guarantee his roster spot for at least another week.

Michael Aubrey, 1B, Baltimore Orioles: One last chance for the former top prospect to show he belongs.

Brendan Ryan, SS, St. Louis Cardinals: Underrated, under appreciated but not under producing.

Wade Davis, SP, Tampa Bay Rays: Someone at Durham gets the call to replace the recently traded Scott Kazmir and Davis has 135 reasons over 154 2/3 IP why he’s the right man for the job.

Steven Pearce, 1B, Pittsburgh Pirates: He’s worth a look in NL-only leagues.

Felix Pie, OF, Baltimore Orioles: Pie filled in nicely while Adam Jones was out with back issues and the potential is there to for him to steal at-bats down the stretch if Jones continues to struggle.

Jack Cust, OF, Oakland Athletics: Does a .406 BA over the past 10 games suggest that Jack is on the Cust of greatness? (Sorry….couldn’t resist cramming one silly pun in there.)

John Smoltz, SP, St. Louis Cardinals: Smoltz has racked up two quality starts with 15 strikeouts and only one earned run and with the Pirates next on his dance card, opportunity is knocking.

Tim Hudson, SP, Atlanta Braves: Hudson returns from the DL in a two-start week, but proceed with caution.

Trevor Cahill, SP, Oakland Athletics: Make that four consecutive quality starts for the 21-year-old and he’s facing the Royals next. Five is a distinct possibility.

Jason Heyward, OF, Atlanta Braves: Maybe this is a bit of a reach for this year, but get him rostered in all keeper formats.

Willie Harris, OF, Washington Nationals: Subbing for the injured Nyjer Morgan, Harris will get playing time opportunities in September.

David DeJesus, OF, Kansas City Royals: DeJesus is on a tear with a .366 BA, three homers, eight RBI and 10 runs scored over his past 10 games. Grab him while he’s hot.

By Tim McLeod
This entry was posted on Sunday, August 30th, 2009 at 9:39 am and is filed under BASEBALL, The Wire Troll, Tim McLeod. You can follow any responses to this entry through the RSS 2.0 feed. You can leave a response, or trackback from your own site.