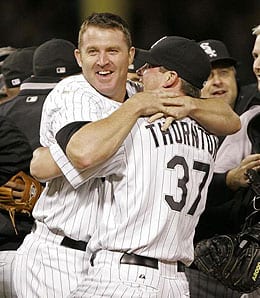 How much should we read into Matt Thornton picking up a save when Bobby Jenks was out?

Well the George Sherrill era finally ended in Baltimore when he was dealt to the Dodgers and the time of Jim Johnson is upon us. Johnson is a 26-year-old righty in his second full season with the Os. He doesn’t have dominant stuff, but relies on good command. Johnson, who earned his fourth save Tuesday, has at least three pitches that he can throw with consistency and his challengers to the closing crown are somewhat lacking so he should be good for this year unless he cracks under the pressure. Danys Baez had one opportunity to save a game and blew it in a big way. He’s probably not your best bet this year, but he has seemed to take over Johnson’s role, so expect more holds. Chris Ray is still trying to find his game after Tommy John surgery. His overall numbers are terrible, but since they Orioles aren’t going anywhere they can afford to let him work out his problems with the big league club to see what they’ve got and what to expect for next year. On the plus side, perhaps Ray is finally getting his act together; seven straight shutout appearances have seen him trim over three runs from his ERA. I’d keep a closer eye on him over the final few weeks to see if he can’t earn a more responsible role in the Oriole bullpen.

Bobby Jenks has been battling kidney stones recently and hadn’t had a save in three weeks because of the injury, lack of opportunity, oh, and a couple of blown saves in there. He did nail down his 23rd save in 27 tries Tuesday, however. While Jenks was out there weren’t a lot of save opportunities to be had (Matt Thornton picked up the only one), so it’s not obvious who Ozzie Guillen favours in the saves pecking order if Jenks is unavailable. Guillen’s pretty adamant that Jenks is his man through thick and thin. With a deep bullpen of Scott Linebrink, Thornton, Tony Pena and Octavio Dotel, Guillen has plenty of options should Jenks be out for any extended period of time. More than likely, the back-up plan is the dreaded committee.

I’ve decided to stop the Kerry Wood death watch. The trade deadline came and went without him and his contract (which the Indians must regret giving him) getting dealt. Wood hasn’t been a top tier option this year, but he has the job for now and the foreseeable future and that’s half the battle. If you’re looking to next year it might be time to try to buy low on Wood. Meanwhile, after a rocky start as an Indian, Chris Perez has settled into a nice groove and is starting to look like the guy I bragged on in Spring Training. If you want to look way long term, like 2011, Perez is your guy.

August has started out a little rough for Fernando Rodney. In three of his last five appearances he’s allowed at least one earned run and teams are getting hits off him. Hell, he even blew his first save of the year. Could the wheels be coming off? Is overuse a factor (Rodney is headed for a career high in appearances)? I’m not sure, but with the Tigers in the thick of things, don’t put it past Jim Leyland to make a quick switch if Rodney starts blowing games. Brandon Lyon should be next in line for saves. After a rough start to the season, Lyon has been excellent for the past few months, just in time for a kick at the free agency can after the season. Although his walk rate is up this year, it’s not bad enough so that he’s going to hurt himself. Rookie Ryan Perry probably won’t get any save opportunities as he works to establish himself, but is someone you might want to look at long term. He’s got a great arm, but has a tendency to be a little wild. If he can harness his control he might just be a player next season.

Joakim Soria got smacked around on Saturday to the tune of four hits and three earned runs while pitching in a non-save situation. Up until that point, he had been lights out for the Royals. Unfortunately for Soria owners, you have to have some wins to get some saves, and wins have been few and far between for the hapless Royals this year. I wouldn’t worry about Soria’s bad outing. Closers tend to look like batting practice pitchers when they’re not in a save situation. Soria’s one of the top closers in the game, but he just happens to play on the worst teams in the AL.

Brian Fuentes had three straight bad outings recently giving up a total of seven earned runs and, in two cases, not even recording an out. Although he’s bounced back with a couple of scoreless outings, I’d be a little worried if I were a Fuentes’ owner. This workhorse has pitched himself out of a job before with Colorado so it’s not out of the question that he could pitch so poorly that he would lose his job. The trouble is, there aren’t a lot of great options to go to in the Angels pen. Darren Oliver is having a decent season, but come on, this is Darren Oliver we’re talking about. He can’t be an option – can he? At this point, he’s a veteran who’s main task is to get out lefties. Jason Bulger has been extremely hard to hit, so he’s established himself as a possible option. He even racked up a save at the end of July. Jose Arredondo has finally worked his way back from being banished to the minors, however he looks like anything but the pitcher that dazzled us last year. He’s not really an option right now for the contending Angels.

He’s back. Frank Francisco has made a triumphant return to the closer role. Again. For the third time. As I’ve said before, don’t be banking on Franky the rest of the way. Sometimes it’s just not your season. And the way things have being going for Francisco this year, I’m guessing it’s not his season. Yes, he’s been brilliant when healthy, but stretches of health seem to be few and far between this year. C.J. Wilson has slipped a bit recently — taking a serious beating in Oakland just over a week ago– but don’t make the mistake of writing him off yet. He’s been a consistent force in the pen this year and could will get some saves when Francisco re-injures himself. You know it’s going to happen.

Don’t look now, but Downs is down again. Scott Downs, that is. Downs, you may remember, took over closing duties from the ineffective and since released B.J. Ryan. He was pretty much lights out until a toe injury landed him on the DL for three weeks. Following his return he clearly wasn’t the same pitcher. Now that same toe has him back on the DL. Jason Frasor will take over closing duties in the meantime. Frasor, who nailed down his fifth save on Monday, has put together a career season. He’s had only one bad outing this year and that was way back in May. Frasor needs to be picked up immediately as he could possibly be the man for the rest of the season. Downs is under contract for 2010, so the Jays are likely to give him every chance to close next season. But with Toronto going nowhere this year, there’s no need to rush Downs (considered week-to-week) back.

By Todd Habiger
This entry was posted on Wednesday, August 12th, 2009 at 9:02 am and is filed under BASEBALL, Saving Grace, Todd Habiger. You can follow any responses to this entry through the RSS 2.0 feed. You can skip to the end and leave a response. Pinging is currently not allowed.