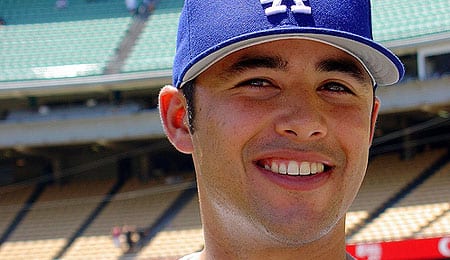 Upon closer inspection, Andre Ethier appears ready to have a massive second half for the LA Dodgers.

When Manny Ramirez was slapped with a 50-game suspension, we predicted that Andre Ethier would suffer most from his absence.

Well, we were half right, as Ethier did stumble badly in May (.211 BA, one homer, 601 OPS) after his excellent start to 2009. Well, the rollercoaster ride that has been Ethier’s season to date continued in June, as he flicked the power switch in a big way, mashing nine of his team-high 19 dingers. But just as quickly, things went south in July (745 OPS, four homers), even with Manny back to offer lineup protection.

Recently, Ethier’s struggles have seen him dropped from a few very shallow leagues, but this could be a grievous error, and if you play in such a tiny league, take note. A traditionally better player in the second half (especially last season after Ramirez arrived in LA), Ethier is starting to turn it on, going 6-for-12 with three runs, two doubles, a homer, two RBI and a walk over his last three games.

Because of his inconsistency, Ethier may have frustrated some of his owners. Take advantage of this if you can. While his overall numbers have fallen from his career year last season (mostly because of a near 50-point dip in BA), he’s just one homer shy of matching his career best and his patience continues to improve year by year. While he’s made more errors this season in right field, Ethier’s range factor has improved.

To me, all signs point for a huge second half for Ethier – especially in the home run department. He’s at that magical age 27, he’s a better second half hitter, and ManRam’s presence should be beneficial. If you can pry him away for the stretch run, do it.

By RotoRob
Tags: Andre Ethier
This entry was posted on Wednesday, July 22nd, 2009 at 11:55 am and is filed under Another Look, BASEBALL, RotoRob. You can follow any responses to this entry through the RSS 2.0 feed. Both comments and pings are currently closed.