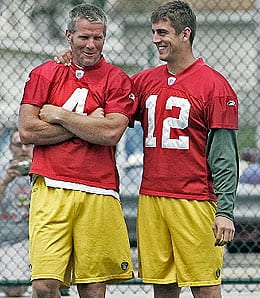 Aaron Rodgers (right) took over from Brett Favre and had a fine season.

We’re back with more of the 2009 RotoRob NFL Draft Kit as we release another team preview (we’re on the home stretch now, with just over a half a dozen teams remaining). We’re going to try to shoot out all these team previews and then start releasing the kit’s other goodies (cheat sheets, sleepers/busts lists, etc.). While we wait for Roger Goodell to decided if he’s going to speak to Michael Vick, let’s preview the Green Bay Packers, who will look to recover from a disappointing 2008 campaign.

From a production standpoint, the Packers couldn’t have asked for a smoother transition from Brett Favre to Aaron Rodgers, who started all 16 games and guided the NFL’s fifth-ranked scoring offense. It didn’t hurt that he was surrounded by playmakers, as Greg Jennings and Donald Driver both eclipsed 1,000 yards receiving, and Ryan Grant shook off a slow start to finish with 1,200-plus rushing yards. Green Bay also led the NFL in defensive touchdowns, including five from Charles Woodson (seven INTs, two TDs) and Nick Collins (seven INTs, three TDs). Although the Packers finished 6-10, seven of those losses came by a combined 21 points, indicating they weren’t far from being in playoff contention.

The Packers simply couldn’t close the deal, going a nearly unfathomable 1-7 in games decided by five points or less. For all his success, Rodgers struggled to make plays late, and even when he did, either the defense or kicker Mason Crosby would let the team down. The defense endured some significant injuries — namely Cullen Jenkins, Nick Barnett and Atari Bigby — and stumbled to a 20th-place finish, costing Bob Sanders his job. Oh, and then there was that Favre debacle. Well, at least they won’t have to deal with that again…

As has been the case under GM Ted Thompson, the Packers are once again banking on internal improvement and help from the draft to rebound as they added only two free agents while losing only one player of note (Colin Cole). However, there is one significant change as the hiring of Dom Capers signals a shift to the 3-4 defense. It’s a big gamble for Thompson and Mike McCarthy as another sub-.500 season could cost both men their jobs, though the Packers certainly have the talent to challenge Minnesota and Chicago for the NFC North crown.

It was clear to anyone that watched the Packers last year that most of their problems were defensive, so it came as no surprise when they selected mammoth defensive tackle B.J. Raji with the ninth overall pick to anchor the 3-4. Thompson also traded up later in the first round to grab linebacker Clay Matthews. Both men should play immediately, though neither is guaranteed to start this year. The team also invested a pair of picks on the offensive line.

Arguably the most scrutinized player in the NFL entering 2008, Rodgers was not only asked to replace a legend but also quell doubts about his own toughness. To say he succeeded in both regards would be an understatement. Rodgers threw for 4,038 yards and 28 touchdowns against only 13 interceptions, and he brought an added dimension of mobility (207 rushing yards, four scores). He also played through a serious shoulder injury, which sounds eerily similar to his predecessor. It wasn’t all rainbows and puppy dog tails for Rodgers, however, as he could never engineer that signature game-winning moment. It certainly wasn’t entirely his fault, but he bears part of the burden given some poor throws in crucial moments (also eerily similar to his predecessor). Last year, Rodgers was an intriguing later-round flier in many leagues. This year, he’s a lock as a No. 1 quarterback and potential top three contributor at the position — just don’t bypass a proven backup as Rodgers’ durability concerns aren’t completely gone yet.

After emerging from obscurity in 2007, Grant held out for most of training camp and was largely ineffective over the season’s first six weeks, carrying the ball 106 times for 359 yards (3.4 per carry) and failing to score. He looked better down the stretch, however, and even become more involved in the passing game — five receptions in his first 10 games, 13 in his last six. His final numbers (1,319 total yards, four touchdowns) were passable, though it was the sheer number of carries (312) that allowed him to post those totals. That’s because the team appears to have no faith in Brandon Jackson, despite the fact he averaged 5.8 yards per touch last season. Jackson still projects as the No. 2 back, but in the event of an injury to Grant, don’t expect McCarthy to use Jackson as his top runner. Instead that job would probably fall to DeShawn Wynn (the nominal starter in ’07 before being injured), Kregg Lumpkin or Tyrell Sutton. Due to his heavy workload, Grant deserves a spot as a No. 2 Fantasy back while Jackson could hold late-round value in deep point-per-reception leagues. Wynn is a watch list candidate.

Few teams can match Green Bay’s depth at receiver, headlined by Jennings (80 receptions, 1,292 yards, nine touchdowns) and Driver (74-1,012-5). Jennings emerged as one of the NFL’s best deep threats in 2007 and did nothing to diminish that reputation last season despite the transition from Favre to Rodgers. He’s a threat to score every time he touches the ball and is a mid range No. 1 Fantasy receiver. On the other side, Driver is all about making tough catches in traffic, though he will occasionally break one for a long score. His biggest issue is a lack of end zone visits as his last 156 receptions have resulted in just seven touchdowns. Even at 34 he’s a rock solid No. 3 wideout with added value in point-per-reception formats. Jordy Nelson (33-366-2) and James Jones (20-274-1) are next up on the depth chart with Nelson being the steadier possession receiver. Jones, who flashed serious talent as a rookie, has to overcome durability concerns and problems with drops to get back on track. Neither man is viable outside of deep leagues, but both should be remembered in case of injury or if one solidifies their hold as the No. 3 receiver in Green Bay.

Donald Lee (39-303-5) took a major step back without Favre, and he could be in danger of losing playing time this season depending on how quickly Jermichael Finley develops. The team loves Finley’s ability, but he’s only 22 and displayed a lack of maturity as a rookie. Lee could be roster filler as a reserve tight end while Finley is a potential super sleeper in larger leagues — however, those playing in full keeper leagues should consider finding a bench spot to stash Finley based on his upside.

The Packers were a much better Fantasy defense than an NFL one last year based on their penchant to make big plays, but without those they were a below-average group. The team is switching to the 3-4, which could pay dividends down the line, but will likely be accompanied early on by some growing pains. The presence of home run hitters both defensively and on special teams makes them a group to watch, but it’s hard to advocate calling their name on draft day.

By Herija Green
Tags: 2009 NFL Draft Kit, NFL
This entry was posted on Wednesday, July 22nd, 2009 at 10:21 am and is filed under 2009 RotoRob NFL Draft Kit, FOOTBALL, Herija Green, Team report. You can follow any responses to this entry through the RSS 2.0 feed. Both comments and pings are currently closed.