The Wire Troll: Latch on to Latos 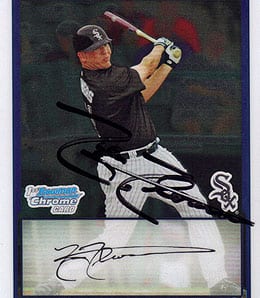 It won’t be long until catching prospect Tyler Flowers in knocking on the door of the Bigs.

A recent conversation with my good friend Steve Parsons reminded me of the cyclical nature that we see so often in this great game. Our chat veered into a discussion on some of the great group of kids displaying their catching prowess down on the farm. Tyler Flowers, Carlos Santana, and Buster Posey are now all playing at the Triple-A level and all should be forces behind the plate heading into the 2010 season. Those playing in dynasty keeper formats would be best advised to give each of these youngsters a serious look-see and make plans accordingly heading into the 2010 season.

What once was a veritable wasteland position — catcher — could in fact soon be one of strength and not all that far down the road. Toss Oriole phenom Matt Wieters into the mix and we have even more potential at the catcher position just down the road.

Moving on, let’s take a look at some picks to click heading into the first full week of play after the mid-season classic.

Mat Latos, SP, San Diego Padres: The 21-year-old Latos has enjoyed a stellar season for Double-A San Antonio and has been recalled by the Padres. He is penciled in to get his first big league start Monday at home against the Fish. Down on the farm, Latos compiled a 5-1 record and 1.91 ERA in 47 IP. He allowed a scant 32 hits and only nine free passes in limiting the opposition to a .192 BAA. This kid has demonstrated he is ready for his first shot at the show, but be modest in your expectations as Latos is barely out of diapers and pitching for the offensively-challenged Padres. He is the type of player that is not going to stay a free agent on waiver wires for very long and it would be prudent to move early in all keeper formats, H2H and NL-only leagues.

Marc Rzepczynski, SP, Toronto Blue Jays: The 23-year-old southpaw earned his first victory as a Jay Saturday with a fine effort against the Boston Red Sox. In three starts since being recalled from Triple-A Las Vegas, he has limited the opposition to only five earned runs and has struck out 16 in 18 IP. Now for the bad news, Rzepczynski has also allowed 11 walks in this stretch. He has managed to pitch out of numerous jams, but unless he finds a way to limit the free passes one should be just a tad concerned looking forward. Those walks will eventually lead to some ugly lines if Rzepczynski doesn’t find a way to harness them. That being said, find a home for him in AL-only leagues and keep him filed away for future reference in standard 12-team mixed formats.

Shaun Marcum, SP, Toronto Blue Jays: Last year, Marcum was well on his way to his finest season as a Jay until Tommy John surgery ended his 2008 campaign in September. He has now finished his third successful rehab start, the most recent of which was at Double-A New Hampshire, and looks to be on schedule for an early August return to the Toronto rotation. The 3.39 ERA and 1.16 WHIP he racked up prior to surgery should be a reminder of his great potential, so now is the time to gamble and find a spot on your bench, before he gets that first start or two under his belt.

Franklin Gutierrez, OF, Seattle Mariners: It appears that I was a year early and a dollar short on Gutierrez. In his past 10 games, he’s been on fire hitting to the tune of a .342 BA with four homers and 11 RBI. The 26-year-old former Indian seems to adapting to life on the West Coast extremely well. Then again, escaping the mess in the Cleveland organization had to be enough incentive all on its own. Ride the Gutierrez wave in all formats until it finds shore.

John Baker, C, Florida Marlins: Since the beginning of July, Baker has turned it up a notch and has put together a great .344 BA. On the season, he is batting .256 with seven homers and 26 RBI and makes for a fine acquisition in Fantasy leagues requiring two catchers and NL-only formats. Ask not what he will do for you, but what he won’t, and that would be occupying the catcher slot with a sub .200 BA.

Garrett Jones, OF, Pittsburgh Pirates: The 28-year-old was called up July 1 and, in 13 games, has now amassed seven homers, including five in his past five games. Those Ruthonian numbers are certainly not sustainable, but Jones was putting up great numbers at Triple-A Indianapolis before his promotion to the Pirates. Get him rostered in all formats and enjoy the late bloomer’s current hot streak.

Clay Buchholz, SP, Boston Red Sox: This guy just keeps Red Sox fans begging for more. In a spot start Friday night against the Blue Jays he allowed four hits, three walks and one earned run in 5 2/3 IP, earning his first victory of the season. This will further fuel the Brad Penny trade rumours in Beantown. Buchholz has been absolutely dominating at Triple-A Pawtucket, where in 99 IP he has seven wins, a 2.36 ERA, and has allowed only 67 hits and 30 walks while racking up 89 strikeouts. We haven’t seen the last of Buchholz this season and in any format where you have the bench space he is a solid addition.

Erick Aybar, SS, Los Angeles Angels: In his past 10 games, the 25-year-old Aybar has been on fire. He has hit to the tune of a .486 BA with one homer and seven RBI over that stretch. Is that untapped potential we’ve been expecting for the past couple of years finally coming to fruition? It is going to be difficult for Mike Scioscia to keep him in the eighth slot in that batting order if he continues producing at this level. Aybar is a solid acquisition in all formats at this time.

Jason Schmidt, SP, Los Angeles Dodgers: Okay, this pick is a bit of a reach, but Schmidt is scheduled for two starts this week and has posted decent numbers down on the farm during his recent rehab stint. In his last four starts and 24 2/3 IP at Triple-A Albuquerque, he has managed 23 strikeouts and gone at least five innings in each of those starts. Schmidt hasn’t pitched in the bigs since the 2007 campaign and only made six starts that season before going under the knife for shoulder surgery. The Dodgers are going to need another arm for the stretch run, and if he has put those shoulder woes behind him, he could prove to be an asset to both the Dodgers and your Fantasy squad.

By Tim McLeod
This entry was posted on Sunday, July 19th, 2009 at 12:50 pm and is filed under BASEBALL, The Wire Troll, Tim McLeod. You can follow any responses to this entry through the RSS 2.0 feed. You can leave a response, or trackback from your own site.