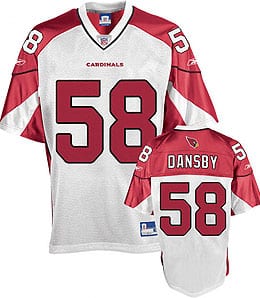 The 2009 RotoRob NFL Draft Kit returns today with yet another team preview (we’re on the home stretch now, with less than 10 NFC teams left to go). We’re going to try to shoot out all these team previews and then start releasing the kit’s other goodies (cheat sheets, sleepers/busts lists, etc.). While we’re waiting for Brett Favre to once again decide whether he’s in or not, let’s preview the Arizona Cardinals, who came within a whisker of their first ever Super Bowl title last season.

The Cardinal offense, while flawed towards the end of the regular season, ran over enemies for much of the ’08 season including the postseason. Kurt Warner, Anquan Boldin and Larry Fitzgerald paced a ferocious passing attack. The trio carried the Cards into the playoffs and nearly towards an improbable Super Bowl victory. Unfortunately, their defense failed to cover Santonio Holmes in the final two and a half minutes of the season.

Two things made Arizona’s post-season run shocking: an amazingly awful running game and a mediocre defensive unit (the same gang that got torched by Minnesota’s Tarvaris Jackson in Week 15). Edgerrin James’ performance and attitude ran him out of Arizona. Meanwhile, the defense defined inconsistency by showing glimpses of being world beaters one week followed by glimpses of being one of the league’s worst defenses the next.

To get a grasp on the philosophy of Arizona’s offseason, try reading Pat Riley’s The Winner Within and the “Disease of Me” chapter. When success comes unexpectedly, so
do the requests for more loot from players. Many looked for better contracts including Warner, Boldin and Karlos Dansby. Coaching changes also became an issue as offensive coordinator Todd Haley accepted the head coaching slot with Kansas City and defensive coordinator Clancy Pendergast got the boot in favour of Bill Davis. Arizona managed to address personnel needs by signing former Steeler cornerback Bryant McFadden to a deal to help fix its rather pedestrian secondary.

Arizona’s draft dealt with building depth on defense (it used five of its next six picks after first round on defensive players). Nonetheless, after their woeful showing on the ground in ’08, the Cards nabbed former Ohio State running back Chris “Beanie” Wells in the first round. Despite missing time in his final year with the Buckeyes due to a foot injury, expect Wells to get plenty of opportunities to be an impact player in the desert.

Kurt Warner getting the Cardinals to the Super Bowl is quietly one of the great NFL achievements over the past 25 years. If you were putting together a short list of franchises that would not make the Super Bowl in your lifetime, the Cards would probably be in the top three. Having said that, beware of a letdown for Warner. First off, the curse of the Super Bowl runner-up has claimed several casualties during the past decade including the latest, Tom Brady’s knee. Also, keep in mind the probability of Warner playing every game at 38. Lastly, Warner’s first two Super Bowl appearances were followed up by injury-plagued seasons.

The Super Bowl XXXIV MVP broke his hand during the 2000 season and missed five games. Following his ’01 MVP season, he played in only seven games due to a broken thumb suffered against Dallas. The injury also eventually led to fumbling problems and the Brenda Warner/Mike Martz feud which signaled the beginning of the end for him in St. Louis.

The moral to this story is to consider Warner a top-tier Fantasy quarterback, but keep your eye on back-up Matt Leinart. During 11 NFL seasons, Warner has never played all 16 regular season games in consecutive years.

Now that Edgerrin “three yards per carry” James is out of Arizona, the backfield duties will belong to Wells and second-year back Tim Hightower. They will try to improve the worst rushing team in the league (the Cards averaged just 73 yards per game). The Virginia product provided flashes, but is not a back who can handle a full workload. He is better suited as a pass catcher and third-down back.

Poor Anquan Boldin; lost in the haze of Fitzgerald’s epic postseason was Boldin’s performance. He established a career high in touchdown catches with 11 despite having reconstructive surgery to his face following a vicious hit by Jet safety Eric Smith in Week Four. Somehow, he only missed four games and made the Pro Bowl. However, he struggled at the end of the year and Fitzgerald took over, amassing career numbers. Fitz is widely considered Fantasy football’s number one receiver while Boldin would be a number one if not for injury concerns. Slot receiver Steve Breaston joined Boldin and Fitzgerald as the team’s third receiver to hit the 1,000-yard mark. Consider him a number three option in larger leagues.

Ben Patrick. Leonard Pope. I must write their names just to educate and inform. With the three headed monster at receiver, Arizona tight ends are an endangered species and best suited to block. Patrick, who caught a touchdown in the Super Bowl, and Pope, combined for just 20 catches during the regular season. Don’t consider them legitimate Fantasy tight ends unless they dictate otherwise.

Last season, Arizona’s defense finished 28th in points allowed per game and 19th in total defense but were amazingly a couple of plays away from winning the Super Bowl. It’s a feast or famine unit that wavers wildly between a play-making group and then one that gives up the big play. They lost defense lineman Antonio Smith to Houston, which will hurt an already shaky group. Meanwhile, the addition of McFadden should give their mediocre secondary a shot in the arm.