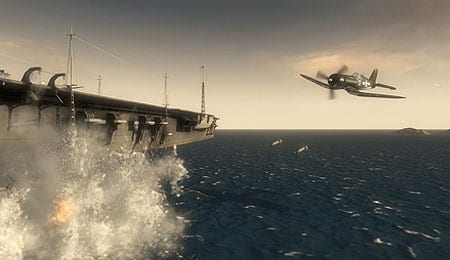 Feeling like blowing the shit out of something? Battlefield 1943 is for you.

Anyone looking for evidence as to just how far downloadable games have come on home consoles needn’t look any further than EA’s recent release, Battlefield 1943. In many ways, this game is a re-imagining of Battlefield 1942 (released back in 2002), and it doesn’t contain what you would call a robust package for gamers. In fact, if you’re not someone who plays online through Xbox Live (Gold required) or PlayStation Network you can stop reading right now as outside of a small tutorial Battlefield 1943 is an online-only experience. While that will undoubtedly cause some to dismiss the game, those that stay around to give it a whirl are in for a treat.

Battlefield 1943 offers the opportunity to fight a land, air or sea war, and there are different controls associated with each of them. The basic controls for your soldier are similar to most first-person shooters out there, moving with the left stick (click down to sprint) and looking with the right. The right trigger fires your weapon while the left enables you to look down the site or through your scope if you’re carrying a sniper rifle. The left bumper throws grenades, and the right bumper switches between your two weapons. When things get up close and personal, the Y button executes a melee attack.

While all of the above is pretty much standard fare, things get a little trickier with the vehicles, particularly when flying planes. Here, the left stick allows you move right and left, while the right stick controls not only up/down but also rotates the plane. It definitely takes some getting used to. Also, the plane’s primary weapon (bombs) is tough to time since you really don’t have a very good feel for where your bombs are going or when to release them. It’s undeniably fun to soar over the carnage below, though, which is why most games begin with everyone sprinting to the two available aircraft.

If you walked into a friend’s house and saw them playing this game you’d have no idea this was a downloaded title as opposed to a full retail release. The game is beautiful and has vibrant, bright colours that really make it stand out from the Call of Duty titles, which favour a darker, grittier backdrop. The water, palm trees, grass, sandbags — all of it just looks great. Plus, most of the environments are destructible, which is great to see in action. Unfortunately a few items are not, which combined with some uninspired character models and occasional clipping knock the overall visuals down a peg.

The audio for the game is simplistic but solid. At times when you’ll find yourself knee deep in action with explosions everywhere and planes zipping by overhead, while other times you’re isolated as you move across an area of the island far from the fighting with only the sounds of gunfire in the distance — in either situation the game does a nice job of capturing the experience. Also, part of what makes it extra cool is the fact that all those sounds of war you hear are coming from other human players. There’s no canned noise to simulate the sounds of battle.

As noted at the beginning of this review, Battlefield 1943 is exclusively an online multiplayer experience, which means there is no story/campaign mode whatsoever. On top of that, the game was released with only three maps (Iwo Jima, Wake Island and Guadalcanal) with a fourth map (Coral Sea) focused on aerial combat set to unlock once the total kill count eclipses 43 million. That means you’ll be finding very little variety from one game to the next, at least in terms of what you’re seeing.

Adding to the overall sense of déjà vu is the fact that the game only has one mode: conquest. Each map is divided into five points, and the goal is to capture and hold as many points as possible. The game does not end if you hold all five points simultaneously, however. Instead, the more points you hold the more each one of your kills on the opposition drains their reinforcement meter. In other words, if your side holds four of the five points, each of their kills carries more weight than the team holding just one. It creates some interesting strategy and is more cerebral than your typical slayer mode.

That type of game play can be a bit of a double-edged sword as those looking for a constant barrage of intense action aren’t likely to find it here. It’s rare to see someone eclipse 20 kills in a match, and in fact most players finish in single digits. Instead, this is more about ebb and flow as you’ll need to balance going for kills with maintaining enough controlled points. For lack of a better term it’s more of a “tactical” shooter than something like the Call of Duty series or Halo 3.

Within each game you’re able to choose from three kits, allowing you to be either a rifleman, infantry or scout (AKA sniper). Each class has its own strengths and weaknesses, but all three are blessed with infinite ammunition and rejuvenating health. This is done in the interest of keeping the game simple as opposed to including traditional support classes like medic and engineer. It’s a wise decision, too, as these maps are large and teams cap out at 12 members. By allowing unlimited ammo and health the game is kept moving along at a brisker pace. The game play is definitely not for everyone as patience and teamwork is rewarded whereas very little can be accomplished by venturing out solo.

Now, while four maps and one mode may sound like a recipe for repetition, I’ve actually found each game to be unique and therefore it doesn’t feel like I’m playing the same thing over and over again. However, with a game that is completely online, the actual staying power of the game will be determined by how active the community remains. Outside of some initial problems when the game launched (because they didn’t have enough servers to handle demand) I’ve had no trouble finding games whenever I log on. The question remains, though, how long will it stay that way? Particularly with Halo: ODST and Modern Warfare 2 releasing this fall.

It’s easy to get bogged down in what’s missing in terms of variety, but at just $15, Battlefield 1943 offers an engaging, visually impressive experience that surpasses many full-price releases on the market today. Seeing what DICE (the game’s developer) was able to pull off in a downloadable game is a real eye opener, and any fan of team-based online shooters should find this an incredible bargain.