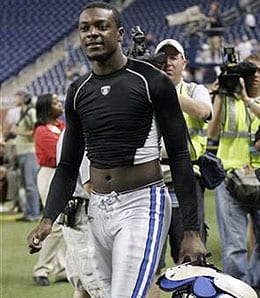 The sting of draft bust Charles Rogers was removed to an extent by Calvin Johnson’s emergence.

We’re back with more of the 2009 RotoRob NFL Draft Kit with yet another team preview (we’re on the home stretch now, with less than 10 NFC teams left to go). We’re going to try to shoot out all these team previews and then start releasing the kit’s other goodies (cheat sheets, sleepers/busts lists, etc.). Before we wonder if the Detroit Lions can ever win another game, I think the next round should be on Matt Cassel, who is now a pretty freaking rich dude.

Two words: Calvin Johnson. The former second overall pick officially exorcised the demons of Charles Rogers and Mike Williams (and to a lesser extent Roy Williams, who somehow escapes unscathed despite recording exactly one 1,000-yard season in his first five NFL seasons), emerging as one the NFL’s top receivers at just 23 years of age.

Just about everything else! The Lions became the first team in NFL history to go 0-16 with only three of their losses coming by fewer than seven points. They were abysmal on both sides of the ball with an offense that ranked 30th overall and a defense that finished dead last. Detroit put five different quarterbacks on the field last year with predictably disastrous results, and nobody did anything in the passing game opposite Johnson despite him drawing constant double coverage. Henceforth, when shitty teams gather, the 2008 Lions will be mentioned in hushed tones of reverence.

Predictably there was a lot of overhaul in the Motor City, which began in earnest with last year’s trading of Williams to Dallas and continued this offseason. Among the departed are Leigh Bodden, Jon Kitna, Brian Kelly, Shaun McDonald, Rudi Johnson and Paris Lenon. To their credit, the Lions realized there isn’t a quick fix for this club and bypassed the big-ticket free agents to bring in some solid second-tier talent like Bryant Johnson, Ronald Curry, Larry Foote and Phillip Buchanon. They also acquired Julian Peterson from Seattle to upgrade their pass rush. While there’s clearly nowhere to go but up for the Lions, it’s hard to imagine them finishing anywhere but the NFC North cellar in 2009.

Drafting in the top 10 for the seventh time in eight years, the Lions used the No. 1 overall pick to select University of Georgia quarterback Matthew Stafford. They then used the first-round pick obtained from Dallas to nab Brandon Pettigrew, considered the top tight end in the draft. Derrick Williams, a third-round wideout from Penn State, should also have a chance to contribute immediately.

The $78 million question is when does Detroit turn the offense over to Stafford? Well, while the safe money still says Daunte Culpepper starts in Week One, the Lions have no realistic shot at the playoffs, so the temptation exists to get Stafford on the field quickly. From a Fantasy perspective it doesn’t much matter. On one hand, Culpepper hasn’t been worth a roster spot since 2005 and is essentially a lame duck to the point that nothing short of phenomenal play will keep him in the lineup for long. On the other hand, Stafford will be in for some growing pains once he gets the call as Detroit lacks the powerful running game and quality defense that allowed the likes of Matt Ryan and Joe Flacco to succeed. Ignore them both in standard leagues, but stash Stafford in keeper formats.

If there was another bright spot offensively for the Lions in 2008 it was then-rookie Kevin Smith, who ran for 976 yards and eight touchdowns despite having Johnson around siphoning his touches. Smith also finished second on the team in receptions (39), which could be good news for Fantasy owners as young quarterbacks often check down to their backs and tight ends. With Johnson gone, newcomer Maurice Morris should serve as the team’s top reserve. Morris, who has averaged 734 total yards per year the past three seasons, offers solid depth and can be effective as an occasional starter should Smith succumb to injury. Look for a significant bump in touches for Smith in 2009 (he had 277 last year) and view him as a mid-range No. 2 Fantasy back with some upside, particularly in point-per-reception leagues. As for Morris, he’s nothing more than roster filler.

Johnson was a beast last season, hauling in 78 passes for 1,331 yards and 12 touchdowns. All of which was done with little to no help on the other side. To remedy that, the Lions brought in several veteran free agents (B. Johnson, Curry and Dennis Northcutt) and selected Williams. Of that group, Johnson, a former first-round selection himself, is the best short-term option, though after six NFL seasons you pretty much know what you’re going to get from him: 35-to-50 grabs, 450-to-550 yards and a few TDs. Curry was once considered a receiver on the rise, but he’s 30 years old now and is coming off a terrible 2008 performance. Don’t expect a huge resurgence from him. Northcutt and Williams should round out the unit. Despite some uninspiring options surrounding Johnson, he’s simply too talented not to be taken in the first two rounds as a strong No. 1 Fantasy wideout. No one else is worth drafting in standard leagues, though the “other” Johnson could find a late-round home in deeper setups.

Pettigrew should be the immediate starter and because of his blocking skills can be a three-down player as a rookie. Like Smith, Pettigrew should operate as a safety valve, particularly once Stafford gets on the field. He’s not starting material yet, but he’s a quality addition for those playing in keeper leagues and could hold value as a reserve in deep single-year formats.

The Lions had the absolute worst defense in football last year, allowing a laughable 32.3 points and 404.4 total yards (including 172.1 on the ground) per game. Their pass rush was acceptable, but they forced just 20 turnovers, including a league-low four interceptions. Also, despite registering 104 combined returns (83 on kickoffs), their special teams never scored a touchdown. An absolute disaster all the way around — avoid this unit at all costs.

By Herija Green
This entry was posted on Tuesday, July 14th, 2009 at 10:32 pm and is filed under 2009 RotoRob NFL Draft Kit, FOOTBALL, Herija Green, Team report. You can follow any responses to this entry through the RSS 2.0 feed. You can leave a response, or trackback from your own site.