Saving Grace: Wood on the Way Out? 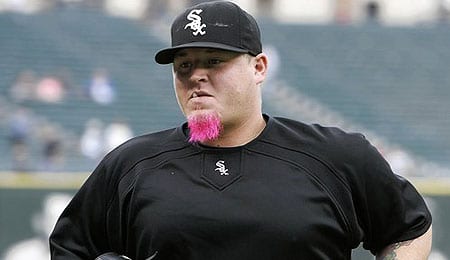 Could the Sox be thinking about dealing Bobby Jenks and his pink goatee and man boobs?

It’s the All-Star Break, and we’re back with another AL version of Saving Grace, to help you get your bullpen ready for the second half.

Bobby Jenks has given up earned runs in his last two outings and got the save in one of them. He’s definitely be shaky in July and hasn’t looked as sharp since a great start to the year as home runs have been an issue. Tony Pena has joined the White Sox bullpen, and while he isn’t likely to threaten Jenks’ job in the Windy City, his presence may mean the Sox are going to shop Jenks and his big salary. If that happens, Pena or Octavio Dotel would likely take over as the closer. Pena got through his first appearance in Pale Hose without too much drama, but he got burned bad in his second outing. Don’t rush out to pick him up in an AL-only league, but do pay attention to this situation.

In his last opportunity, Kerry Wood gave up a two-run homer, but still notched the save. His ERA is in the low 5s and there are rumours flying that the Indians would love to move him. That said, Wood’s salary is probably a little more than most teams are willing to take on at this point. As a whole, the Indian bullpen has been a disaster zone this year, as control problems have led this outfit to the worst ERA in the AL. Because of the unreliable set-up options, Wood isn’t getting enough save chances, and in some shallower leagues, he’s been getting kicked to the corner. On the plus side, his relatively low workload should ensure that Wood remains healthy in the second half, despite his gruesome injury history.

It’s worth noting that Rafael Betancourt was activated from the DL last week and has pitched a pair of shutout innings since then, earning one hold in the process. Betancourt had an ugly start to his 2009, but was coming around before he got hurt. All things considered, Betancourt is probably the Tribe’s most effective reliever, so he stands to gain the most should Wood get dispatched. Go ahead and add Betancourt in an AL-only league — especially those that count holds.

Since the last time we checked in on the AL, Fernando Rodney has had some mixed results, giving up three earned runs and taking a loss, but also notching two saves. His ERA is hovering just below 4.00 — almost a full run below last season. Rodney’s done nothing too bad to lose his job (hell, he still hasn’t even blown a save), but Brandon Lyon has come on strong lately and might be an option if Rodney totally implodes. The fact is, however, the Rodney has finally overcome his health woes of recent seasons, and he’s getting the job done as Tiger closer. I expect him to keep the gig for the rest of the season if he’s healthy. One thing I really like about Lyon, however: this righty has dominated left-handed hitters to the tune of a .220 BAA. He’s never been harder to hit in his career.

Still with the Tiger pen, has anyone noticed that situational lefty Bobby Seay has hurled 20 straight scoreless outings? Just saying…

It’s been a tale of two seasons for Brian Fuentes. After a horrible first two months of the season, he has been money since May, failing to yield a single run since then. Consider Fuentes as safe as they come right now, and his recent work has earned him a selection by manager Joe Maddon as a reserve to the AL All-Star team. Fuentes, who will be 34 next month, has seen his workload decreased from recent seasons, and right now, that’s working well for him. Justin Speier, meanwhile, got ripped in his last outing, and is seriously struggling in July after such a fine June. There’s no reason to own him now, unless you’re in one of those ridiculously deep AL-only leagues.

David Aardsma had a major hiccup on July 8 as he allowed five runs (three earned) without recording an out to take the loss against Baltimore. But he came back to record two saves without incident so chalk it up to just a minor setback. Besides, Aaardsma was flawless in June, so he’s earned himself some slack. Pick him up in mixed leagues where he’s still available — he’s been one of the most pleasant surprises in the game this season.

Former struggling closer turned started Brandon Morrow got sent down to the minors. It will be interesting to see whether Morrow’s future lies in the rotation or in the pen. Either way, what he really needs to do is improve his control and develop his offspeed stuff.

Mark Lowe hit a bit of snag earlier this month, but he’s been good enough in a set-up role to earn consideration in larger AL-only leagues. He’s seeing plenty of work this year, and has made very nice improvements in this, his second full season of health in the bigs.

Dan Wheeler picked up his first save of the season last week, but don’t read too much into that, especially since he’s been scored on in his last outings, suffering a loss and blown save since. J.P. Howell had pitched 2 2/3 innings of that over the previous two days and wasn’t available. Even though he got hammered in his last outing, Howell still looks like the best bet in Tampa Bay pen barring a trade.

Frank Francisco has reclaimed the closer position from C.J. Wilson, but he’s had mixed results in recording three saves in July, having also surrendered four earned runs in six innings. For the most part, his control is vastly improved this season, but three walks in six innings this month is cause for concern. Wilson had a disastrous outing on July 9 giving up three earned runs to take the loss, but beyond that, he’s been steady. This situation is far from over as the Rangers have two guys that have proven they can do the job. Don’t give up on Wilson just yet.

Down on the farm, keep an eye out for Neftali Feliz. The Rangers may promote this uber prospect and use him as a righty power set-up man in the second half.

How quickly things change. Scott Downs was activated from the disabled list and former closer B.J. Ryan was sent packing. Downs, who has the second best K/BB ratio in baseball, jumps right back into the closer role, kept warm by Jason Frasor. Downs was solid before hitting the DL and as long as he’s healthy there’s no reason to think he can’t continue to get the job done.

By Todd Habiger
This entry was posted on Monday, July 13th, 2009 at 2:45 pm and is filed under BASEBALL, Saving Grace, Todd Habiger. You can follow any responses to this entry through the RSS 2.0 feed. You can leave a response, or trackback from your own site.