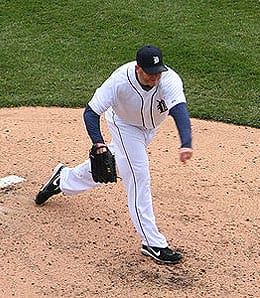 Take away an ugly May, and Bobby Seay has been almost untouchable.

Most teams are now halfway through the 2009 baseball season, despite what the All-Star Game will have you believe. So now is a great time to take a look at some of the division leaders and check in on their chances of staying the course.

The Detroit Tigers haven’t been playing great lately, and with losses in two of the final three games of their huge weekend set against the Twins, they’ve got to be feeling the heat now. Both Minny and the White Sox have been charging hard lately, pulling within two and two and a half games of Detroit, respectively. The AL Central is suddenly as tight as the economy, but in this case, it’s actually setting up for an exciting situation. The second half is going to be one of those sweet, drag-’em-out, last-man standing kind of thingies. Sweet.

With the Tigers’ starting pitching as good as it’s been, most fingers are pointing at the team’s offense when looking at the problems facing this club. And although the bullpen has improved from last season’s disaster, it’s still a concern. Yes, closer Fernando Rodney has been perfect in save chances, but he doesn’t exactly do it seamlessly, having been easier to hit this season; Joel Zumaya has been tough to hit, but has struggled to rediscover his pre-Guitar Hero days; Brandon Lyon has been awfully inconsistent this year, looking brilliant in June, but getting touched up a bit lately and giving up slightly more long balls this year; Zach Miner has also given up too many long balls and got hammered Friday; Freddy Dolsi, called up to replace the struggling Ryan Perry, has looked very sharp, but has now been scored on in back-to-back outings.

I really like what I’m seeing out of Bobby Seay, the lone lefty in the pen until Fu-Te Ni was recently called up. Seay did allow the tying run to score Saturday, as the bullpen blew a late lead for the Tigers, but he was not charged with a run allowed and has now worked 17 straight “scoreless” outings, dating back to late-May. May was a seriously ugly month for Seay, but believe or not, he hasn’t given up a run in any other month this season.

Seay’s been used more as a lefty specialist this season, and filled the role very well, but as a result, his innings are down. However, given that righties haven’t been able to hit him, I’m not sure why he’s not seeing more work against them. He’s never been harder to hit, so could definitely help you in a deeper AL-only league.

As mentioned, the rookie Perry struggled badly last month, prompting the Tigers to send him down to the minors to work on his slider and his command. In Detroit, the rookie averaged almost a K per inning, and enjoyed good hit rates, but his control was problematic. Clearly, Perry showed enough promise as a set-up man that he’ll be a factor in the second half; in fact, we recently identified him as someone to watch in the Tiger pen.

To his credit, Perry has gone down to Triple-A Toledo and shown much better command. In five appearances – three of which have been two innings (obviously, Detroit wants to get him a lot of work and get him back ASAP) – he’s striking out two batters to every walk – a rate which will bring him big-time success if he’s able to maintain it in the majors.

There’s very little point in owning Perry in any redraft leagues until he returns to Motown, but he’s a perfect player to tuck away on your keeper league team.

By RotoRob
This entry was posted on Monday, July 6th, 2009 at 11:05 am and is filed under BASEBALL, RotoRob, Team report. You can follow any responses to this entry through the RSS 2.0 feed. You can leave a response, or trackback from your own site.