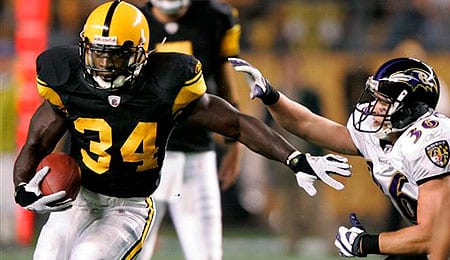 A healthy Rashard Mendenhall should provide a big boost to the Steeler running game this season.

Happy weekend, everybody! We’ve got more of the 2009 RotoRob NFL Draft Kit for you today with yet another team preview (we’re now exactly halfway through these puppies). We’re going to try to shoot out all these team previews and then start releasing the kit’s other goodies (cheat sheets, sleepers/busts lists, etc.). While you ponder how busy Roger Goodell is monitoring his players these days — now he’s putting Plaxico Burress under the microscope — you can find out about the Pittsburgh Steelers’ chances of winning back-to-back Super Bowls.

Oh, just a little thing called the Super Bowl. The Steelers reigned supreme again, topping the Cardinals in one of the most thrilling Super Bowls ever. Ben Roethlisberger willed the Steelers to some early wins playing on guts alone while he was hurt. The 2008 Steelers had a little bit of Steel Curtain in them as they led the league in total defense.

This team took a pounding last year with Roethlisberger hurting early and Willie Parker and Rashard Mendenhall each missing time. Roethlisberger in particular was roughed up by 46 sacks as a porous offensive line couldn’t’ keep defenses off his back. The offense was middling, ranking near in the bottom half of the league in most categories.

The Steelers spent their offseason taking care of some of their own, signing NFL Defensive Player of the Years James Harrison and team leader Hines Ward to long-term extensions and re-signed valuable back-up quarterback Charlie Batch, who was an unrestricted free agent, but is in danger of slipping on the depth chart this season. The Steelers typically don’t make a big splash in the free agent market, preferring to build from within and this offseason followed that trend.

The Steelers used their first two picks on both sides of the line, taking DT Evander Hood (expected to man the No. 3 defensive end slot) in the first round and OT Kraig Urbik (considered someone who could surprise) in the third, with a pick they got from the Broncos. Unfortunately, neither of them have signed as of yet. WR Mike Wallace, the second of three third-round picks Pittsburgh had, is a speed demon who could see some time in three- and four-receiver sets to stretch the field, especially if Limas Sweed continues to struggle.

Roethlisberger performed like a warrior last year, playing hurt and willing the team to victory on a few occasions. While he’s a proven winner in the NFL, his Fantasy stats leave a lot to be desired as he could only muster 17 TDs after tossing for nearly twice that number in 2007. Batch, who the team obviously thinks a lot of considering he’s been their back-up QB since 2002, returns to once again play understudy to Roethlisberger. However, not only is Batch coming off a broken collarbone which cost him the entire 2008 season, but he’s facing stiff competition from youngster Dennis Dixon, who has been impressive enough in off-season camps that he could steal the back-up job.

Parker missed five games last season and could only manage 791 yards as he battled knee injuries. With a broken leg ending his 2007 early, one has to wonder about his ability to hold up under the pounding of the NFL. Mendenhall should be in line for a bigger part of the offense this year. His rookie season was interrupted by a vicious Ray Lewis hit. Still, when he was healthy, Mendenhall didn’t exactly set the world on fire. The return to health of these front two should provide a major boost to a Pittsburgh running game that was near the bottom of the league. Mewelde Moore did an admirable job filling in for Parker, but he’s merely a backup and should only be looked at in the deepest of leagues.

Ward continues to be one of the best receivers in the game, showing no signs of slowing down despite his advancing age. His 81 catchers for 1,043 yards and seven TDs ranked him among the top of all receivers. He’s also an asset in the running game as one of the best blocking receivers in the game. Super Bowl MVP Santonio Holmes proved to be a fine second option with a career-high 55 catches for 821 yards and five TDs. Don’t be shocked if by season’s end he is the team’s primary target. Rookie Wallace should see some time in three-receiver sets, but won’t make much of an impact Fantasy-wise.

Heath Miller doesn’t put up the spectacular numbers, but he’s solid as far as tight ends go. He’s a good blocker, so he’ll see plenty of time on the field and catch the occasional ball. If nothing else, you have to expect Miller to be motivated, entering the final season of his contract.

They don’t call it the Steel Curtain for nothing. Okay, so these aren’t the same guys that dominated the ’70s, but I’m sure that group wouldn’t mind giving a little rub to last year’s group. All the 2008 Steelers did was lead the league in total defense. Led by OLB Harrison and ball-hawking safety Troy Polamalu, the Steelers gave up only 13.9 points per game — almost a point and a half lower than any other NFL team. They ranked first against the pass and second against the rush – not too shabby. The Steelers were also stingy on punt and kickoff returns, ranking in the top five in yards allowed, so they didn’t beat themselves on too many occasions.

By Todd Habiger
Tags: 2009 NFL Draft Kit
This entry was posted on Saturday, June 27th, 2009 at 1:43 pm and is filed under 2009 RotoRob NFL Draft Kit, FOOTBALL, Team report, Todd Habiger. You can follow any responses to this entry through the RSS 2.0 feed. Both comments and pings are currently closed.