The Wire Troll: One for the Birds 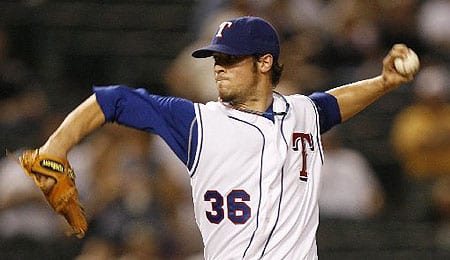 It’s that time of the year when we look ahead to the start of interleague play, a rather contentious topic in the world of baseball. For those of us playing in deeper and daily transaction leagues, it undoubtedly offers opportunities for at bats from those fourth outfielders and role players in the NL. And considering that over the long haul every at bat can make a difference, if you have the roster space, grabbing some of those potential designated hitters would be a prudent move.

C.J. Wilson, Texas Rangers, RP: The Rangers finally moved Frank Francisco to the DL Saturday with biceps tendonitis. After suffering through the day-to-day crap since Francisco’s last appearance May 6, owners can finally make some moves to bolster their bullpens. In the interim it appears that former closer Wilson has the job. He’s performed the task in the past, saving 36 games over the past two seasons, and has managed a win and two saves in his last three appearances. If your fantasy team is in need of short-term save opportunities, get him rostered immediately.

Mat Gamel, Milwaukee Brewers, 3B: The kid can hit, of that there is no doubt. His fielding prowess would be another issue as illustrated by those eight errors at Triple-A Nashville. The Brewers have three games coming up next weekend against the Twins so expect Gamel to have a busy weekend at DH. After next weekend there is a three-week break until the June 12-25 set of interleague games so there is a possibility that Gamel will head back to Nashville in between those stretches. Unless Bill Hall completely loses the ability to hit right handed pitching, the at bats are going to be hard to come by. That being said, the upside potential from Gamel is too high to be ignored and he should be owned in all formats.

Alberto Callaspo, Kansas City Royals, 2B: Callaspo has very quietly been putting together a very solid season for the Royals. Currently, he has two homers, 14 RBI and a stellar .339 BA. He is also available in just about every format. If Callaspo continues to play at this level, Trey Hillman is going to have an interesting decision to make when Alex Gordon returns from the DL towards the end of June. Callaspo is a solid add in all formats, but keep the potential playing time issues filed away for down the road.

Nick Johnson, Washington Nationals, 1B: Johnson can hit, get on base, and be a solid producer for both the Nationals and your fantasy squad. The one thing that he’s never had much success at is staying healthy. In his past 10 games Nick the Stick has put together a nice little run, hitting to the tune of a .350 BA with one homer, 13 RBI, and seven runs scored. Enjoy the respite from the DL and get him active in all formats.

Koji Uehara, Baltimore Orioles, SP: The key to Uehara’s success has always been the ability to limit the free passes, and thus far he has managed to transition to North America very well in that area. He currently sports a 4.01 ERA and 1.13 WHIP with 32 strikeouts and only seven walks in 42 2/3 IP. As long as he manages to keep the walks down he will be a solid starter for both the Orioles and your fantasy squad. He should be owned in all formats at this time.

Chris Tillman, Baltimore Orioles, SP: The 21-year-old Tillman is off to a stellar start for the Triple-A Norfolk Tides. Currently, he’s 4-0 with a 2.03 ERA and 37 strikeouts in only 31 IP. He is the future “ace” of the starting rotation (although Brian Matusz isn’t far behind him) and the Orioles have insisted they’re not going to rush him, wanting him to put in a full season in the minors. It is going to be very difficult for B-More to hold true to its word if Tillman continues to produce at this current level. He should be owned in all keeper formats and on the radar in redraft leagues in the event he does get called up.

Nolan Reimold, Baltimore Orioles, OF: The Orioles are assembling some of the best young talent in the game today (no, that’s not a typo). The latest of this cadre of talent to get the call is the 25-year-old Reimold. At Triple-A Norfolk this year he hit nine homers with 27 RBI, chalked up six stolen bases and hit an incredible .394 BA. Posting numbers of that caliber would guarantee he wasn’t called up to languish on the bench. Adam Jones is currently dealing with a cranky hammy and Luke Scott is on the DL, so the playing time opportunities will be there, making Reimold a solid addition in all formats.

Rich Hill, Baltimore Orioles, SP: The Orioles activated Hill from the DL Saturday and in his first start of 2009 he put together a solid effort. In 5 2/3 IP, he allowed two earned runs, struck out six and only walked two — a great sign, as control has been his nemesis in the past. His next start is against the Nationals’ Daniel Cabrera and one couldn’t want a better opportunity. With his high strikeout potential, Hill is definitely going to be very high on the list of many Fantasy teams so grab him quick before he’s gone.

John Baker, Florida Marlins, C: Baker is currently proving that 2008 campaign in limited at bats was no fluke. What I find very surprising is that he is currently only rostered on 52 per cent of the teams playing over at CBS. Baker has managed five homers, 17 RBI and 23 runs scored, to go along with a decent .277 BA. If he’s currently available in your league, grab him now before someone else does.

David Huff, Cleveland Indians, SP: The Indians are terrible and both the starting pitching and relief corps are good reasons for their abysmal record. When Carl Pavano is your number two man it speaks volumes. The failure and subsequent demotion of Jeremy Sowers leads us to our next candidate, 24-year-old southpaw Huff. He managed to put together a decent record at Triple-A Columbus, albeit the walks were a bit on the high side. Huff is currently worthy of a roster spot in AL-only leagues, but sitting him on your bench for those first couple starts would be advisable.

Gerardo Parra, Arizona Diamondbacks, OF: Parra was called up this past week and had the distinction of being the 100th player in MLB history to homer in his first at bat. He also brings to the table something sorely missing on the Diamondbacks’ roster — the ability to take a walk. Down on the farm he managed three homers, 12 RBI, and seven stolen bases. Yes, this kid can fly. More impressive is the .361 BA and 22 walks with only 13 strikeouts in 108 ABs. The current injury to Conor Jackson and interleague play will undoubtedly allow for playing time opportunities, making Parra a solid acquisition in all formats.

Brett Cecil, Toronto Blue Jays, SP: The 22-year-old southpaw has been an enigma of sorts early on in 2009. Cecil’s record at Triple-A Las Vegas was 0-3 with an 8.31 ERA — not exactly the stuff that makes Fantasy owners drool. However, since being called up he’s 2-0 with 15 strikeouts, a 1.80 ERA, 1.05 WHIP and only four walks in 20 IP. The 2007 first round pick certainly has the potential to be a solid contributor, but as with most young pitchers thrust into the role early, I’d question whether that start is a sustainable one. Cecil should be rostered in AL-only formats and deep keeper formats, but do proceed with some caution. The talent is obviously there, but he’s young and undoubtedly will have his struggles.

By Tim McLeod
This entry was posted on Sunday, May 17th, 2009 at 1:25 pm and is filed under BASEBALL, The Wire Troll, Tim McLeod. You can follow any responses to this entry through the RSS 2.0 feed. You can skip to the end and leave a response. Pinging is currently not allowed.