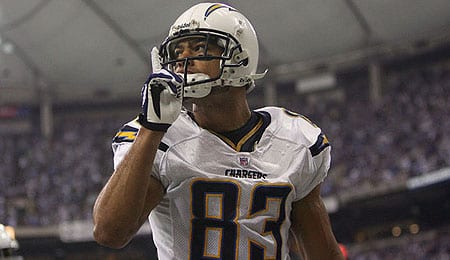 Vincent Jackson enjoyed a breakout season for the Chargers.

We’re back with more of the 2009 RotoRob NFL Draft Kit for you today with yet another team preview (we’re now almost halfway through these puppies). We’re going to try to shoot out all these team previews and then start releasing the kit’s other goodies (cheat sheets, sleepers/busts lists, etc.). While we wonder if Roger Goodell will one day let Michael Vick back into the NFL, let’s consider what it’s going to take for the San Diego Chargers to take it to the next level.

The Bolts won their third straight AFC West crown, pummeling the Broncos in Week 17 to complete an improbable late-season surge to the playoffs. San Diego then upended the streaking Colts during Wild Card Weekend before bowing out to eventual champion Pittsburgh in the Divisional round. Individually, Philip Rivers passed for a career-high 4,009 yards and 34 touchdowns against only 11 interceptions. Vincent Jackson finally broke out as well, hauling in 59 of Rivers’ passes for 1,098 yards and seven touchdowns. Darren Sproles proved he could make an impact outside of special teams, and Antonio Gates fought through injuries to lead the club with eight touchdown grabs.

For the season’s first 13 weeks, one could make a pretty strong argument that the Chargers were the NFL’s most disappointing team. Despite a loaded roster that reached the AFC Championship Game the year before, the Bolts got off to a 4-8 start, and only a weak AFC West allowed them to salvage their season. LaDainian Tomlinson gained only 1,536 yards — a drop from 1,949 in ’07 — and averaged just 3.8 yards per carry, which are disappointing numbers for LT. He was also once again forced to the sidelines due to injury in the postseason. San Diego’s defense nosedived after a dominant 2007 effort, dropping from 42 sacks to 28 and a league-best 48 takeaways to 24. Clearly that group missed the presence of Shawne Merriman, who played in just one game last year because of a knee injury.

The Chargers were little more than bystanders during the offseason, losing only one player of note (Igor Olshansky) and doing virtually nothing in free agency. They did slap the franchise tag on Sproles and renegotiated Tomlinson’s contract, but otherwise the Bolts stood pat; obviously they feel their talent level is closer to what they showed in 2006 and 2007 as opposed to last season. Given the overall state of the AFC West, the Chargers are the prohibitive favourites to “four-peat” as division champs, but their window of opportunity to reach a Super Bowl is closing rapidly. If they don’t make it this season it may be time to do some retooling.

Those looking for impact Fantasy players coming from San Diego’s draft will be disappointed as the club spent its first four selections on the offensive and defensive lines. Larry English, the team’s first-round pick, is cut from the same cloth as Merriman and Shaun Phillips, but he appears to be more of a long-term selection as insurance in case “Lights Out” takes his act elsewhere after 2009.

With San Diego’s once-dominant ground attack struggling last year, Rivers proved he was capable of picking up the slack. The NC State product enjoyed easily his best season, setting career highs in completions (312), yards (4,009) and touchdowns (34). Rivers’ demeanor certainly rubs some people the wrong way, but he’s as tough as they come and is becoming a respected leader. Given their druthers, the Chargers would rather pound the ball on the ground, which could push Rivers’ numbers back down towards the 3,200-yard, 22-touchdown range. However, I don’t expect their running game to bounce all the way back to its pre-2008 form, leaving Rivers as a solid mid-range No. 1 quarterback, though a repeat of last year’s production is questionable.

Undoubtedly one of the more interesting questions facing Fantasy owners this season will be when to pull the trigger on selecting Tomlinson — he’s clearly no longer in the Adrian Peterson discussion atop draft boards, but he’s still a mid to late first-round pick. Even in a down year, Tomlinson still amassed 1,536 total yards and a dozen touchdowns. Plus, he remains one of the best receiving backs in the NFL, catching better than 50 passes in each of his eight seasons. Sproles is another interesting case as, despite getting the big money, the 5-foot-6, 181-pounder only accounted for 672 yards and six scores from scrimmage last season — hardly numbers befitting even a No. 3 Fantasy back. His role may increase a bit, but his value lies in his explosiveness, so it’s unlikely the Chargers will up his workload too much, especially since he’s also a dynamic return man. Draft Tomlinson as a solid No. 1 back with Sproles better suited as a No. 4 option and possible handcuff to LT with both men getting a boost in point-per-reception formats. Those looking for a deep sleeper in larger leagues can consider Jacob Hester, who would probably gain the most value from a Tomlinson injury.

A hot “sleeper” entering 2007, Jackson didn’t really awaken until last year, when he averaged 18.6 yards per catch and became one of the game’s better deep threats. He’ll still get shut down at times, however, and his 59 receptions aren’t good enough to rate him as more than a low-end No. 2 or strong No. 3 Fantasy wideout, though he still carries some upside. Opposite Jackson, Chris Chambers struggled badly in his first full season in San Diego. In fact, his line (33-462-5) in 14 games last year was a step down from what he accomplished in 10 contests (35-555-4) the previous season. He’ll turn 31 in August and has been surpassed by Jackson, leaving Chambers as a quality fourth Fantasy wideout. The Bolts also have a pair of young receivers — Malcom Floyd and Craig “Buster” Davis — that have flashed their talent, though neither should be considered draftable at this juncture. Floyd’s size (6-foot-5, 225 pounds) makes him an interesting red zone option. Those in touchdown-only leagues should have him on their radars.

Injuries made things tough on Gates, but he still posted solid numbers (60-704-8) last season. What he lacked was explosiveness — career-low 11.7 yards per reception — which should return this year now that he’s had another full offseason to heal. Expect 70-plus catches, 900-plus yards and around 10 touchdowns in 2009, making Gates a high-end No. 1 tight end.

Talk about going from the penthouse to the outhouse…the Chargers went from being a Fantasy owners’ dream to just another middling unit in 2008. The expected return of Merriman should get the team back on track, and the presence of Sproles gives them a home run threat on special teams. Assuming Merriman is back to normal, look for the pass rush to wreak havoc once again, affording big-play cornerback Antonio Cromartie a chance to force turnovers and take some balls to the house. The Chargers defense can probably be had in the final rounds, and they’re a nice undervalued defense this year that could finish in the top five.

By Herija Green
Tags: 2009 NFL Draft Kit
This entry was posted on Friday, June 26th, 2009 at 11:37 am and is filed under 2009 RotoRob NFL Draft Kit, FOOTBALL, Herija Green, Team report. You can follow any responses to this entry through the RSS 2.0 feed. Both comments and pings are currently closed.