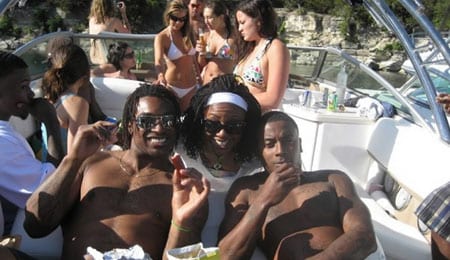 Sure, Cedric Benson (sunglasses) knows how to party, but no one is confusing him for a decent Fantasy running back.

The 2009 RotoRob NFL Draft Kit rages on, with another team preview from Todd. Once we wrap up these team previews, we’re going to start releasing the kit’s other goodies (cheat sheets, sleepers/busts lists, etc.). While we mull the difference in treatment that a rich dude like Donte’ Stallworth receives compared to the sentence you or I would have gotten if we had gotten shit-faced and killed someone, let’s check in on the free-falling Bengals.

Well, they beat the Cowboys in Week Five. Other than that the season pretty much sucked for the Bengals. T.J. Houshmandzadeh caught 92 balls for 904 yards and four TDs. Um, Cedric Benson found someone to take a chance on him. Uh, okay, I’m really struggling here to find positives. Honestly, there were no positives for the Bungles. I think I’ll have more success finding stuff to write about in the next section.

You might want to go get a drink, maybe a bag of chips – this could take a while. For those of you in a hurry, the Reader’s Digest condensed version is: everything went wrong. In a little more detail, we’ll start with Carson Palmer getting hurt and playing only four games. Ryan Fitzpatrick stepped in and showed why he carries a clipboard for a living. The WR formerly know as Chad Johnson was a distraction and dogged his way to 53 catches. Why the Bengals didn’t trade him while he had some value is beyond me. Now he’s worthless. The ground game never got on track. Rudi Johnson got cut and Chris Perry flopped so bad that the team got desperate and signed Benson. Nothing like having two first round RB flops on a team. The offense ranked dead last in the league.

Houshmandzadeh signed a big money deal to catch balls in Seattle while Chad Ochocinco had to stay and honour his contract — both minuses for the Bengals. Laveranues Coles was signed to take the place of the Houshmandzadeh. Tank Johnson and safety Roy Williams were signed to help out the defense.

Hey, here’s a place the Bengals didn’t screw up too much – at least on paper. Andre Smith was taken with the sixth pick of the first round, but lousy workouts and a questionable attitude had him drop from potential first overall pick into Cincy’s lap (so actually this could be a typical Bengal move if he flops – only time will tell.) Linebacker Rey Maualuga fell out of the first round and found the giddy Bengals waiting for him in the second. TE Chase Coffman could be a real steal in the third round. He’s a great pass catcher who could really help Palmer out.

The fate of this team rides on the arm of Palmer. Palmer was injured and ineffective last year and the team’s fortunes went downhill with him. A healthy Palmer can carry this team – but health has to be a big concern. J.T. O’Sullivan was signed in the offseason as Palmer insurance. But as O’Sullivan showed last year in San Francisco, he isn’t a starter.

The ground game is relying on the ever-underachieving Benson. That alone shows you how dismal this unit is. The Bengals traded for Brian Leonard. The former Rutgers star is a cross between a running back and full back. I wouldn’t be surprised to see Leonard wrestle the RB job away from Benson. Leonard is the ultimate unselfish team player and a hard worker – the polar opposite of Benson.

The flamboyant Chad Ochocinco (okay, I’ve written Ochocinco several times and feel like a fool each time – what an idiot) returns for another year of drama for the Bengals. He admitted that he dogged it last year – yeah, we could tell. Coles was signed in the offseason and will probably emerge as the team’s top wideout. Human drop machine Chris Henry and Antonio Chatman should see the field for the Bengals, but you shouldn’t go anywhere near them for your Fantasy team.

Do yourself a favour and pick up Coffman in keeper leagues. The kid is the ultimate receiving tight end and someone I believe could become the next great receiver at this position. He’s not much of a blocker, but who cares — you didn’t read this far to figure out who’s going to be blocking on the end. In leagues where you must have a TE, grab Coffman in later rounds.

The ‘Gals didn’t stink it up on defense the way their offense did, but they weren’t a dominant defense either. They did get to the QB 51 times last year, but that could be a product of being on the field after another three and out by the offense. Shayne Graham is one of the better kickers in the league, but the Bengals impotent offense limited his chances.

By Todd Habiger
This entry was posted on Wednesday, June 17th, 2009 at 1:19 pm and is filed under 2009 RotoRob NFL Draft Kit, FOOTBALL, Team report, Todd Habiger. You can follow any responses to this entry through the RSS 2.0 feed. You can skip to the end and leave a response. Pinging is currently not allowed.