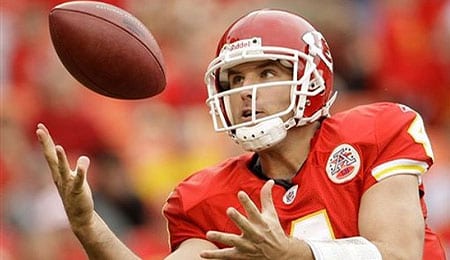 Tyler Thigpen had a nice season, but will no longer be the starter in KC.

We’ve got more of 2009 RotoRob NFL Draft Kit for your reading pleasure and edification today. Once we wrap up these team previews, we’re going to start releasing the kit’s other goodies (cheat sheets, sleepers/busts lists, etc.). We’re a quarter of the way through the team previews, so it won’t be long now.

There’s an old saying, “you can’t polish a turd,” and make no mistake about it, the 2008 Chiefs authored a turd of a season…and not just a regular turd, but the kind you produce after a two-day binge of pounding beer and wolfing down dozens of greasy hot wings. Although it did pick up a pair of divisional wins, Kansas City was unable to build on that. The Chiefs did receive some strong individual performances from Tony Gonzalez and emerging wideout Dwayne Bowe, and even Tyler Thigpen looked solid once they switched to a pseudo-spread offense. Still, it was a season that Chiefs fans can’t put behind themselves quickly enough.

When you lose 14 games, there’s no shortage of fingers to point: the defense was brutal (27.5 PPG allowed, 29th) and the offense wasn’t much better (18.2 PPG, 26th). Brodie Croyle, thought to be the quarterback of the future entering 2008, appeared in just two games due to injury and may never get a sniff of a starting job again. One-time Fantasy stud Larry Johnson authored his second straight sub par year, which included five fumbles in 193 carries – he had just two in 416 carries in 2006.

There was major turnover at every level, including the hiring of longtime Patriot personnel guru Scott Pioli as GM and Todd Haley to replace Herman Edwards as head coach. The Chiefs also continued their rebuilding effort by trading Gonzalez to the Falcons and acquiring Matt Cassel from the Patriots to be their new quarterback. On defense, a pair of veteran linebackers (Zach Thomas and Mike Vrabel) should add some stability while young draft choices like Glenn Dorsey, Brandon Carr and Brandon Flowers continue to develop.

The Chiefs once again focused on the defensive side of the ball in this year’s draft, tabbing LSU’s Tyson Jackson with the third overall pick and Purdue’s Alex Magee in the third round to help solidify a defensive line that failed to pressure the quarterback last year, leading to a league-low 10 sacks – a full seven sacks behind the second-worst club. The only skill position player of note could be Mr. Irrelevant himself, Ryan Succop, who should challenge for the kicking duties.

Thigpen put up decent numbers last year, but he’ll be supplanted by Cassel, who passed for 3,693 yards and 21 touchdowns in relief of Tom Brady. Cassel truly came out of nowhere to become Fantasy relevant last year, but he could be on the road back to nowhere after his off-season relocation. Outside of Bowe, the Chiefs have very little in established receiving talent, which figures to be a culture shock for Cassel, who threw to the likes of Randy Moss, Wes Welker and Kevin Faulk a season ago. He’s an intriguing option to be sure, but one that’s best selected as your reserve.

Johnson’s days as a first-round pick are over, and Jamaal Charles showed enough in limited work last year to earn an expanded role in 2009, which further diminishes Johnson’s value. Johnson is still the best Chief back to own as a weak No. 2 or strong No. 3 contributor, while Charles is more late-round flier material in most leagues as a fifth or sixth back.

When it comes to Kansas City’s receiving corps it’s Bowe…and then everybody else. Bowe hauled in 86 passes for 1,022 yards and seven scores last year, but while the departure of Gonzalez solidifies him as the team’s primary option, it also serves as a double-edged sword since defenses will focus their coverage on him. Mark Bradley is probably the best of the rest, though that isn’t saying much. The sixth-year pro has never played a full 16 games, and his modest 30-380-3 line from 2008 represented career highs across the board. He’s not worth drafting except in very deep leagues, while Bowe ranks as a legitimate No. 2 Fantasy wideout.

Without Gonzalez in the mix, second-year man Brad Cottam is expected to take over as the starter. While physically imposing at 6-foot-7, 269 pounds, Cottam is still very raw and shouldn’t be counted on in any single-year leagues.

Just by virtue of how poorly they performed last year, the Chief defense should be improved in 2009. That being said, it’s hard to imagine them improving to the point of becoming a viable starting option outside of the most advantageous matchups.

By Herija Green
Tags: 2009 NFL Draft Kit
This entry was posted on Tuesday, June 16th, 2009 at 11:08 am and is filed under 2009 RotoRob NFL Draft Kit, FOOTBALL, Herija Green, Team report. You can follow any responses to this entry through the RSS 2.0 feed. Both comments and pings are currently closed.