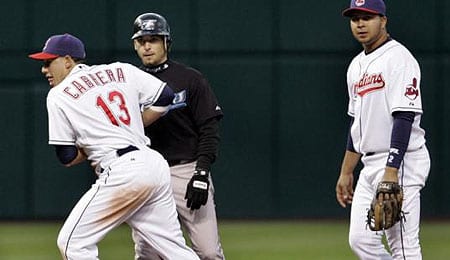 Asdrubal Cabrera has shown great development at the plate, but now he’ll be sidelined for a few weeks.

So you’re an Asdrubal Cabrera owner and you’re wondering what to do after he hit the DL last week with an AC joint sprain in his shoulder. Well, if this is a redraft league, you might simply want to follow the Indians’ lead and plug Jamey Carroll in there – he’s been hitting extremely well in Cabrera’s absence. But if this is a keeper league, now might be the ideal time to play up his great start and the fact that he’s already qualified at both shortstop and second base for 2010 and peddle the 23-year-old to a non-competing and rebuilding team that thinks he’s all that. Try to target a veteran middle infielder like Orlando Hudson or maybe even Michael Young, if you specifically need a shortstop, and play up the age difference. Cabrera has shown great development at the plate this season, but he’s slowing down after his huge April and given that he isn’t drawing as many walks as last season, I suspect his .316 BA will continue to slip over the course of the season, likely winding up around .285-.290. Still, you have to be impressed with the way Cabrera has exceeded expectations through the first couple of months of the season. In the preseason, we ranked as the 22nd-best second baseman, but he’s been playing at a near top 10 level. Play that up, and deal him if you can.

It’s been a very tough start to the season for the Tribe, a team many expected to win the AL Central, but one which currently sits in last place in the division. Yes, injuries have played a role here. In addition to Cabrera’s injury, Cleveland has recently lost reliever Rafael Betancourt and outfielder Grady Sizemore. The Sizemore injury, in particular, is a tough pill to swallow. While his slow start got even worse in May, he was showing signs of life, with hits in six of seven games before the elbow pain finally became unbearable and forced him to the DL a week ago. The greater concern here is what will happen if he’s still undergoing discomfort when he’s eligible to come off the DL in a week’s time. The possibility of surgery has been discussed – and that’s something that could knock Sizemore out until the end of July – which would turn an already awful season into a serious nighmare. In the meantime, we recommended Ben Francisco as the logical replacement for Sizemore, but he hasn’t exactly been tearing it up in the past week (2-for-16 in the past four games), so you might want to seek alternatives.

Victor Martinez’s incredible comeback season continued Sunday with a 2-for-5 performance that included another dinger, giving him hits in six of the last seven games. After a huge April (.386, five homers), he hit .321 with 25 RBI in May. While he’s batting “only” .300 in June, V-Mart has already smacked more long balls than he hit in the entire month of May. Even crazier is the fact that he has five times more homers than he hit in 2008…in 47 less plate appearances. Martinez is enjoying a career year, so small wonder he earned a berth on our early-season Fantasy All-Star team.

By winning two out of three in Chicago against the Sox this weekend, the Indians took a road series for just the second time all year – one of their major problems in the early going. In beating the Sox, they battered a former Indian, Bartolo Colon, as Shin-Soo Choo followed V-Mart’s homer with one of his own – two of the four long balls the Tribe launched off Colon. For Choo, he has now also hit safely in six of his past seven games, and he also drew two walks Sunday as he continues to do a fantastic job of getting on base. Choo hit just .274 in April (although he did steal five bases), but after a .311, four homer, 21 RBI showing in May and continued solid play so far in June, he’s been a popular waiver wire pick in leagues where he is still unowned. You should double check whether Choo is owned in your league; depending on how shallow this league is, there’s a slim chance he’s still available. He shouldn’t be unowned in any league at this point. Choo has finally arrived as a full-time player, and he’s massively exceeded our expectations that he’d be a top 50 outfielder, currently playing more like a top 15 flyhawk. Yet, obviously, given the fact that he may still be out there in some leagues, Choo has flown under the radar to an extent.

One Indian who has been a huge disappoint in the early going has been shortstop Jhonny Peralta. He turned things around in May (.316, one homer, 15 RBI) after an extremely sluggish April (.211, no homers, six RBI, 570 OPS), but he’s gone right back into the tank in June (.136 BA, 481 OPS). And after a very forgettable weekend in Chicago in which he went 0-for-11 (although he did draw a walk and score on Sunday) with a key error in the loss on Saturday, there’s no sign of relief for Peralta owners. The normally durable Peralta has already missed more games this season than all of last year, and while those were not all injury-related absences (he’s just simply been given days off thanks to his ineptitude), he’s really hurting his owners right now. The fact that he has no speed is no surprise, but Peralta is not hitting for either average or power this season, and you’d think with all the injuries Cleveland is currently dealing with, it’s a perfect opportunity for him to step up, but it’s not happening. Surely you expected way more out of the man we ranked as the sixth-best shortstop heading into 2009, but he hasn’t even performed like a top 30 shortstop up to this point. Peralta gained some waiver wire traction after his nice May, but I’d recommend steering clear for the time being until he starts to show some extra-base pop.

By RotoRob
This entry was posted on Monday, June 8th, 2009 at 12:26 pm and is filed under BASEBALL, Fantasy Notes, RotoRob. You can follow any responses to this entry through the RSS 2.0 feed. You can skip to the end and leave a response. Pinging is currently not allowed.