The All Wire Troll Team 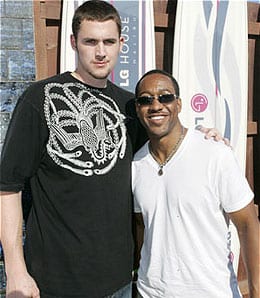 Kevin Love, left, was part of a fantastic draft class.

With the NBA Finals upon us, we here at RotoRob thought it might be a good time to look back at this past season to spotlight just how awesome we were in doling out Fantasy advice by naming the NBA All-Troll Team — these are the guys who weren’t drafted in most leagues, but became reliable contributors by season’s end. So without further ado, here is the All-Troll First Team.

Kevin Love, Minnesota Timberwolves : Love was recommended in our first Troll of the year and would make several additional appearances throughout the season. The rookie averaged 11.1 points and 9.1 rebounds per game and improved as the year progressed, even without Al Jefferson in the fold. After the All-Star break, Love put up 14 points and 9.6 boards per night, though his collegiate passing skills never materialized into assists this year. Still, he isn’t going undrafted in 2009-10.

Joakim Noah, Chicago Bulls: While many may have been largely unfamiliar with Noah’s NBA exploits before Chicago’s much-hyped first-round meeting with the Celts, we here at the Troll talked him up on an almost weekly basis. His overall numbers weren’t great and consistency was an issue, but Noah posted 8.9 points, 9.3 rebounds and 1.3 blocks a game in the second half of the season. He may not be the most popular player on the court, but he proved he can be a valuable late-round asset in drafts.

Jeff Green, Oklahoma City Thunder: Playing in the shadow of Kevin Durant, Green quietly made some serious strides toward becoming a legitimate Fantasy force this season. The Georgetown product was remarkably steady for a 22-year-old, posting nearly identical numbers in the first and second halves of the year. We had him pegged in our second Troll of the year…we know, we know, you’re welcome…and yes, we accept donations.

Ramon Sessions, Milwaukee Bucks: Not exactly an unknown after he posted huge numbers late in the 2007-08 campaign, Sessions inexplicably took a backseat to Luke Ridnour early in the year, ensuring his status on the All-Troll First Team once he started getting more burn. Sessions’ second-half production was strong (13.6 PPG, 4.2 RPG, 7.5 APG), but he clearly has room to grow as teams started sagging off when the Bucks went pick and roll, essentially daring Sessions to beat them with a jumper, which made him less effective. He’ll be an interesting name to watch next year to see if he has improved his long-range game, not to mention where he’ll be playing.

Nate Robinson, New York Knicks: We think it’s safe to say Nate Dogg enjoyed playing in Mike D’Antoni’s up-tempo system as he set career highs across the board. Robinson’s 17.2 points per game were nearly five more per night from his previous best, and he was more aggressive driving to the hoop. His supplementary numbers weren’t great, but when combined with his scoring they were more than enough to warrant 100 per cent ownership for Robinson this upcoming season.

And, with considerably less fanfare, the All-Troll Second Team:

By Herija Green
This entry was posted on Friday, June 5th, 2009 at 3:12 pm and is filed under BASKETBALL, Herija Green, The Wire Troll. You can follow any responses to this entry through the RSS 2.0 feed. You can leave a response, or trackback from your own site.