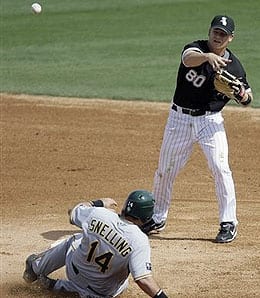 Gordon Beckham will soon be arriving in Chicago — bad news for Josh Fields.

He should already be owned in keeper leagues, but in redraft leagues, it’s almost time to pick up Gordon Beckham, promoted to Triple-A on Wednesday. No. 38 on our most recent top prospect list, Beckham is a player we identified as someone who could move quickly. In fact, you may recall that he almost won the White Sox second base job right out of Spring Training despite the fact he had only played 14 professional games at that point. And now it’s time for the Sox infielders to start looking over their shoulders. Alexei Ramirez seems to have woken up at shortstop after a truly ugly start to 2009, but Chris Getz is slipping badly at second and third baseman Josh Fields – despite a recent hot streak – has struggled all year. Beckham, batting .299 with a .366 OBP and particularly hot recently for Double-A Birmingham since returning from an ab strain, is capable of sending any of these players to the pine, but if I owned Fields, I’d be most concerned about the Beckham’s impending arrival in the South side. Oh, and guess what position Beckham, who was playing shortstop at Double-A, will be manning at Charlotte? That’s right – he’ll be shifted over to the hot corner.

For Fields, meanwhile, that window he had to take over third base from Joe Crede is now shutting. Fields opened a lot of eyes two years ago, when he filled in very capably for an injured Crede, but last season he failed to win the job away from Crede and then languished at Triple-A for most of the season. When the Sox finally called him up, he did nothing. This year, with Crede gone, Fields got the gig by acclimation, and we considering him a good sleeper choice, ranking him No. 23 among third basemen. But since his decent start, he’s been pathetic, recording an OPS of just 475 in May – and that includes a recent hot streak in his last four games in which he went 6-for-16 with a double and three RBI. Fields is doing slightly better than last year, but at this point, he’s not much more than a speed bump for Beckham, and ultimately, Dayan Viciedo. On Wednesday, Fields’ owners got a preview of the future as he was sat in favour of Jayson Nix. You better get used to seeing your dude on the bench, because it’s going to be happening with a lot more frequency soon, and in the very near future, I imagine the transition will be permanent. Nix and Wilson Betemit will be taking more and more of Fields’ PT in the coming weeks, and once Beckham is ready to take the next step – something that may be very soon – it wouldn’t shock me at all if he and Fields merely switch jobs, with Fields taking over the everyday hot corner gig in Charlotte.

Speaking of Betemit, it’s now been 25 days since his last hit. He enjoyed a very nice April, but has been in an awful slump since then. And what’s become of his extra-base pop? Heading into the season, we thought Betemit — who is still just 27, unbelievably — could be one of the best utility players to own, but he’s been pathetic and rather useless so far.

By RotoRob
This entry was posted on Thursday, May 28th, 2009 at 9:31 am and is filed under BASEBALL, Fantasy Notes, RotoRob. You can follow any responses to this entry through the RSS 2.0 feed. You can leave a response, or trackback from your own site.