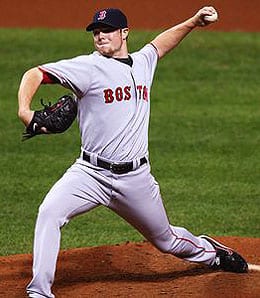 Jon Lester was bringing it Monday, but has been extremely inconsistent this season.

If someone told you that one month into the season, the Red Sox front three of Daisuke Matsuzaka, Josh Beckett and Jon Lester would all be either getting shelled or on the DL, yet the Red Sox would be right there in the AL East, keeping pace with the Blue Jays (?) and holding down the Wild Card, would you have believed it?

That’s exactly what’s happened here, as the Red Sox rotation has been among the worst in the American League, and if not for some superb work from the bullpen and its usual excellent attack, Boston would be in serious trouble.

Matsuzaka was shelled in his two starts and then landed on the DL with a shoulder problem. He’ll be making a rehab start at Triple-A Pawtucket Tuesday night, and that’s great news. The bad news is he’ll be limited to around three innings and 45 to 50 pitches, and is expected to make at least three rehab starts before he’s back in Boston, so owners will be without Dice-K for another couple of weeks or longer.

What do you think the chances are that the Red Sox will let him pitch in the next WBC?

Beckett was brilliant in his first start of the season, but has gotten progressively worse since then. His last two starts have been downright ugly: 9 2/3 IP, 20 hits, 15 runs, three homers, seven walks and 11 strikeouts. Beckett gets a chance to right the ship Tuesday against the Yankees, but that’s going to be easier said than done the way the Bronx Bombers are hitting the ball this season. Beckett can become a free agent after this season, but he’s not exactly setting himself up for a big payday through the early portion of this campaign.

Lester has been the most effective of the three aces, but he’s been anything but consistent. After getting ripped hard in his first two outings, he looked great in back-to-back starts. Then, he took another beating, but Monday night, Lester looked very strong, matching his career high with 10 punchouts. His K/9 has been phenomenal, and his command extremely sharp, but that .290 BAA is not going to get it done.

For Fantasy purposes, obviously you’ve got to hold on to Beckett and especially Lester, but if you’re in a H2H league or have an innings quota to reach, you may have already or may need to temporarily cut Dice-K, as awful as that sounds.

By RotoRob
This entry was posted on Tuesday, May 5th, 2009 at 4:45 pm and is filed under BASEBALL, RotoRob. You can follow any responses to this entry through the RSS 2.0 feed. You can leave a response, or trackback from your own site.