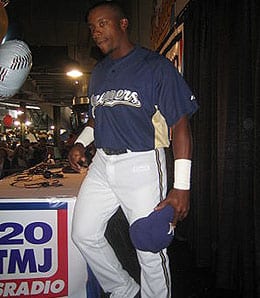 Is this Rickie Weeks’ breakout season?

Is Rickie Weeks finally coming into his own? Considered one of the best pure hitters in college history, everyone expected Weeks to be an instant star. He’s shown flashes, but overall has been a huge disappointment. (As an aside, remember the argument over who should go first overall in the 2003 draft – Weeks or Delmon Young? Uh, maybe neither of them deserved it. Perhaps Nick Markakis, who went seventh, should have been the top pick. But I digress.) At any rate, Weeks is starting to put it together – especially in terms of his extra base pop. After going yard Sunday, he’s now riding a five-game hit streak, and his patience – lacking in the early portion of the season – appears to be returning, with three walks drawn in the past two games. He’s been healthy (so far) as he attempts to finally put together that elusive first 500-at bat season. Weeks has been a good waiver wire pickup lately, and there’s a slim chance he’s still available in a more shallow league. The funny thing is, although we’ve been waiting for his bust out seemingly forever, he’s still just 26. And he’ll turn that magical 27 late in the schedule. We actually started wondering if he was about to be pushed aside if he struggled again this year, possibly giving way to hard-charging Brewer prospect Alcides Escobar, but Weeks is clearly making a statement that he’s not only rebounding from his disappointing 2008, but is perhaps headed for a career year.

Still with the Brew Crew, Milwaukee has really turned things around after a slow start to the season, and the play of Ryan Braun has been a huge reason why. After batting .458 with 12 RBI for the week to help the Brewers go 5-2, he earned himself NL Player of the Week honours. Braun gave his owners a scare last week when he needed an MRI on his back, but he’s bounced back with hits in five straight games since then. The kid’s been pretty durable so far in his career, so I wouldn’t worry about this, and the way he’s hitting this season (.345), I’m starting to wonder if there’s a batting title in Braun’s future. Sure, he had a predictable slide last season after that amazing rookie season, but this year, he’s raising the bar, definitely living up to our pre-season billing as the No. 2 Fantasy outfielder.

By the way, after sweeping last week’s mini series against the Pirates, Milwaukee has now beaten Pittsburgh 17 straight times. You have to go back to 1969-70 to find the last time any team has owned another team for that long a stretch. Call it the Curse of Randall Simon. Payback for Sausagegate is the only logical explanation.

Last season, the only team with a worse offense than the Giants or Nationals was the A’s. Well, while the Giants never even contacted slugger Adam Dunn, the Nats got busy, opening their wallets for him to the tune of $20 million over two years, and considering the difference he’s made, it’s been worth the investment. While San Francisco’s offense has regressed, Washington is suddenly one of the best-hitting teams in the majors. Dunn said recently he expected the Giants to talk him in the offseason, but they never did as apparently they were concerned about his defensive liabilities. So he took his act to Washington and all he’s done since then is mash, starting the year with a big April and getting even hotter since the calendar flipped to May (in his last five games, the NL walk leader has five runs, four homers and eight RBI and has hit safely in six straight). Dunn has yet to steal a base this season, but that really hasn’t been part of his game the past couple of seasons. More importantly, he’s been very durable for several years, and his power this season has been absolutely through the roof as he’s showing early signs of putting up a career year. Man, how good would that big bat look in the middle of the wet-noodle attack that passes for the Giants’ lineup?

Of course another big reason the Nats’ offense is so dramatically improved this year has been a healthy – a simply scorching – Ryan Zimmerman. Monday, he extended his hitting streak to a major-league season-high and Nat record 29 games, and it’s not as if he’s simply getting a dunk single per game – in fact, Zimmerman is 7-for-10 with two homers, a double and five RBI in the last two games. Twice in the past eight games, he’s matched his career high with four hits. His power is really developing and, at the age of 24, there’s plenty of room for growth in that department. Zimmerman’s patience has also rebounded somewhat after the injury-plagued disappointment that was 2008.

After Lastings Milledge was sent down for disciplinary reasons, Elijah Dukes took the CF job in Washington and ran with it, making him a solid waiver wire choice. However, his recent 1-for-16 slump was definitely cause for concern. Dukes broke out somewhat on Monday, going 2-for-5 with a double and RBI, but his early results have been mixed. He’s cut his strikeout rate after whiffing way too often in April, and he’s been quite productive while raising his BA, but Dukes’ OBP and slugging percentages are headed in the wrong direction for such a promising youngster. He’s also not drawing walks like he did last year. On the plus side, any threat that Milledge might have posed – not that he was hitting well in Triple-A – has been temporarily removed after he broke a finger Monday. He’ll examined by a hand specialist on Tuesday after which we’ll have a better indication of how long Milledge will be sidelined. For now, Dukes continues to look like a good bet, especially if his slump is truly over.

By RotoRob
This entry was posted on Tuesday, May 12th, 2009 at 11:50 am and is filed under BASEBALL, Fantasy Notes, RotoRob. You can follow any responses to this entry through the RSS 2.0 feed. You can skip to the end and leave a response. Pinging is currently not allowed.