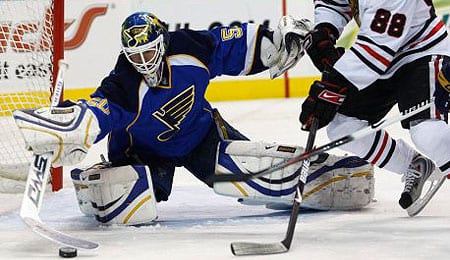 Chris Mason’s play between the pipes has helped spur the Blues into playoff contention.

We’re in the home stretch of the NHL season, and that means that if you’re in a close race for your fantasy team, now’s the time to pull out some magic sleepers. Who’s been under-the-radar hot in the past few weeks? Let’s take a look:

Also, it’s important to note the ultimate bad-assness when it comes to fantasy play. When your buddy is an NHL All-Star, it’s okay to ask him for some fantasy team help, especially if it’s Mike Green. Apparently, one of Green’s buddies told him that he had his childhood friend on his fantasy team. Green’s friend also mentioned that he’d like a few goals to help him catch up in the standings. Green jokingly promised two power play goals — then proceeded to pop in two power play goals that night.

That, my friends, is the definition of “awesome.”

It’s all about key matchups now, isn’t it?

By Mike Chen
This entry was posted on Friday, April 3rd, 2009 at 3:20 pm and is filed under HOCKEY, Ice Chips, Mike Chen. You can follow any responses to this entry through the RSS 2.0 feed. You can leave a response, or trackback from your own site.