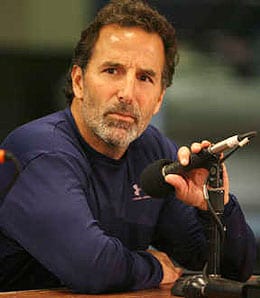 New Ranger coach John Tortorella has managed to get his big guns to produce at last.

How tight are the Western and Eastern playoff races? It seems like the standings change nightly, and that much pressure forces players to perform.

The Rangers spent this week in and out of the playoff bubble, but new coach John Tortorella finally has the team’s big guns going. Scott Gomez, pretty much a fantasy dud all season, has four goals and four assists in his last five games. Chris Drury, also a fantasy disappointment, has two goals and three assists in his last five games. Obviously, these aren’t sick numbers, but at this point in your fantasy season, it’s a sprint, not a marathon.

Meanwhile, Pittsburgh has stormed its way back into the playoff picture and Bill Guerin, last seen languishing on the bench in Long Island, is finding out that playing on a line with Sidney Crosby does amazing things for your numbers. Guerin has a goal and five assists in his last five games. Compare that to all of January, when Guerin had two goals and three assists. Of course, this raises the issue of whether just about anyone can put up numbers on a line with Crosby. Like, could an enforcer put up these numbers? Could your grandmother? What about a toaster?

If you’re looking for a little more out of your defense, I’m going to suggest Edmonton’s Denis Grebeshkov, who has been quietly and steadily putting up decent numbers, including five assists in his last six games. With Edmonton barely holding onto its playoff position, Grebeshkov, who leads the Oilers with a +10 rating, might find himself taking more chances to help the Oilers put up some goals. Of course, that could end up killing his +/-. But for now, I’m really enjoying the cut of his jib. And slow and steady production is better than nothing at all.

Finally, a lot of Flyer-watchers have been bummed about the dramatic slowdown in the Jeff Carter–Joffrey Lupul–Scott Hartnell line. Things might be clicking again, though, as Hartnell put up two goals and two assists Tuesday night against Buffalo. Lupul had two assists and Carter had two goals. That’s pretty hot. You’re not going to find Carter available in any league, but you might be able to grab Hartnell. And odds are, you can have Lupul if you really believe in him.

By Steven Ovadia
This entry was posted on Friday, March 13th, 2009 at 10:59 am and is filed under HOCKEY, Ice Chips, Steven Ovadia. You can follow any responses to this entry through the RSS 2.0 feed. You can skip to the end and leave a response. Pinging is currently not allowed.