Ryan No Longer an Ugly Duckling 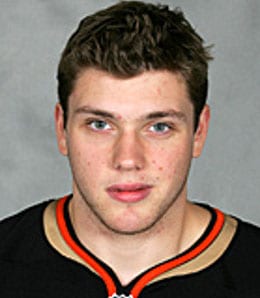 Bobby Ryan looks like a lock as NHL Rookie of the Year.

Pop quiz: who was the second overall pick in the 2005 NHL Entry Draft after Sidney Crosby? How many of you remember that it was Bobby Ryan whom the Anaheim Ducks took with that draft slot?

If you had forgotten that, you wouldn’t be alone and you could certainly be forgiven considering Ryan has spent most of his time as a professional toiling in Portland.

However, it’s not as if the Ducks weren’t high on this kid. In fact, there were a few teams that wanted Ryan added as a throw-in during trade talks, but Anaheim would not part with him. He actually made the team out of training camp this season, but was sent down because of salary cap issues.

However, when Ryan was recalled in late November because of an injury to Francois Beauchemin, the youngster played like he never wanted to see Portland again. And the way things have gone for the odds-on Calder Trophy favourite, Ryan’s not going anywhere for a very long time.

A couple of weeks after his promotion, Ryan had a coming out party when became the first Duck rookie to record a hattrick. Forget about the fact that no Anaheim player had ever recorded a faster hattrick in the 15-year history of the organization; the goal he scored to complete the hattrick was an absolute thing of beauty. Anyone who witnessed that masterpiece was left with the unequivocal knowledge that Bobby Ryan had arrived as a bona fide NHL player.

He caught our eye at the very start of 2009, and we were bang on there as January produced more of the same, with Ryan scoring 11 goals in just 14 games to earn NHL Rookie of the Month honours.

Ryan, who turned 22 last month, hasn’t exactly slowed down. After picking up an assist Tuesday (he also recorded his first NHL fight, a decision he lost to veteran Steve Staois, so was just one goal shy of the Gordie Howe hattrick), Ryan now has two goals and two assists in his last three games. Rookie wall? What’s that?

He leads all rookies in goals (26) and points (51), putting him one point ahead of Chicago’s Kris Vertsteeg for the freshman scoring race. However, given that Ryan has played 13 less games than Versteeg, he’s looking like a lock as Rookie of the Year.

Project out his totals, and you can see how Ryan could be a 40-goal scorer (or more) as soon as next season, a concept Fantasy owners better wrap their heads around pronto. For instance, how is this dude still unowned in about one-fifth of all leagues?

Ryan has a chance to become one of the best U.S.-born players the NHL has ever seen. He’s a tough kid in a power forward’s body who flashes tremendous skill with the soft hands of a natural scorer.

He recently broke Dustin Penner’s Anaheim record for points by a rookie, and given that Ryan is now playing on the Ducks’ top line with Ryan Getzlaf and Corey Perry, there could be plenty more to come over the final five games of the season. In fact, his play has helped resurrect what looked like a lost season for Anaheim as the Ducks are one of the hottest teams in the West, shooting into a playoff spot and currently holding down a share of seventh place. If Anaheim hangs on and gets to the post-season dance, that should cement Ryan’s Calder Trophy credentials.

By RotoRob
Tags: Bobby Ryan
This entry was posted on Wednesday, April 1st, 2009 at 11:49 am and is filed under HOCKEY, Player profile, RotoRob. You can follow any responses to this entry through the RSS 2.0 feed. Both comments and pings are currently closed.