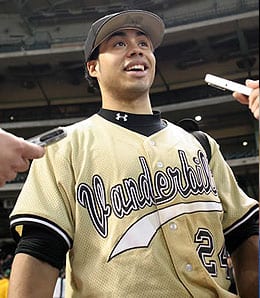 Pedro Alvarez heads a cast of great Pirate hitting prospect, but they won’t arrive in time to save the Bucs from another losing season.

It’s been a couple of years since media prodigy Alex Reimer has had me on his radio show, Without a Curse, but I must have done something right in the past because on Sunday he had me back on to blather on about baseball again.

Our focus was the National League Central, which kind of sucked for me because, as the sport’s largest division, that meant extra work! But hey, it’s not really work — it’s a labour of love. Besides, what the hell would I be doing on a Sunday afternoon if I wasn’t being interviewed? Probably sitting around eating cheese doodles and watching college hoops. Actually, that sounds pretty damn fun. But enough about that, here are some highlights of our discussion (I come in shortly after the four-minute mark if you want to go straight to the interview):

Check out the show here.

By RotoRob
This entry was posted on Monday, March 16th, 2009 at 8:41 pm and is filed under BASEBALL, Podcast, RotoRob. You can follow any responses to this entry through the RSS 2.0 feed. You can leave a response, or trackback from your own site.