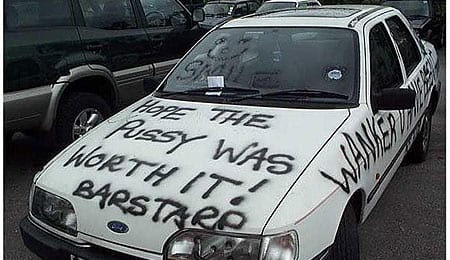 You can cheat on your wife and have this happen to you, or you can play some fantasy hockey. The choice is yours.

Editor’s Note: Maybe your fantasy hockey team is sucking more than a $10 whore. You’re rapidly losing interest (hell, the other day you found yourself listening to women’s diving on the radio for your sports fix), yet there’s still several weeks left in the season. What to do? Hell, screw your current team and head on over to Draftbug.com, where you can dabble in very short fantasy seasons (how about daily leagues?). Don’t forget to tell the dudes at Draftbug.com that RotoRob sent ya. Every time one of our readers signs up for one of their contests, a box of Skittles arrives on our doorstep. Life is good.

Traffic is beginning to increase on Draftbug. It’s likely that within the next few weeks, larger fantasy hockey contests will be available, with six, 10, 20 or more players in each. To succeed in these, you’ll need to keep one important principle in mind: in large tournaments with top heavy payouts, always use a high variance strategy. In other words, it does you no good to play it safe and go for second place in a winner-take-all contest.

This principle applies to all types of contests or tournaments, whether you’re playing fantasy sports, poker, or anything else. However, it’s easier to apply in some arenas than others. Draftbug fantasy hockey may just be the easiest place to profit from it.

One of the best ways to increase variance in your score in any fantasy contest is to pick players whose scores will be highly correlated. Draftbug hockey uses a scoring system that makes this very easy to do. Picking players who play on the same line is one of the keys. Whenever one scores a goal, the others are likely to get assists. Most of the time, they’re either all going to have good games on the same day, which is the key to running up a high enough score to win a large contest with six or more people entered. Additionally, players are rewarded for their plus/minus, which is generally going to correlate well with whether their goalie scores 15 points for winning the game, and also will have some correlation with the goalies’ success at preventing goals.

So the key to winning at Draftbug hockey is pretty simple: as much as possible, pick linemates and their goalie. Draftbug’s hockey scoring system allows such great correlation between picks, that this strategy should make you a consistent long-term winner.

I offer you just two warnings related to this: The first is that high variance only helps you in large tournaments. In a head-to-head contest, you should simply focus on picking the best team you can, without regard to the correlation among your players’ scores. The second warning is that Draftbug does not allow you to pick all your players from the same team. To maintain its status as fantasy sports rather than gambling, anybody who uses an entire team made up of players from the same team needs to be disqualified. So make sure that you mix at least one player from another team into your squad.

By RotoRob
Tags: Draftbug, Fantasy Hockey, fantasy sports, fantasy strategy, HOCKEY, NHL, Skittles
This entry was posted on Sunday, February 22nd, 2009 at 12:51 pm and is filed under Draft strategy, HOCKEY, RotoRob correspondent report. You can follow any responses to this entry through the RSS 2.0 feed. Both comments and pings are currently closed.