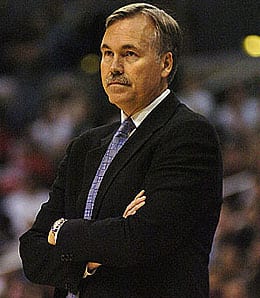 Will Mike D’Antoni give Eddy Curry enough time to make him a fantasy consideration?

Andray Blatche, Washington Wizards: In 14 games as a starter, Blatche is averaging 10.7 points and 6.1 rebounds per game. He’s also a capable shot blocker and can pass pretty well for a big man. He’ll surprise with the occasional double-double, but he’s more of a solid, secondary fantasy centre if you’re in the market.

The Nuggets added Johan Petro in a deal this past Wednesday, and while he did not play Friday – his first game in a Denver uniform – he is someone worth watching in deep leagues. He has long been a solid worker on the glass, so it’s all about him getting enough burn… Eddy Curry made his season debut on Thursday, playing just over two minutes. It’ll be a while before he makes an impact, if he ever does under Mike D’Antoni, but he might be worth rolling the dice on if you’ve got some roster flexibility.

Tyrus Thomas, Chicago Bulls: We keep expounding on the virtues of the versatile Mr. Thomas, and yet he remains available in far too many leagues. Maybe his 15-point, eight-rebound and eight-block performance on January 3 will finally serve as a wakeup call. Thomas has explosive upside and deserves a spot on your roster, even in shallow leagues.

Kevin Love, Minnesota Timberwolves: The rookie has scored 16 or more four times in the team’s last seven games and is doing yeoman’s work on the glass – at least seven rebounds in eight straight. His relatively low minutes are a little worrisome (he has logged more than 26 just once since December 16), but he’s making his time on the court count and is a viable option for those seeking rebounding help.

Linas Kleiza, Denver Nuggets: With Carmelo Anthony out of action with a broken hand, Kleiza has slid into Denver’s starting lineup. He looked great in his first start in place of Melo (21 points, seven boards) but was nearly invisible on Friday night (0-for-6, one point, four rebounds). The Lithuanian is a streaky shooter, but he’s an intriguing option if you’re looking for a boost in points.

An X-factor in the playoffs for the Celtics last year, James Posey is pushing to be an X-factor for fantasy clubs with his recent shooting. The swingman has reached double figures in five of his last seven games and hit multiple threes in five of his last six as well…Nick Collison is back after missing time with a thumb injury and is looking good – he had 17 points and 10 boards in his return and followed that up with eight points and 10 rebounds two nights later. He’s an option…The Lakers’ depth is being tested, which is good news for Trevor Ariza, who stands to see additional run with Lamar Odom (knee) and Luke Walton (toe) out of action. Consider Ariza a possible short-term addition…Nenad Krstic is officially back in the NBA and has accumulated 16 points and eight rebounds in two games since his return. He’ll qualify at both centre and forward, making him potentially solid depth.

Russell Westbrook, Oklahoma City Thunder: The rookie has been a bright spot in an otherwise dreary season for the Thunder, which might be why his all-around contributions have been getting overlooked. Westbrook has reached double figures in 12 straight games and posted his second double-double of the season on Wednesday. He averaged 15.5 points, 5.1 rebounds and 5.1 assists per game in December and is off to an even hotter start in January (16.8 points, 8.0 assists). He should be owned in all formats.

Mardy Collins, Los Angeles Clippers: Alright, stop me if you heard this one; Baron Davis walks into a bar…and bruises his tailbone, forcing him to stay in L.A. as the Clippers head out of town for a three-game road trip. With the oft-injured Davis out of action the past five games, Collins had averaged 12 points, 4.8 rebounds and 5.2 assists per contest in that time. Jason Hart’s return could cut into Collins’ playing time, but he is still a decent short-term alternative.

Josh Howard’s wrist is bothering him again, which could mean more minutes for J.J. Barea, who opened some eyes in early December. He’s more of an option in deep leagues at this point…Raja Bell returned to the lineup on Friday, logging 13 points in 25 minutes off the pine. He doesn’t offer much beyond scoring and three-point shooting so don’t bother unless you’re deficient in those areas…Courtney Lee has started Orlando’s last three games, posting pedestrian numbers in the process – there’s nothing to see here just yet, but keep an eye on him to see if his production picks up in his new role…Since the New Year, Keyon Dooling has averaged nearly 40 minutes per night, posting 12.6 points and 4.8 assists per contest. If he keeps logging that many minutes he’d be worth adding.

By Herija Green
This entry was posted on Sunday, January 11th, 2009 at 8:33 pm and is filed under BASKETBALL, Herija Green, The Wire Troll. You can follow any responses to this entry through the RSS 2.0 feed. You can skip to the end and leave a response. Pinging is currently not allowed.