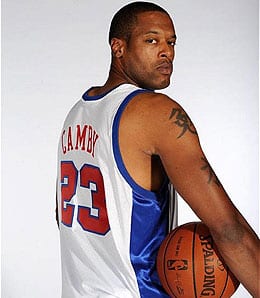 What the hell is wrong with the Los Angeles Clippers? Badly beaten up, and just plain beaten down, this team has nothing to look forward to except the lottery, yet suddenly – in the midst of a brutal seven-game road trip – they decide to go on a run. Saturday, the Clippers absolutely molested the Hawks, just one night after bitchslapping the Grizzlies. Are you trying to hurt your chance at Blake Griffin, people?

Don’t look now, but this two-game winning streak has vaulted the Clippers out of the Western Conference cellar and past the Kings. The Clips finish their road trip Tuesday in Charlotte against the struggling Bobcats before heading home for a date against the Knicks, who have cooled off tremendously. It’s not inconceivable that LA will run the table between now and the All-Star break. And if that’s the case, the Clippers will likely catch the 13th place Thunder, which is also playing decently lately.

Hell, this is a team that had dropped 11 straight games away from Staples Center before Friday. Now, it’s won two in a row without the need for home cooking, improving its road mark to 7-19. And it’s one thing to beat Memphis, but Atlanta? The Hawks haven’t exactly been tearing it up lately, but are still one of the best teams in the Eastern Conference. Get this: the last time the Clippers put together back-to-back wins was December 16 (26 freaking games ago). Break up the Clippers, baby!

One thing that has confused me about this winning streak: where the hell has this shooting been all season for the Clippers? We are talking about the NBA’s worst shooting team, yet they managed to drain 59 per cent against Memphis (a middling defensive team) and sink 49-of-86 (57 per cent) against Atlanta, which isn’t a bad defensive team either. Saturday, Marcus Camby drained 6-of-7 for the second time in three games; Al Thornton continued his recent hot streak by canning 13-of-22; Ricky Davis, who has also found his stroke the past couple of games, nailed 4-of-7 off the bench. Charlotte isn’t quite as good defensively as the Hawks, so maybe we’ll see more of this on Tuesday.

Could Davis be worth a pickup now? He scored a dozen points Saturday (thanks to four 3-pointers) while adding three assists, two rebounds and a steal. Buckets has been an awful disappointment this season, and a knee injury last month didn’t help matters, but he’s now reached double digits in scoring in back-to-back games, providing the Clipper second unit with a much-needed offensive kick in the ass. Davis is starting to see more PT, and if he is regularly receiving 25 minutes or more (and can shoot nearly as well as he has been lately), he can definitely provide a boost for your squad, especially if his outside game – a major bust so far this season – is coming around (and 10 treys in two games suggests it is). It’s worth noting that much of Davis’ production has come in the back-to-back blowout wins, and he might have gotten more burn than normal as a result, yet he’s done enough to deserve extra PT as the sixth man, so see if his minutes remain high in closer games.

Before we scoff at the Clippers’ sudden success, remember that they are almost finally back to full strength after a season-long battle with health issues. The only significant member of the rotation still missing is Chris Kaman, a thorn in my side, and I’m sure plenty of other fantasy owners. The latest report on Kaman still has him on track to return after the All-Star break, leaving us no choice but to be patient. If you’ve held him this long, what the hell else can you do? Pick up JaVale McGee off the wire? Oh wait, I already did that once I learned that Andrew Bogut’s back was conspiring against my team.

You think Zach Randolph is enjoying life back on the West Coast? In 80 games with the Knicks last season and this season, he never once scored 30 points in a game. Yet, despite his injuries, he’s done it five times in just 18 games as a Clipper. We’ll see what happens when (if) Kaman returns, but for now Z-Bo is a scoring machine.

Back when we recommended him as a wire pickup in November, we suggested that Eric Gordon would experience the normal rookie ups and downs. For the most part, he’s been quite steady, but the return of Randolph has definitely affected Gordon’s touches, as he’s taking an average of six shots less per game so far this month. Hope you sold high when you could. Don’t get me wrong. The kid is still valuable (especially if he keeps shooting as well as he has lately), but Gordon won’t be carrying the team offensively the way he did in January, when he put himself in the thick of the ROY race by averaging 21.9 PPG.