The Wire Troll: A Rookie Emerges from the Swamp 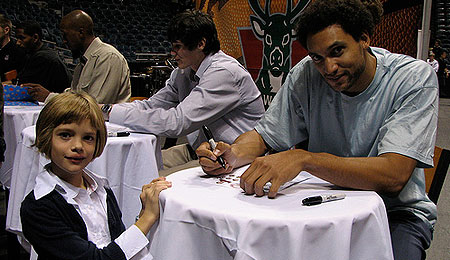 For now, Dan Gadzuric (yes, he’s the one on the right, believe it or not) is gaining in popularity while he’s starting for the injured Andrew Bogut.

Herija remains sidelined this week, so RotoRob is back for one more Wire Troll session. We hope all our American readers had a wonderful Thanksgiving, and while you’re busy digesting that last piece of pumpkin pie, we’ll take a look around the hardwood floors to see who’s been excelling with a different kind of pumpkin in their hands.

Yes, that was Darko Milicic making a start Monday for the Grizzlies, and he once again teased us with his talent (scoring his first double-double of the season with 11 points, 11 boards, two steals, two blocks and an assist). But on Wednesday, he was back to the bench, and although he scored seven points on 3-of-5 shooting and blocked another shot, he didn’t play enough minutes to reward anyone who picked him up. However, on Friday he was back in the starting lineup and played 31 minutes, shooting well (5-for-8) while putting up 11 points, six rebounds and a block. Unfortunately, he came off the bench again on Saturday and did next to nothing in 16 minutes of action. Yes, there’s now talk that Milicic is thinking of going back to Europe after his contract expires in 2010, which clouds his NBA future down the road, but with Memphis trying to find a formula that wins games, Milicic could keep starting regularly. That makes him someone you may want to target.

With Andrew Bogut hurting, Dan Gadzuric has been starting at centre for the Bucks, and while he’s no one’s idea of a stud, he can still help you. Gadzuric got a double double Friday and has recorded five blocks in his last three games. Hell, he even sunk 4-of-4 from the line Friday – pretty impressive for a dude who has barely sunk over 50 per cent of his freebies over a seven-year career.

Chris Wilcox was finally moved into the starting lineup Saturday, and while he kind of sucked, he’s been playing extremely well lately, and the Thunder actually won with him as a starter – and that’s some seriously rare footage. Wilcox had rhymed off four straight games with at least 14 points and five rebounds, so I think he’s worth another look if you cut him (like I did, when he got hurt…d’oh!). The key for Wilcox is to see if he’s getting at least 10 shots off per game. That many or more will make him a fine fantasy option; less than that, and he’s borderline. In the last five games, he’s gotten that many touches three times, so keep an eye on that.

Andray Blatche, who would be far more attractive if he could avoid foul trouble.

New Jersey Rookie Ryan Anderson isn’t getting enough PT to be useful unless you’re in a very deep league, but that could change soon if he keeps putting up statement games like he had on Wednesday. In just 18 minutes, the power forward scored 13 points, pulled down a season-high eight boards and nailed a trio of treys. On Saturday, Anderson got a bit more PT, but his shooting touch went cold (1-for-6 for just six points), however, he did pull down five boards and got a steal. The inconsistent Yi Jianlian (who I picked up because I felt like taking a risk) better look over his shoulder; should Anderson start getting over 20 MPG regularly, you’ll want to think about plucking him off the wire.

Carl Landry was a non factor on Saturday, but he’s been getting significant minutes off the bench and has been producing, with four straight games of at least 11 points before Saturday. Wednesday, he recorded his second double-double of the season after managing just one as a rook. If you’re in a deeper league, Landry is worth a look.

Foul trouble limited Craig Smith on Saturday, and combined with a big game from Kevin Love, that might have really hurt his fantasy outlook, but Smith put up a couple of lines last week that had to get you to at least raise your eyebrow. Still, what intrigues me is that despite playing just 11 minutes Saturday, he got seven shots off; that tells me that Smith’s value could very well be on the rise in a big way as the team integrates him further into the offense.

Kris Humphries had seven boards on Friday and has blocks in consecutive games.

Trevor Ariza filled the stat sheet on Friday, providing a hint of what he could do with the starting gig.

Francisco Garcia is back now, and playing limited minutes, but as his PT creeps up, he’ll need to be owned.

Quentin Richardson is helping is every category except blocks.

Wally Szczerbiak is slowly but surely starting to get enough minutes to be bubbling under the fantasy radar. With Cleveland blowing out its opponents, it’s worth watching his minutes off the bench, and last week he received at least 23 minutes in back-to-back games. Need some help in 3-pointers? Wally World could be your man, especially if he keeps getting more touches as he has in the past few games. It’s also worth considering that he could be trade fodder because of his expiring contract, so it would behoove Cleveland to at least put him on display for any potential trading partners.

Ronnie Brewer has been losing a bit of steam, but considering he’s shooting at a 57.1 per cent clip over the last three games, I’d be holding him. He’s been employing an outside game more this year, and is a tremendous source of steals. Okay, I could see his touches and scoring totals slip a bit as Deron Williams gets fully healthy and begins to dominate the offense more, but I wouldn’t be casting Brewer off unless I was in a fairly tiny league.

Is owning J.R. Smith causing you ulcers yet? After he got a DNP-CD on Wednesday (punishment for all but missing practice earlier in the week), many owners took that as the last straw and cut the dude. So Thursday he goes berserk, nailing five treys on his way to 32 points, five boards, four assists and two steals. Bingo, everyone picks him up again, just in time for him to put up a donut in seven minutes on Saturday. Is Denver tiring of this talented but troublesome guard? As long as he’s playing, you don’t care from a fantasy perspective, but when his ‘tude is cutting his PT, owning Smith is a major headache. The Nuggets play just three games next week, so weigh your options carefully with Smith. You’ve got to ask yourself: “do I feel lucky?” Well, do you, punk?

Tony Allen has reached double digits in points in five of his last six games.

J.J. Redick is getting a chance to prove he’s an NBA player with Mickael Pietrus out for the next three-to-five weeks.

Eric Gordon will frustrate you with his rookie ups and downs, but the job is his and he can score.

Brandon Rush is getting more burn in Indy lately, making him worth a look in a deep league.

Flip Murray is way inconsistent, but if you’re feeling lucky on any given week, try him. It didn’t work for me, but maybe I should have checked the alignment of Jupiter.

It took another Allen Iverson meltdown, but Rodney Stuckey is showing what he can do with more PT.

By RotoRob
This entry was posted on Sunday, November 30th, 2008 at 3:39 pm and is filed under BASKETBALL, RotoRob, The Wire Troll. You can follow any responses to this entry through the RSS 2.0 feed. You can leave a response, or trackback from your own site.