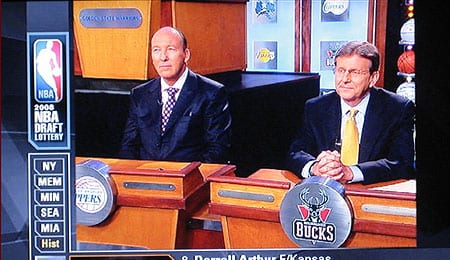 Expect Mike Dunleavy, left, to assume the usual position at the NBA Lottery Draft for the Clippers this summer.

Three seasons ago, the Clippers won 47 games with an exciting young team that not only made the playoffs, but actually finished ahead of the Lakers. Suddenly, the Clips were no longer simply LA’s “other team.” However, that distinction has been seriously short-lived, especially with the Lakers back in championship contention over the past couple of years. Since then, the Clippers have slipped to 40 wins and then just 23 last year. This season, they will be extremely hard-pressed to even reach 20 wins, and a third straight season on the sidelines come playoff time is pretty well assured. Just two teams are scoring fewer points, and the defense – while slightly better this season – is still among the worst in the NBA. They’ve dropped two straight games (including a 25-point bitch slapping at the hands of Portland on Monday), and 16 of their past 18. Simply put, there’s not much hope here. But wait…with the underachieving and currently struggling badly Bulls (winners of just five road games) heading to town Wednesday night, LA has a pretty darned good chance to earn its 11th win of the season. Eight-place Dallas better start looking over its shoulder. Uh…maybe not.

Unfortunately, beating the Bulls at home hasn’t been easy for the Clips – they’ve dropped two of their past three games against Chicago at the Staples Center. Overall, LA has lost its past two games vs. Chicago.

LA actually had a decent chance to win on Monday against a powerful Trail Blazer team. It was down by only four points headed in the final stanza, but didn’t exactly start that fourth quarter like it meant it, with Portland opening up on a 15-3 run and outscoring the Clippers 36-15 for the quarter. Ugh. LA couldn’t defend a thing in that game, with Portland shooting 58 per cent from the field – the highest any opponent has scored against the Clips this season. That’s an area LA has actually been middling at this season, holding opponents to 45.44 per cent for the season, good for 15th in the NBA. If that component of the Clipper game starts to fold, things may get even uglier and they may soon find themselves having an even better chance in the Blake Griffin sweepstakes.

Coach Mike Dunleavy must be ready to pull his hair out. Oh, wait…never mind. Injuries have decimated this team – currently, Marcus Camby, Mardy Collins, Baron Davis, Chris Kaman, Zach Randolph and Mike Taylor are all out. Jason Hart just returned after missing five games with an elbow injury, and Brian Skinner lost a pair of tilts on the weekend because of the flu. But it’s not as if they were kicking ass when healthy. This team jumped out of the gates with an 0-6 record and only got worse from there.

Randolph has been out since late-December with a knee injury. He started the season with the Knicks and was scoring well (20.5 PPG) before a big trade sent him west. After joining the Clips, Z-Bo lost some of his aggressiveness (just 4.5 trips to the line per game), but he was scoring even more and had been playing seriously heavy minutes in the weeks leading up to his injury. Randolph was well on his way to justifying our pre-season pick as a top 15 forward, but the injury has robbed him of his value, and he’s barely in the top 75 now. Fortunately, he’s expected back within the week, so keep your fingers crossed that he’ll be able to bounce back.

Despite missing nine games this season – I guess it was insane to imagine he’d be able to match the career-high 79 games he played in last season – Camby has delivered on our projection as a top 10 centre. He’s been out the past week and half with an ankle injury, and the timing was awful, as Camby was getting more touches than usual with all the wounded Clippers. He’s expected to return some time during the upcoming road trip – great news because the Cambyman was in the midst of a career year, so his owners have to be praying he can avoid another serious injury for the rest of the season. We have our doubts – especially since there’s really nothing to play for this season.

Kaman’s foot injury is one that I have personally been affected by as he was helping to anchor my frontcourt until going down on November 26. You can’t replace a wild Mountain man, and I haven’t given up on him being able to help me bounce back towards a playoff spot, so I’ve hung on to him and sucked up a roster spot for the past two months. Fun! Of course, long-time Kaman owners know that injuries are nothing new. In fact, since playing all 82 as a rook, he’s been unable to avoid injury in the five subsequent seasons. In the early going, Kaman had not been building on his career performance from 2007-08, not a shock considering he had been seeing less action with Camby and Z-Bo in town. There had been plenty of talk that Kaman was on the block – something that would have helped all three players – but the injuries to the entire trio has nixed that for the time being.

Sophomore Al Thornton has been asked grow up real fast, and for the most part, he’s done well in this baptism by fire. His hot January continued on Monday with 23 points and three steals, the third time in the past four tries he’s reached 20 or better. Thornton’s numbers are up virtually across the board this year, and I’m most impressed by the fact he’s turned himself into a block per game man. There’s a chance in a shallower league that he’s available, so take a peek if you’re in one of those mini leagues.

Here’s a Clipper to put on your radar and possibly even scoop up if your league is deep enough: Steve Novak. We’ve always known he’s a tremendous shooter, but getting PT hasn’t been easy for him so far. However, he’s another one who has benefited from all the injuries, playing significant minutes lately, and responding with five straight double-digit scoring efforts. Novak canned five 3-pointers for 21 points in 29 minutes Monday, pitching in with two boards. Don’t look for anything beyond scoring and 3-pointers from this kid, but if that’s where you need help, I’d suggest Novak could be a useful short-term addition.