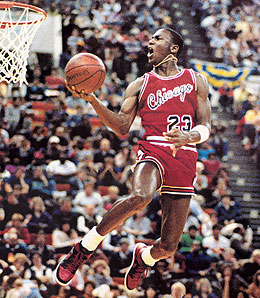 Perhaps Michael Jordan and the 1995-96 Bulls don’t need to be looking over their shoulders.

What’s this? The Boston Celtics have lost back-to-back games? Apparently, some are suffering from a Holiday letdown. After all, after the best 29-game start in NBA history, it was certainly no shame to lose to the Lakers on Christmas Day. But then to go down to the woeful Warriors – and blow a big lead in the process – that was a shocker. Sunday night, Boston looks to put the skids on its 0-for-California excursion with a win in Sacramento. Luckily, the Celtics are catching a Kings team on its way down, having dropped five straight and owner of a pathetic 5-10 record at Arco Arena – once upon a time one of the toughest places to earn a win.

Boston had won a rather silly (and franchise record) 19 straight games before hitting the West Coast. And with a 27-2 start, the Men in Green were well on pace to top the NBA record of 72 wins, set by Michael Jordan’s Chicago Bulls in 1995-96. These losses, however, means Boston is now only on pace for 71 wins. The stiffs.

Of course the real goal here for the Cs is back-to-back NBA Championships. And despite the fact that their first real test — their first road trip longer than three games — has been a disaster so far, there’s certainly no need to think they have spun off track. In fact, I wouldn’t be shocked to see them lay beat-downs on both the Kings tonight and Portland on Tuesday night before heading home to kick off the 2009 portion of their schedule against the pathetic Wizards. Given that they haven’t dropped three straight since right after the All-Star break last year, I’d be extremely surprised if they don’t but the skids on this streak tonight.

As good as Rajon Rondo has been this year, he couldn’t protect the pumpkin to save his life on Friday night against Golden State. He had committed just six turnovers in his previous four games, but he had seven on Friday. Despite the butter fingers, Rondo was one dime shy of recording his second triple-double of the month, so owners will surely suck up the TOs. Rondo’s offense wilted last month, but given more PT and touches in December, he’s picked up the pace and is also dropping a very fine 8.5 dimes per game. Overall, he’s actually shooting less this season, but is doing a better job of drawing fouls and has become a much more efficient scorer. Given that he’s also added 2.5 APG to his average and it’s clear he’s far outshone our pre-season ranking as the 30th best guard. I’d say Rondo is now a top 20 guard – with a bullet.

Believe it or not (yes, there is room for improvement for Boston), turnovers have been a real dilemma for Boston this season. In fact, with an average of 16.5 per game, it ranks dead last in the association. Even so, Friday was ugly. The Celtics coughed it up 23 times, with 14 of those coming in the second half when they self-destructed and allowed the Warriors to dominate. Paul Pierce’s turnovers are up this year (he’s got 15 in the past four games), but he’s also playing a bit more this year, so we’ll cut him some slack. It’s the same situation with Kendrick Perkins. He missed Friday’s game because of his shoulder, but had committed nine turnovers in the previous three games, and – given an extra 4.3 MPG this season – his turnovers are up from 1.6 to 2.4 per game. Rondo’s TOs per game are also up, from 1.9 to 2.4, as he’s playing a bit more so far this season.

Eddie House, really only of value in an extremely deep league, has managed a couple of double-digit scoring games off the bench in his last three tries. I wouldn’t call them efficient efforts – he’s just 8-for-26 (30.8 per cent) from the field over this stretch — but if you need some help with 3-pointers, take note of the fact that he’s averaging 2.1 per game so far in December. His PT may be down a bit this season, but he’s not shy about getting his shot off, with an average of four attempts from beyond the arc. We thought House might get 20 MPG this season, but with Rondo showing great improvement, House’s PT has slipped.

Ray Allen hasn’t looked very sharp in his return to the West Coast. On Christmas, he shot just 5-of-14 (only 3-for-11 from downtown) against the Lakers for 14 points; Friday, he was even worse. Thanks to foul trouble (he ultimately fouled out after playing just 29 minutes), he was limited to a season-worst seven points. Still, I don’t see how his owners can moan much. Allen’s scoring touch has been getting better all season, and despite last week’s hiccup, he’s still averaging 19 PPG in December. Overall, Allen’s bounced back nicely after a rough first season in Boston, justifying my call that he was a value pick this season. By the way, how important has Jesus been to the Celtics this season? Well, when he scores at least 15 points, they are 20-1. When he doesn’t they are just 7-3. Awful, eh?

Remember how I said that Arco is a tough place to win? Well, prior to last season’s win there, Boston had dropped 11 straight in Sacramento’s house. Of course, those weren’t the same Celtics, nor were they the same Kings. Times sure have changed for both of these organizations in the past couple of years.

By the way, Sacramento comes in on a 2-15 run. After showing some promise last season with 38 wins, its 5-8 start this season was bad enough, but now this team is in free-fall mode. Hell, the Kings are behind the Warriors now. That’s bad. Friday, Sacramento blew a half-time lead and allowed the Raptors to look good as it dropped its fifth straight game. And making the Raptors look good is no easy task lately (even though their current Western swing actually could wind up with a .500 record, and should have been better).

By RotoRob
Tags: Boston Celtics
This entry was posted on Sunday, December 28th, 2008 at 7:08 pm and is filed under BASKETBALL, Fantasy Notes, RotoRob. You can follow any responses to this entry through the RSS 2.0 feed. Both comments and pings are currently closed.