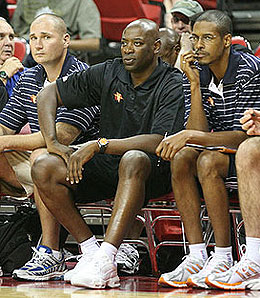 Keith Smart (centre) has been asked to move a mountain, er, improve the Golden State defense.

In case you hadn’t clued in yet (and why would you, the season is merely almost one-third complete), the Golden State Warriors are the worst defensive team in the NBA – by far. In fact, they are giving up five more points per game than anyone else. Coach Don Nelson – the bane of many a fantasy owner’s existence (just ask those who took a flyer on pre-season sleeper Marcus Williams) – has seen enough. He’s actually handed the D over to assistants Keith Smart and Sidney Moncrief in a situation where it’s basically “dudes, I can’t do anything with this…please get it out of my face.” Considering the Warriors have held opponents to under 100 points four times in 27 games this season, these guys have their work cut out for them. The fantasy lesson here? Take a look at the upcoming schedule for your team and make sure any players you own – even the marginal ones – are active if their team has a date with Golden State. For Saturday, that means the Bobcats.

The Warriors, by the way, have dropped five straight (allowing 118.6 PPG in the process) to sink to the bottom of the Pacific Division. After winning 48 games last season and just missing out on the playoffs, this team is headed for its worst campaign since 2001-02 when it won just 21 times. Hello, lottery pick!

Charlotte, meanwhile, must be licking its chops. Not only do the Cats get a chance to pad the old stats (which it could definitely use considering it averages an association-worst 90.9 PPG), but more importantly, they have a golden opportunity to build their first three-game winning streak this season. Charlotte had a disappointing year last season, and has been even worse so far this season, so it’s nice to seem the Bobcats turning it around, at least somewhat. The Cats have managed to start to build a cushion between themselves and the last-place Wizards in the Southeast Division. But a rebound from last year is still a long ways off unless this team starts to improve its own defense. This Warrior-Bobcat game has all the makings of one of those 128-126 games that leaves fantasy owners drooling in ecstasy and coaches drooling from a loss of motor control – usually a side effect of a stroke.

So the Warriors are in the midst of a five-game road trip, a place that has been oh so kind to them (3-13 away from home so far). And this is the easy stop on the trip. After this, Golden State does the Florida run before heading home to play Boston. That sounds like a good way to spend the holidays…if you’re into getting bitch-slapped, that is.

Didn’t you think a move to free-wheeling Golden State would turn Jamal Crawford into an absolute fantasy stud? After enjoying a career year in 2007-08, he was off to a nice start this year before getting dealt to the Warriors. Since then — despite getting more PT under Nellie – Crawford is averaging 2.5 PPG less. He’s taking fewer shots from downtown – and sinking them with way less frequency. It’s the inconsistency that must be driving his owners mad. Crawford went off for 29 points, nine boards and four treys on Wednesday, but Friday night he sunk just 3-of-15 for six points, while turning it over three times. We did express some doubts about his ability to duplicate last year’s totals, but that was when we assumed he’d still be a Knick.

Stephen Jackson’s hand, which has caused some seriously ugly shooting lines in recent days, has finally forced him to the sidelines. Normally a workhorse (he leads the NBA in MPG), Jackson missed Friday’s game, and will likely sit the next three games. Marco Belinelli looks like a great short-term pickup in S-Jax’s absence. The Italian guard started for Jackson Friday and went off for a career-high 27 points, continuing the best run of his career (20.3 PPG in his last four games). But as those of you who follow the Warriors know, fantasy value has a way of arriving quickly and departing even quicker with Nellie in charge, so act fast – this is a limited time offer!

Of course, Golden State is also missing its leading scorer — Corey Maggette. He’s missed seven straight games now because of recurring hamstring issues, but the team is optimistic he’ll be back some time during this road trip, which will soon be over, so I have my doubts. The move up the coast from the Clippers has not done wonders for Maggette. His three-point shooting has never been worse, and these nagging hammy problems have really sucked away his value for the first third of the season. In a deep league, there’s a chance he’s been dropped, so take a peek, because it does sound like he will be back by next weekend.

Another player that has benefited from all these injuries is sophomore Brandan Wright. In 30 minutes on Friday night, he put up a career-high 19 points with eight boards and two steals. Wright is getting more PT this year – even if it has been impossible to predict when he’ll get enough minutes to be valuable – but there’s a very good chance he’ll see extended minutes with Jackson out, so he’s worth consideration in a deeper league.

So Saturday night is a showdown between the NBA’s worst defense and the worst offense. This reminds me of the theory that if you tie a piece of buttered toast (buttered-side up) to the back of a cat and throw it off a ledge, it will suspend in mid air (given that, according to the laws of physics, a cat always lands on its feet, yet the same laws dictate that toast must always land buttered-side down). This is the dilemma of a Golden State-Charlotte matchup.

Having said how bad the Bobcat O is, let us throw them a bone and mention that they are averaging 111 PPG during this modest two-game win streak.

One of the main reasons for the turnaround has been the play of Boris Diaw. Since the trade from Phoenix, he’s stepped right in and become a huge part of the team’s offense, sending his fantasy value skyrocketing in the process. On Friday, he exploded for 26 points, sinking all four of his 3-point attempts, adding 10 boards, three assists and a steal. So far, this trade looks like the best thing that has ever happened to Diaw, so if you own him, feel free to do a jig of joy.

By RotoRob
This entry was posted on Saturday, December 20th, 2008 at 3:52 pm and is filed under BASKETBALL, Fantasy Notes, RotoRob. You can follow any responses to this entry through the RSS 2.0 feed. You can skip to the end and leave a response. Pinging is currently not allowed.