The Wire Troll: Shoppach-ing for Help 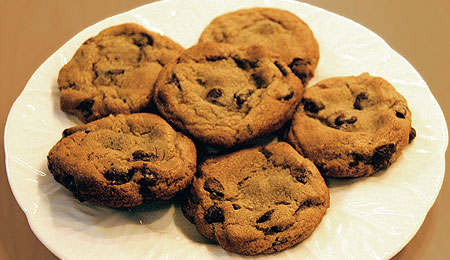 This is the true source of Tim’s fantasy baseball genius.

With Tim McLeod taking a well-deserved vacation from his disability leave (hey, eating chocolate chip cookies all day is hard work), RotoRob takes over the crafting of The Wire Troll for the next couple of weeks. Being much less fortified with Kathy’s delicious baked goods than Tim generally is, I can’t promise the same level of enlightenment, but I’ll do my best to muddle through.

Kelly Shoppach, C, Cleveland Indians: With Victor Martinez splitting time at first and catcher since his return, Shoppach has been seeing the majority of the time behind the plate in Cleveland, and frankly, he deserves the PT considering how hot he’s been. Between Wednesday and Friday, he smacked three homers to reach 20 on the year – by far a career best. Playing in one of the two games Saturday, he delivered an RBI double. Shoppach is batting .355 so far this month, and while he still strikes out too much, he’s shown improved on-base skills this season. If you need help at catcher, this could be your man. He’s still available in over 40 per cent of the leagues out there, but not for long.

Todd Wellemeyer, SP, St. Louis Cardinals: I’m really baffled why more people haven’t jumped on Wellemeyer’s bandwagon. Yes, he looked awful in July, but it’s been weeks since he turned things around with a 2.58 August and – so far – a sterling September. His last three starts (which included a visit to Houston, the hottest team in the majors, and home dates against a decent Florida offense and vs. the Cubs – the top-scoring team in the NL) have been superb: 12 hits and six runs – just four earned – allowed in 20 innings, with five walks against 13 strikeouts. That’s a 1.80 ERA for those scoring at home. The problem is, Wellemeyer is just 1-2 over this stretch – a record that impresses no one. The improvements he’s made in his control this year are for real, though, so if you need starting pitching help down the stretch, I recommended picking him up.

Ramon Hernandez, C. Baltimore Orioles: Hernandez is another hot backstop who might be able to help you down the stretch. He had hit in seven straight and eight of his past eight games before fanning as a pinch-hitter in his only at bat in Saturday’s second game, and with a .316 mark over the past week, he’s up to .303 with one homer and five RBI for September. Hernandez has stayed healthy this year, rebounding somewhat from a down year in 2007. He’s got decent pop, but if you’re in a league that tracks OBP, you’ll probably find better options.

Kevin Gregg, RP, Florida Marlins: Matt Lindstrom seems to have a nice hold on the Marlin closer job currently (so he also makes for a solid pick up), but keep an eye on Gregg, who has earned more or less flawless holds in his three appearances since returning from a knee injury last week. The word was that Gregg wouldn’t pitch in meaningful situations, but that’s obviously not the case, and given his track record in saving games the past two seasons, he’s a gamble that could be worth taking in leagues in which he’s been dropped. The key for Gregg is control; he’s battled walk problems – especially in August, when he was rocked – and that, combined with a lower K/9 this year, has hurt him. So watch those walks – if Gregg is keeping them in check, he’ll get another crack at the closer job, because he’s very tough to hit.

Jay Bruce, OF, Cincinnati Reds: After his blazing start, Bruce cooled for a couple of months, causing him to be dropped in quite a few leagues. But it looks like the rook is gearing up for a big finish. After launching seven dingers in August, so far in September, he’s already gone yard three times in the first ten games, to go along with nine runs and six RBI, a .308 BA and an 1041 OPS. Better yet, the kid is starting to show some patience and plate discipline with seven walks against just nine strikeouts. Obviously, Bruce’s keeper league status is a given, but I believe he’ll be a solid asset down the stretch in all leagues, so if he’s been dropped in your league, I’d suggest grabbing him off the wire.

Matt Thornton, RP, Chicago White Sox: Those of you seeking relief help in an AL-only league or deep keeper league – especially those tracking holds, of course – would be well-advised to cast your eyes on Thornton. Until getting touched up for a run by the Jays on Thursday, Thornton had hurled six straight scoreless outings, recording an ERA slightly over 2.00 in September. He’s emerged as a very solid set-up man this year, but what’s impressed me most is his massively increased strikeout rate. He fanned 55 batters in 56 1/3 innings last year, but this season has taken it to the next level, whiffing 72 in just 59 1/3 IP. Yes, he’s a lefty specialist (.175 BAA), but it’s not as if righties are hurting him, collectively batting just .221 against Thornton. With both Bobby Jenks and Octavio Dotel getting touched up lately, it wouldn’t shock me to see Thornton earn himself a save chance or two down the stretch.

Gabe Gross, OF, Tampa Bay Rays: If you’re in a deeper AL-only league and need some outfield assistance, Gross is definitely someone who’s been flying under the radar. He’s hit in four straight games, batting .350 in the past week, to jack his September average up to .343 with a homer, a steal and six runs. A blip? Maybe, but consider that Gross hit .293 in August with four homers, 11 RBI, 11 runs, ten walks and a steal. Since arriving from Milwaukee earlier this season, Gross has been quite productive in an extra outfielder role, and considering he’s getting most of the starts in right field for the Rays right now, I’m surprised he’s not getting more love from the fantasy community.

Doug Davis, SP, Arizona Diamondbacks: Again, few people’s idea of a fantasy stud, but Davis has proved rather serviceable over the past month, so if you need a steady starter, he might be able to help your NL-only team. After getting tattooed in the first half of August, Davis has turned the tides in his past five starts, going 2-1 with a 3.68 ERA. Okay, the 36 hits allowed in 29 1/3 IP doesn’t thrill me, but he’s only walked eight and has fanned 21 with just two dingers given up. Yup, we’re digging deep here, but I believe Davis can be an asset down the stretch.

By RotoRob
This entry was posted on Sunday, September 14th, 2008 at 12:43 pm and is filed under BASEBALL, RotoRob, The Wire Troll. You can follow any responses to this entry through the RSS 2.0 feed. You can leave a response, or trackback from your own site.