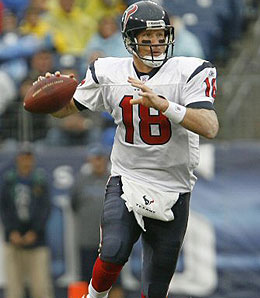 Safe Rosenfels got the job done after Matt Schaub went down.

The passing game made great strides in Houston as Matt Schaub started the 2007 season in a scorching fashion. He averaged 260 yards per game over the first six weeks and, yes, that qualifies as “scorching” for the Texans. Trust me. Schaub went down with an injury, but Sage Rosenfels actually picked up the pace quite well. In fact Rosenfels and Schaub combined for nearly 4,000 passing yards and 25 scores.

The Texans play in arguably football’s toughest division, the AFC South. Six games against three pretty good defenses can prove to be tough sledding. Also, Houston’s running game short-circuited yet again with Ron Dayne carrying the load (is it wrong to say literally here?). Injuries to Schaub and Andre Johnson stunted the offense’s growth after a positive start to the season.

The Texans are finally, if somewhat slowly, turning the corner with Gary Kubiak running the show. Houston was not wildly active in free agency and just made moves to improve depth on both sides of the ball. The team needs to get quicker at running back through the draft especially. Seriously, Dayne and Ahman Green? The secondary needs some beefing up as well.

We would love to see the Texans grab one of the talented backs in the draft, although that may be their second round plan. Whispers out of Houston all involve defensive players or offensive lineman in the first round, specifically linebacker Keith Rivers of USC and tackle Chris Williams of Vanderbilt.

Quarterbacks – The Schaub injury slowed what could have been a successful beginning to his Texan career. Nonetheless, Rosenfels was respectable under centre and gave the Texans a chance to compete. It’s Schaub’s job to lose, but he needs a healthy Johnson for the passing game to click like it did at times in 2007.

Running Backs – We will not talk about the Texans’ current running back situation, other than to say that we would really feel warm and fuzzy about a rookie being the clear-cut starter heading into the new season.

Wide Receivers – Johnson was as good as ever — when healthy, of course. That part proved to be a big issue for him because he only managed to appear in nine games. Kevin Walter provided a nice lift as the second option, although a bona fide deep threat would be a great luxury for the team.

Tight Ends – Owen Daniels continues to be a nice surprise for fantasy owners. Those of us who waited until the very last round of their draft to snag Daniels were thrilled with his 700 -plus receiving yards.

Defense/Special Teams – So how does Mario Williams versus Reggie Bush look now? Williams quieted naysayers with a 14-sack sophomore season; while linebacker DeMeco Ryans is a beast who led the team with 128 tackles. Despite having a lackluster return game, the Texans are an upcoming fantasy group.

By Andy Goldstein
This entry was posted on Monday, April 21st, 2008 at 5:31 pm and is filed under Andy Goldstein, Derek Jones, FOOTBALL, Team report. You can follow any responses to this entry through the RSS 2.0 feed. You can leave a response, or trackback from your own site.