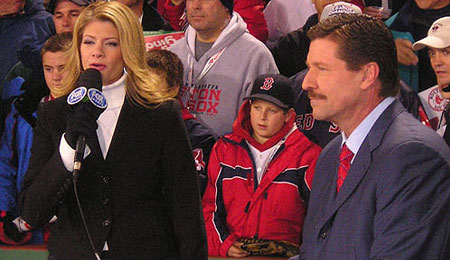 While it’s difficult to hit the cutoff man in MLB 2K8, at least you’re soothed by Jeanne Zelasko’s voice (well, if you’re Andy, you are).

When I was much younger, back in those college days, I’d have some rough weekend mornings. I’m talking about times when the only evidence of your existence from the previous evening was empty bottles. For me, there were really only two cures to mornings like that. The first was chicken nibblers, although I always referred to them as “The Nibs.” It’s probably better if I don’t expound on that one.

The other cure was Jeanne Zelasko, FOX Sports’ female answer to Joe Buck, who handled MLB pre-game duties. Major League Baseball 2K8, 2K Sports’ latest, greatest offering is helped greatly by Zelasko, who works the intro to every game you play, including weekday night games and exhibition games (and I’m okay with that, thank you). Unfortunately, much like those way-too-glary weekend mornings, MLB 2K8 suffers from a bit of unevenness.

Where other baseball games over the years have done their best to simplify the sport, MLB 2K8 takes the less traveled path of actually making the act of throwing a baseball harder than it really is. Forget pitching, just tossing the ball from the outfield to the infield takes a few games to accomplish with any consistency. After many games played, I’m still not really sure how to effectively call for a cut-off man to actually cut the ball off. Obviously, with the level of difficulty for such routine aspects of the sport, 2K8 isn’t the most accessible sports title out there.

Of course, this is a baseball video game, so I think it’s written in the rules of sports reviews that the pitching and hitting methods are examined (clearly, I haven’t read those rules). As for the former, MLB 2K8 gets very close to nailing it. Pitching requires a series of timed analog stick movements. You need concentration, timing, and an ability to closely follow expanding and contracting rings to master the game’s pitching (I know, I know, that sounds really fun). It’s not easy by any stretch, but it’s actually a rewarding style of gaming. Pitching shouldn’t be easy. It shouldn’t require merely selecting a type of pitch and location. MLB 2K8 gets that. One issue for me was the lack of control of pitch type and location. If I want to throw a devastating table-drop curve on a 1-2 count, then I should be able to without worrying the catcher will be expecting a high-and-outside fastball.

Hitting, on the other hand, has much less than meets the eye. Basically, the offensive process involves little more than timing your “step” and “swing.” Normally, I’d want more control, but after spending untold hours cursing and struggling with the whole cut-off man fiasco, a little breather is nice.

MLB 2K8 does have an interesting “batter’s eye” concept which entails sort of guessing where a pitch will be before the pitcher’s wind up. If you call it right, you have a better chance of driving the ball. The more contact-driven the hitter, the bigger the “eye.” If a count is at 3-0, the “eye” is very large. If you’re in the hole, it’s teeny-tiny. If you’ve got Adam Dunn up and an 0-2 count, you really don’t have an “eye” anymore, which sounds about right to me.

As I mentioned above, the dialogue and overall sound of the game really shines. Jon Miller and Joe Morgan handle the commentator duties, and that could raise some eyebrows. I mean, there are some who actually think Morgan is something of a, oh I don’t know, blowhard. What’s funny (Morgan might even call it ‘ironic,’ although he’d be wrong) is that Morgan’s style (for lack of a better word) really feels natural and it comes through. A play will happen, Morgan will say something bizarre, and Miller will try to make it work. It’s exactly like watching a game on ESPN.

Also of note is the “soundtrack” that the game uses. Apparently 2K Sports outsourced that job to Pitchfork Media. I will come clean and admit I am a Pitchfork whore. In fact, while writing this review, I’ve listened to The Battles, The Flaming Lips, and LCD Soundsystem, all of whom are featured in the game’s menu screens and sometimes over stadium loudspeakers. It’s a nice modern touch, although hearing the same 16 songs over and over again does tend to get old after a few hours. I assume the megabites were tough to come by, but another 15 or 30 songs would have been great.

Which brings us to the online product. The game changes drastically when you enter the intertubes. Unfortuantely, it’s not by design. The main problem is that the pitching system (which I love!) requires pin-point accuracy and timing. The second you and your opponent’s modems get a hold of that aspect of the game, everything goes to hell. Every pitch becomes a lob, which actually is okay because timing the swing is also impossible. An extra bonus is going back to normal offline play is difficult because of how much overcompensation you get used to.

If you are a baseball fan and own an Xbox 360, this is your game. That’s more due to the fact that MLB 08: The Show isn’t available on Microsoft’s gaming system. Overall, this is certainly a competent game and it always feels pretty fair, unless you’re playing online with laggy opponents. And if all else fails, you can just close your eyes and listen to Zelasko for hours on end.