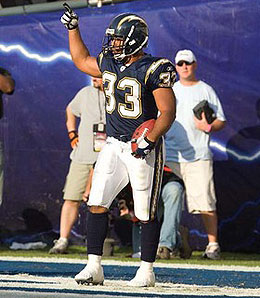 Since we last checked in on the Atlanta Falcons in late-February, much has changed.

At the time, we expected Jerious Norwood to finally get his shot at being an every down runner. Well, now it appears that may not happen. Oh, don’t worry, 2007 leading rusher Warrick Dunn’s days in Atlanta are over after his release. But now the Falcons have added another runner – perhaps the best back-up man in the game and one who fantasy owners have long desired to see get his shot.

Last month’s signing of Charger backup Michael Turner to a six-year. $34.5 million deal gives the Falcons two runners who have each excelled in limited opportunities.

We have been waiting for Turner to get his chance to be the man, but for four years he’s been stuck behind the best in the biz in LaDainian Tomlinson.

But with Mike Smith now manning the reins in Atlanta, he may opt to install a similar situation that existed with Maurice Jones-Drew and Fred Taylor in Jacksonville, where Smith was defensive coordinator before landing the head coaching job for the Falcons.

If Smith goes that route, it could completely cannibalize the fantasy value of both Turner and Norwood.

This is situation that will need to be closely watched during training camp. Will they get 12 to 15 carries per game each, or will one of them have 20 or more to the other’s five-to-seven carries?

Atlanta’s rush offense was abysmal last year, ranking 26th in yards per game. Of course, it’s not as if the Falcons relied on this aspect of the game, with just three teams rushing less often.

Expect the team to rush way more often this year, with the QB situation still muddied.

It’s obvious Michael Vick (despite reports he’s staying in shape in the Big House) is never coming back to the Falcons. Chris Redman is no one’s idea of a real answer. It’s clear the team is leaning towards Boston College QB Matt Ryan in the upcoming draft, and while that would provide a long-term solution, the kid won’t likely be ready to have an instant impact.

That leaves Turner and Norwood to carry the offense.

My guess is that Turner, given that he was handed $15 million in guaranteed coin, will be afforded every chance to establish himself as the No. 1 man. But Norwood’s game-breaking speed remains an intriguing, if underutilized asset.

Watch this position battle closely this summer, as it’s going to be among the most fascinating in the league.

Meanwhile, the Chargers will be hard-pressed to replace a backup of Turner’s ilk. Darren Sproles will be ask to fill that role, which will be fine as long as LT doesn’t miss extended time.

By RotoRob
This entry was posted on Monday, April 7th, 2008 at 2:39 pm and is filed under FOOTBALL, RotoRob, Transactional analysis. You can follow any responses to this entry through the RSS 2.0 feed. You can leave a response, or trackback from your own site.