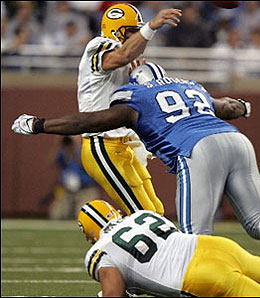 Jon Kitna provided fantasy owners with, if nothing else, a legitimate fantasy backup last season. Assuming you needed one start out of your backup, Kitna was a decent enough resource. The fantasy football gods had little mercy on your soul if you were relying on any Lion as an every week option. The NFC North was so bad that the division’s overall record made Detroit’s season look significantly better than it was. We’ve never seen a quarterback throw for 4,000 yards in a season and have no one on the team with even a serviceable season for fantasy purposes. How the hell does that happen?

The schedule was none too friendly to Detroit after a 6-2 start. Games against Green Bay twice, the Giants, Cowboys, and Chargers paved the way for a mortifying finish. Kitna threw for over 4,000 yards, but no Lion receiver eclipsed the 1,000-yard mark on the season. Meanwhile, Detroit’s run game ranked 31st in the league by averaging an anemic 80 yards per game. To the surprise of no one, Detroit’s defense was awful again. It ranked last in points allowed per game (27.8) and yards allowed per game (377.6). Oh, we almost forgot. You can probably blame Lions’ general manager Matt Millen as well. Sorry, Matt. I know we’re piling on here, but it seemed like the right thing to do.

While the offense has holes, the defense deserves much of the off-season attention. Unfortunately, however, the Lions are not exactly salary cap experts. Detroit entered the offseason with just under $18 million of cap space; which does not give the team a ton of maneuverability. Hence, defensive improvements must continue in the draft. Defensive tackle Shaun Rogers was traded to Cleveland in exchange for cornerback Leigh Bodden. Yet, Millen and company have a long way to go towards rebuilding the defense. Offensively, the Lions tried to address the running game by releasing injury-prone running back Kevin Jones. However, the cupboard is extremely bare at the position. The Lions need depth at the running back position. Here’s hoping they don’t draft another wide receiver in the first round.

NFL Draft Countdown has one of the many talented runners going to the Lions in the first round. We have absolutely no problem with that, as Jones had certainly worn out his fantasy welcome. This means Rashard Mendenhall, Felix Jones, or even Jonathan Stewart could be Motor City bound.

Quarterbacks – Kitna will be back again, but his biggest problems may be the porous offensive line and the horrendous running game. No quarterback was abused more last season than Kitna, sacked 45 times and hit another 38 occasions. The veteran signal caller needs support despite have a good set of wide receivers. Asking him to drop back 30 to 40 times a game is asking a lot for a guy who has little mobility. If the pass protection improves, Calvin Johnson grows in his second season and Roy Williams is productive, the Detroit passing game should make some sweet music in Motown City.

Running Backs – Jones is out and Tatum Bell is in? They’ve got to draft a rookie runner, right? This has to happen. If they start the season with Bell as their starting back, we quit and we’re going to start actually watching the AFL.

Wide Receivers – Johnson showed just enough in his rookie year that every other team in the NFL assumed Williams was available. While the Lions might have been listening to offers, he’s still on the team, and it’s still the only offensive position that offers fantasy owners any intrigue. Both suffered minor injuries during the season and both are capable of taking over games this season. We’d go with Johnson just because his ceiling is less known, and we like to gamble.

Tight Ends – You can move right along to defense.

Defense/Special Teams – Detroit’s defense was a failure in ’07, while the special teams provide no punch with kick or punt returns. Ultimately, the Lions’ defense/special teams unit should be in the free agent pool of most fantasy leagues.

The Skinny – Both Johnson and Williams are capable of 1,000-yard seasons, and if they can both stay healthy, they might actually both accomplish it. Especially since the running game stands to be such a disaster.

By Andy Goldstein
This entry was posted on Friday, April 4th, 2008 at 4:46 pm and is filed under Andy Goldstein, Derek Jones, FOOTBALL, Team report. You can follow any responses to this entry through the RSS 2.0 feed. Both comments and pings are currently closed.