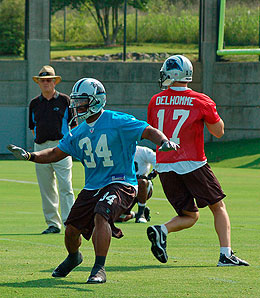 We’re praying that DeAngelo Williams gets enough carries in 2008 to be a useful fantasy option.

DeAngelo Williams finally showed us that little something we’ve been waiting for! He carried a measly 144 times, but amassed 717 yards, good for five yards per jaunt. Now we just need to see the carries go up to 300, let the average slide to 4.5 and we’ll all be happy. This can happen! Someone has to believe me!

The term disappointment seems to follow the Carolina Panthers. Another sub par campaign in Charlotte quelled Super Bowl hopes. Apparently, the Panthers believe that Steve Smith is good enough to carry the offense by himself. Yet again, they were sadly mistaken. Jake Delhomme got injured again, the fact that the ancient Vinny Testaverde and David Carr took significant snaps for the team in ’07 was an abomination, and the annually overhyped Panthers defense failed to deliver on pre-season promise.

This is something RotoRob addressed last month, but it’s time for Carolina to let go of 2003. Delhomme led a great run, but they didn’t win the Super Bowl. It almost seems as if this team tried to catch lightning in a bottle to get back to the big game with a roughly similar team. The offseason provided a mixed bag. Wide receiver Muhsin Muhammad is back, but Pro Bowl defensive tackle Kris Jenkins was dealt to the Jets. The underachieving Keary Colbert is out, but former Seattle wideout D.J. Hackett is in. The team also waved goodbye to linebacker Dan Morgan and maddeningly inconsistent DeShaun Foster. In all, Carolina needs to trim the fat and rebuild through the draft. It appears the Panthers are on their way towards that accomplishment.

No one tell the Panthers that they should actually give Williams 20 carries per game this season. We might jinx it. Offensive linemen Ryan Clady and Chris Williams will be available for the Panthers, and they’d do well to consider either. We feel like we’re watching The Price Is Right’s Plinko with this team. We badly want Williams to be given a shot at handling the premier back role, and every random bounce downward, it seems as though that’s the final resting place. But somehow we won’t believe it until we see the final stats from their Week One game.

Quarterbacks – Carolina needs to end the Delhomme era. Unfortunately, it is apparently not coming to grips with this concept. He’s coming off Tommy John surgery, which is a difficult injury to rehabilitate. According to reports, he should be ready to go in 2008. He actually played well through the 2007’s first three games with eight touchdown passes to just one interception, but Delhomme has missed games the last two seasons so he’s starting to become a health risk. Carr was released and Testaverde retired. The team needs insurance at the back-up QB position.

Wide Receivers – Smith and a healthy Hackett (rumour has it that there is such a thing) make for a very talented duo. Unfortunately, the “if he stays healthy” qualification extends to Delhomme as well, as discussed. Oh, and the offensive line. And the defense. Umm, yes, maybe this is why the Panthers always disappoint.

Tight Ends – Jeff King played as well as anyone could have hoped, but that was mainly as a third-and-short option. Once the Panthers got to the goalline, they went more for the “kicking field goals” option, limiting King’s overall value.

Defense/Special Teams – The trio of Mike Rucker, Julius Peppers, and Kris Jenkins was wildly unproductive a season ago. Carolina’s vaunted defensive line did little to help a unit that finished 16th overall. Panthers’ special teams offers little in explosiveness while kicker John Kasay will be back yet again.

The Skinny – We’re actually optimistic that the Panthers can be big fantasy contributors in both the receiving and running games. Of course, Carolina usually is most attractive to the fantasy world in the offseason. Then the games actually start and everything goes to hell.

By Andy Goldstein
Tags: Carolina Panthers
This entry was posted on Monday, March 31st, 2008 at 1:57 pm and is filed under Andy Goldstein, Derek Jones, FOOTBALL, Team report. You can follow any responses to this entry through the RSS 2.0 feed. Both comments and pings are currently closed.