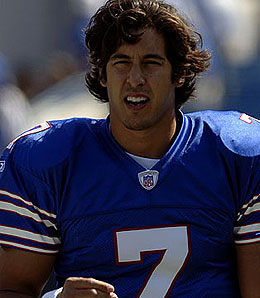 Clearly, J.P. Losman is not the long-term answer at QB in Buffalo.

While the passing game had woes on top of woes, the running game performed about as we expected. Marshawn Lynch nearly hit the 1,200-yard mark despite missing a handful of games. In fact, his steady-as-she-goes season featured at least 60 rushing yards per game and spread out seven scores over seven games. As a second back (or flex option), we would argue Lynch helped fantasy teams gain titles more than fellow rookie Purple Jesus did. What? You forgot that after Week Nine, Adrian Peterson had four games with under 50 rushing yards and no scores? Yeah, endless SportsCenter highlights can do that to the average sports fan. Anyway, we already have Lynch as a sure-fire top 15 back with a ceiling that’s pushing the top seven or eight. Just imagine if the Bills had a passing game that gave opposing linebackers (or hell, even secondaries) pause.

One argument we always get in is over J.P. Losman. I did not like him in college and I do not like him in the NFL. His ability is lacking and seemingly the Bills finally caught on to this shocking concept during 2007. Outside of a respectable season in 2006, Losman has done very little to show that he is Buffalo’s quarterback of the future. How do you like Losman now, Goldstein? Quarterbacks were only a part of the struggles for an offense that ranked 30th in points scored, total yards and passing yardage. The woes continued on defense as Buffalo finished 31st in total yards allowed. Failure to pressure the quarterback (26 sacks) and a defense devoid of making big plays haunted the Bills in close loses to Denver and Dallas. Amazingly, Buffalo still found itself in the playoff mix in December.

As bad as Buffalo’s offense looked at times last season, it’s the defense that received the off-season makeover. Former Giants’ linebacker Kavika Mitchell, cornerback William James and Pro Bowl defensive tackle Marcus Stroud join the team via free agency, which should improve a mediocre unit. The Bills trimmed some of the dead weight on the other side of the ball by releasing unproductive wide receiver Peerless Price. In turn, picking up a veteran receiver would not be a bad idea.

We think the Bills might be a prime candidate to move down. The wide outs will last to the middle or end of the round, and Buffalo needn’t waste a top 15 pick that would, at best, raise the Bills to a .500 team. NFL Draft Countdown suggests Dominique Rodgers-Cromartie, cornerback from the Vols, is the pick. We have faith in the Bills. Really, we do. A little positive thinking never hurt anyone.

Quarterbacks – Reportedly, Losman has asked the team to be traded as it seems Trent Edwards will get the nod as the opening day starter. He gives the Bills a better chance to win than Losman, who brought next to nothing to the table. While Losman had a better quarterback rating (76.9 to 70.4), Edwards’ struggles towards the end were in part due to playing in bad weather games against the Browns, Giants, and Eagles. Edwards has a ceiling from a fantasy perspective this season because of the lack of weapons in the passing game and inexperience. Playing in the northeast doesn’t help matters either, but the Bills are on the right track plugging him in as the starter.

Running Backs – As we said above, we are sipping the Lynch Kool-Aid. The Bills had one of the toughest schedules in terms of opposing run defenses last season, facing the second, third, fourth, sixth, seventh and eighth best teams statistically. They also had to line up against their division rival Patriots, ranked 10th against the run, twice. Yeah, Lynch can be a top seven back against a normal schedule.

Wide Receivers – Playing with crappy quarterbacks is only partially to blame for Lee Evans’ struggles. Yes, the Bills played tough defenses, but Evans should have found a way to make some big catches. As it stands, we have him somewhere in that 15-20 range for wide outs, but that could change either way depending on what moves the Bills make in the draft.

Tight Ends – Nope, nothing to see here. Two guys you don’t know (and neither do we) split up 50 catches, 450 yards, and five scores. Maybe if they combined into one person, we would care.

Defense/Special Teams – Any way you slice it, the Bills’ defense collapsed throughout last season. Stopping the run was a problem and stopping the pass was a problem. The Bills made strides in the offseason to fix those issues heading towards ’08. The special teams is solid with the combo of Roscoe Parrish and Terrence McGee in the return games. They are both explosive and have the potential to break one.

By Andy Goldstein
Tags: Buffalo Bills
This entry was posted on Thursday, March 27th, 2008 at 5:30 pm and is filed under Andy Goldstein, Derek Jones, FOOTBALL, Team report. You can follow any responses to this entry through the RSS 2.0 feed. Both comments and pings are currently closed.