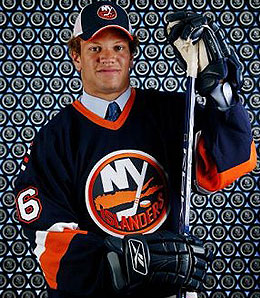 The future has arrived on the Island in the form of Kyle Okposo.

The beauty of an NHL system that lets more than half of the teams into the playoffs is that it makes it very exciting to watch those teams struggling to not be left out of the party. And, of course, struggle makes for both offense and injuries, the sad yin and yang of fantasy hockey.

Boston Bruin Marc Savard, an increasingly gifted scorer and puck-disher (15 goals and 63 assists), is out with a broken bone in his back, after taking a cross-check against Montreal. The Bruins are saying he’ll miss at least two games, which seems a bit conservative given that it’s a broken bone in his back. It’s not like the guy chipped a tooth. So if Savard is in your lineup, you might want to keep an eye on the situation.

Philadelphia Flyer Mike Richards has been feeling pretty good since returning to the lineup from a hamstring injury. He’s put up five goals in six games and has 71 points on the season. More importantly, the time off seems to have done him some good after a slow February.

The Buffalo Sabres just can’t catch a break. They can’t hold onto half of their players for financial reasons and the players they do have get injured. Tim Connolly is the latest victim, out not only for the rest of the regular season, but also for the playoffs, which luckily for Buffalo doesn’t seem like a big deal, since its outside of the playoff bubble. Connolly, the 1999 first-round draft pick, wasn’t an offensive juggernaut, but he put up decent enough numbers (seven goals and 33 assists in 48 games).

If you’re a little bit of a gambling fantasy player, you might consider taking a chance on Islander propsect Kyle Okposo. Okposo, the Islanders’ first-round draft pick in 2006, left the University of Minnesota early to sign with the Isles, and now that they’ve pretty much given up on any kind of playoff run, he’s seeing some NHL time and not looking too out of place. He’s got a goal and two assists in his first five NHL games. Factor in Islanders’ coach Ted Nolan needing some kind of hook to get a contract extension. Everyone knows there’s no better way to get re-signed (other than winning), than having the organization’s top prospect be a fan. How do you make a rookie like your coaching? Give him a lot of scoring chances and power play time.

Over in the Western Conference, St. Louis Blue Paul Kariya has gone stone cold. His last goal was on Valentine’s Day. That’s February 14, for those of you who shun the Hallmark-manufactured holiday. And now, it’s almost April. Kariya has 57 points on the season, and you have to figure with a goal drought this long, he’s bound to score eventually. But he might not be the best choice for your roster, given pretty much any other option.

Detroit Red Wing Johan Franzen continues his red-hot March. How’s this for a fantasy stat? There were only two games in March in which he didn’t score. And in one of those games, he still picked up an assist. So Franzen continues to be a great option if you’re smart enough to have on your roster.

By Steven Ovadia
This entry was posted on Friday, March 28th, 2008 at 3:33 pm and is filed under HOCKEY, Ice Chips, Steven Ovadia. You can follow any responses to this entry through the RSS 2.0 feed. You can leave a response, or trackback from your own site.